“This is yet another reminder of the major risks posed by offshore drilling for dirty, dangerous fossil fuels we increasingly don’t need.” 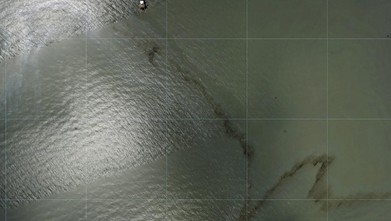 Photos captured by National Oceanic and Atmospheric Administration aircraft August 31, 2021 and reviewed by the Associated Press show a miles-long black slick floating in the Gulf of Mexico near a large rig. (Photo: NOAA via AP)

As Louisiana residents and officials begin the recovery process in the wake of Hurricane Ida, environmental campaigners responded Thursday to reporting of a suspected oil spill in the Gulf of Mexico by saying such scenes “are reminders that when we drill, we spill.”

“On top of the devastation that people are still experiencing onshore, we are now learning about an oil slick in the Gulf, not far from the Louisiana coast,” said Kelsey Lamp, Protect our Oceans campaign director with Environment America, in a statement.

“The Americans whose lives Ida has upended have enough to deal with already—they shouldn’t have to worry about poisoned ocean life and polluted shorelines,” she declared.

The campaigner’s comments came in response to the Associated Press reviewing aerial survey imagery from the National Oceanic and Atmospheric Administration (NOAA) showing “what appears to be a miles-long oil slick near an offshore rig” following the Category 4 hurricane.

“The government imagery, along with additional photos taken by the AP from a helicopter Tuesday, also show Louisiana port facilities, oil refineries, and shipyards in the storm’s path where the telltale rainbow sheen typical of oil and fuel spills is visible in the water of bays and bayous,” the news outlet noted.

According to the AP:

Both state and federal regulators said Wednesday that they had been unable to reach the stricken area, citing challenging conditions in the disaster zone.

The NOAA photos show a black slick floating in the Gulf near a large rig with the name Enterprise Offshore Drilling painted on its helipad. The company, based in Houston, did not respond to requests for comment by phone or email Wednesday.

Aerial photos taken by NOAA on Tuesday also show significant flooding to the massive Phillips 66 Alliance Refinery along the bank of the Mississippi River, just south of New Orleans. In some sections of the refinery, rainbow sheen is visible on the water leading toward the river.

Lamp said that “this is yet another reminder of the major risks posed by offshore drilling for dirty, dangerous fossil fuels we increasingly don’t need because of our increased capacity for solar and other renewable energy.”

“Simply put, when oil companies drill, they spill,” she added. “That’s why we are continuing to urge the Biden administration to consider the true cost of offshore drilling, and end the practice for good.”

The deadly hurricane—the remnants of which wreaked havoc on the New York City area overnight Wednesday, causing more deaths and damage—hit as the Biden administration resumed leasing sales for public lands and waters.

In addition to taking aim at the government policies enabling planetary destruction, activists are calling out the corporations responsible for polluting the air, lands, and waters.

Regarding the suspected spill off the Louisiana coast, Lamp said that “we urge the owners of nearby rigs to act quickly to assess and resolve the situation. And we urge the government to act with great speed to determine the source of the slick and address the risk it poses to marine and shoreline wildlife in the Gulf.”

That potential spill isn’t the only pollution generating concern after Ida, as the New York Times reported Wednesday:

A fertilizer plant battered by Hurricane Ida belched highly toxic anhydrous ammonia into the air. Two damaged gas pipelines leaked isobutane and propylene, flammable chemicals that are hazardous to human health. And a plastic plant that lost power in the storm’s aftermath is emitting ethylene dichloride, yet another toxic substance.

Early incident reports filed with the federal authorities are starting to paint a clearer picture of the damage wrought by the hurricane to Louisiana’s industrial corridor, complicating relief efforts and adding to the conditions that make it perilous for residents to return.

Shortly after Ida—which one reporter described as “the poster child for a climate change-driven disaster”—struck Louisiana, Sunrise Movement executive director Varshini Prakash charged that “Biden must declare a climate emergency to mobilize the federal government towards addressing these climate disasters and tackling the climate crisis head on.”

Following the fatal flooding in and around New York City, the youth-led climate group pointed to the storm as evidence that the president and Congress can’t compromise on a $3.5 trillion Build Back Better reconciliation package Democrats are developing to pass without GOP support.

“New York is collapsing, New Orleans is still powerless, our loved ones are still missing, and compromise on our infrastructure is still on the table. This is unacceptable,” said Sunrise communications director Ellen Sciales, whose family home flooded late Wednesday. “We are running out of time to act on the climate crisis and we need a Green New Deal now.”