“Our nation’s infrastructure is not built to a standard that protects against the level of flood risk we face today, let alone how those risks will grow over the next 30 years as the climate changes,” said one expert. 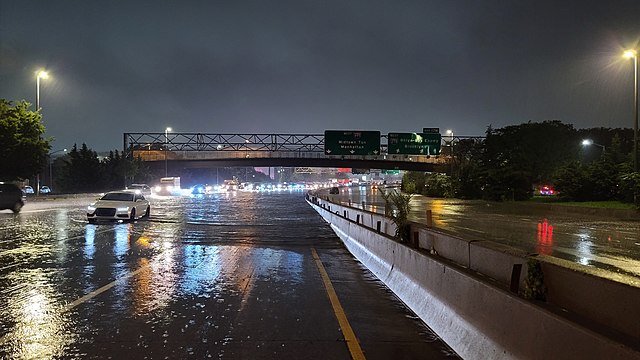 Underscoring the need to slash greenhouse gas emissions and invest in public goods to better prepare communities across the United States for escalating extreme weather, a new report released Monday finds that one-quarter of the nation’s “critical” infrastructure is already susceptible to flooding that renders it inaccessible, with risks projected to increase in the coming decades.

Described as the first-ever nationwide evaluation of community-level vulnerability to flooding, the report—Infrastructure on the Brink, compiled by the First Street Foundation, a nonprofit research group that specializes in environmental risk assessment—highlights localities where housing, commercial real estate, transportation networks, schools, hospitals, power plants, and other pieces of infrastructure face operational flood risk in 2021.

The analysis also explores how spatial patterns of flood risk are expected to change over the next 30 years, as the fossil fuel-driven climate emergency exacerbates sea-level rise and extreme rainfall events, which pose direct and indirect threats to the safety and well-being of people throughout the U.S.

“It is clear, now more than ever,” the report states, “that the ways and places in which we live are likely to continue to be impacted by our changing environment. One of the most important implications in this development is the vulnerability of our national infrastructure.”

Using a unique national database that contains parcel-level flood risk information—combining hazards, exposure, and vulnerability—as well as over 20,000 flood adaptation measures, the report maps Americans’ current and future flood risks based on their proximity to coasts and flood plains plus the estimated impacts of flood-damaged infrastructure at the broader scales of neighborhoods, zip codes, cities, and counties.

As the authors note, “Individuals whose homes were spared the impact of a particular flood event are increasingly likely to find their local roads, businesses, critical infrastructure, utilities, or emergency services affected.”

Defining risk as “the unique level of flooding for each infrastructure type relative to operational thresholds,” the report finds:

The report comes in the wake of several highly destructive flooding events that affected various parts of the U.S. this summer, including one in Tennessee in August as well as the inundation of New York City’s subway system in July and again in September during Hurricane Ida—deadly and costly disasters that exposed how ill-prepared the country is to reduce extreme weather-related infrastructure damage and the ensuing consequences.

The new analysis also points to earlier catastrophes, such as Hurricane Sandy, which hit the New York City metropolitan area in 2012 and “flooded hospitals, crippled electrical substations, overwhelmed wastewater treatment centers, and shut down power and water to tens of millions of people.”

“Our nation’s infrastructure is not built to a standard that protects against the level of flood risk we face today, let alone how those risks will grow over the next 30 years as the climate changes,” Matthew Eby, founder and executive director of the First Street Foundation, said in a statement.

“This report highlights the cities and counties whose vital infrastructure are most at risk today and will help inform where investment dollars should flow in order to best mitigate against that risk,” Edy added.

There are significant differences at the county and city level in the amount of risk that exists today and into the future. Most importantly, there are a group of counties and cities that have persistent patterns of vulnerability across multiple dimensions of physical risk from flooding. These areas tend to be in regions with well-established flood risk, such as coastal flood plains along the Gulf and Southeastern coasts of the U.S., but also in less well-known flood zones, such as in the Appalachian Mountain regions of West Virginia and Kentucky.

To that point, 17 of the top 20 counties in the U.S. which are most at risk (85%) are in the states of Louisiana, Florida, West Virginia, and Kentucky. Additionally, the top cities at risk of flooding persistently show up in the states of Louisiana, Florida, Texas, and South Carolina. The analysis further uncovered a high degree of vulnerability in some of the major population centers in the U.S., including New Orleans, Miami, Tampa, Charleston, Chicago, and Los Angeles.

Even as extreme storms and material insecurity become more common and severe—rendering continued inaction far more expensive than prevention—congressional Republicans and a handful of conservative Democratic lawmakers swimming in corporate cash continue to fight against the Build Back Better Act, a President Joe Biden-endorsed proposal to invest trillions in strengthening climate action and expanding the nation’s relatively underdeveloped welfare state.

“The decarbonization question, the infrastructure question, and the inequalities question are the same question,” Daniel Aldana Cohen, assistant professor of sociology at the University of California, Berkeley, tweeted last week. “Only an epic struggle from the left, combining mass organization, mobilization, and technical expertise—across borders—can provide a good answer in the 2020s.”