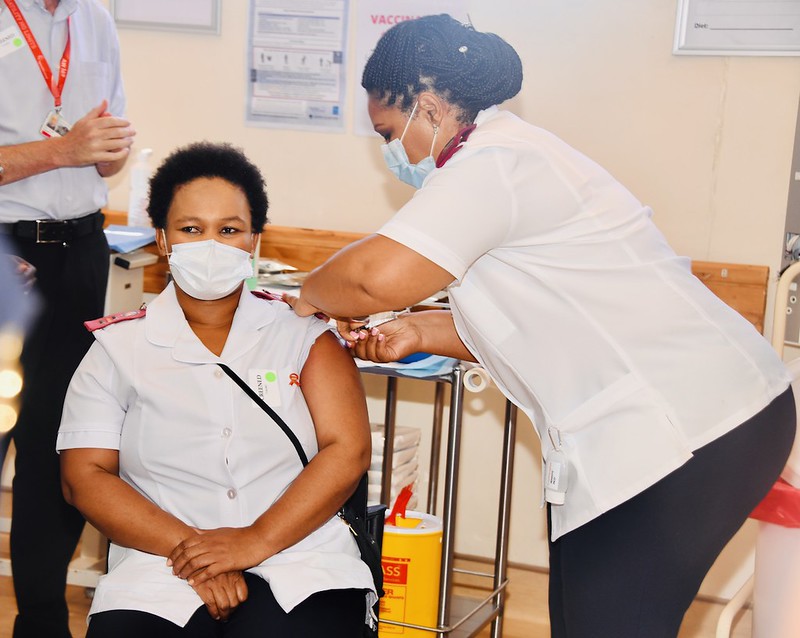 According to a Public Citizen review of Centers for Disease Control and Prevention data, around 37 million people have received a booster shot in the U.S., which has authorized boosters for its entire adult population.

Zain Rizvi, research director at Public Citizen and author of the new analysis, said the figures throw the global inoculation gap into sharp relief and further demonstrate that the U.S. remains well short of its promise to act as the world’s vaccine “arsenal.”

“The emergence of the new coronavirus variant, Omicron, has exposed the risks of an unvaccinated world,” said Rizvi. “Since the start of the pandemic, the U.S. has sent 11.2 million doses to those eight countries in southern Africa. That is less than what the U.S. distributed at home in one week in November (Nov. 17 – 24).”

37.5 million Americans have got a booster dose of a COVID-19 vaccine.

30.3 million people in the eight African countries where the U.S. imposed a travel ban have gotten *one* dose of a vaccine.

Here’s the overall vax status of those countries, too. https://t.co/OoFXrQyUv8 pic.twitter.com/nFizaTzcel

In August, the Biden administration dismissed the WHO’s call for a temporary moratorium on booster shots, a demand aimed at freeing up additional vaccine supply for low-income nations that have been denied sufficient access. White House Press Secretary Jen Psaki said the WHO’s recommendation presented a “false choice” between boosters and adequate global vaccination.

“But until the U.S. government uses its power under the Defense Production Act to share the vaccine recipe and make surge investments in global vaccine production,” Rizvi argued Monday, “that choice will remain true—and only become increasingly stark.”

The Public Citizen analysis was published as President Joe Biden said in a speech that the Omicron variant is “a cause for concern, not a cause for panic,” stressing that “we have the best vaccine in the world, the best medicines, the best scientists.”

But the president’s words were likely cold comfort for nations that don’t have enough vaccine doses in large part because of hoarding by rich countries—including the U.S.—and pharmaceutical companies’ refusal to share key technology. Just 27% of all health workers on the African continent have been fully vaccinated against Covid-19, according to the WHO.

Robbie Silverman, senior manager of private sector advocacy at Oxfam America, said in a statement Monday that the emergence of the Omicron variant “affirms what many of world’s leading scientists, public health officials, doctors, nurses, and economists have been saying since the beginning of the pandemic: if we do not vaccinate the world as quickly as possible, Covid will continue to threaten us all.”

“Our leaders’ failure to help bring the vaccines to everyone, everywhere will keep us on a cruel and never-ending cycle of illness, death, and economic suffering. Omicron must be the wake-up call. We need President Biden to lead in negotiating a comprehensive TRIPS waiver at the [World Trade Organization] and press for the sharing of all vaccine technologies immediately. No one is safe until everyone is safe.”