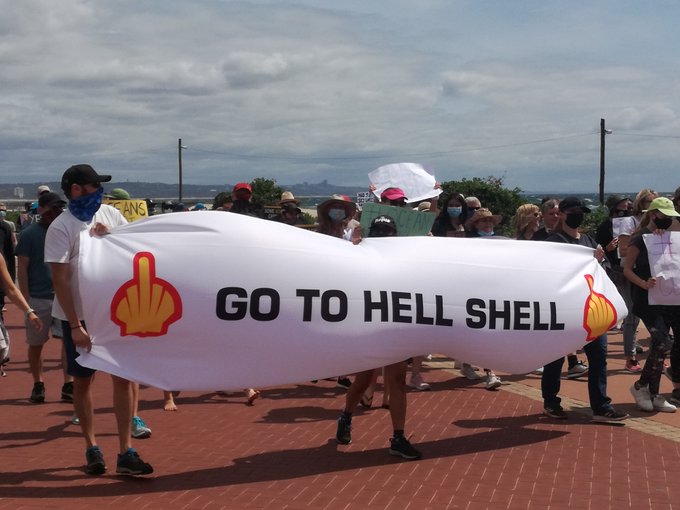 “The extraction [of oil and gas] would bring devastation to the at-risk marine life, to local fishers whose livelihoods depend on the natural ecosystems and fish stocks, and [to] the communities on the coast of the Eastern Cape,” Project 90 by 2030, a South African social and environmental justice organization, told Metro.co.uk.

The timing of Shell’s planned blasting is especially concerning to opponents. The fossil fuel corporation has hired Shearwater GeoServices to begin surveying off the Eastern Cape’s virtually untouched Wild Coast on December 1, during whale season.

An Oceans Not Oil petition—signed by nearly 350,000 people, calling on Barbara Creecy, South Africa’s minister of Forestry, Fisheries, and the Environment to revoke Shell’s permit—explains that for four to five months, a seismic testing vessel will “drag up to 48 air guns methodically through 6,011 square kilometers of ocean surface, firing extremely loud shock wave emissions that penetrate through 3 kilometers of water and 40 kilometers into the Earth’s crust below the seabed. The ship will work around the clock, firing the air guns every 10 seconds.”

Shell’s underwater explosions would occur as southern right and humpback whales—which migrate each year to southern Africa’s warmer waters, where they mate and rear calves from June to December—start returning to Antarctica, with potentially devastating effects.

Resistance to Shell’s planned seismic blasting has been growing. Over 100 activists, including some from Extinction Rebellion Cape Town and Oceans Not Oil, held a protest on November 21, which is “when Shell’s ship, the Amazon Warrior, arrived in Cape Town’s harbor,” Metro.co.uk reported, adding that “several other demonstrations have taken place in different parts of the country throughout the week.

In addition to highlighting the likely psychological and physiological damage inflicted on marine animals, opponents of underwater explosions have “tried to bring attention to how local fishing communities would be affected if Shell finds what it is looking for and starts to mine oil and gas,” the news outlet noted.

Natalie-Jane van Wyk, another fisher from Saldanha Bay, said that “we are familiar with the marine species that live and breed here and are not willing to risk these for a bit of electricity that could be generated in a number of other, more sustainable ways that do not threaten fisher jobs.”

Moreover, according to Judy Mann, a conservation strategist at the South African Association for Marine Biological Research’s Oceanographic Research Institute, the fast-flowing current off the coast of the KwaZulu-Natal province makes it almost impossible to contain any normal operational or major accidental oil spillage should drilling eventually take place.

Noting that “Shell’s oil and gas exploration on South Africa’s Wild Coast will be destructive for people and nature,” Greenpeace argued that “the best way to mitigate the effects of seismic blasting is NOT TO DO IT!!”

⛔ URGENT ⛔@Shell’s oil and gas exploration on South Africa’s Wild Coast will be destructive for people and nature.

The best way to mitigate the effects of seismic blasting is NOT TO DO IT!!

“We cannot allow climate criminals, like Shell, to plunder in the name of greed,” reads a Greenpeace petition urging Gwede Mantashe, South Africa’s minister of Mineral Resources and Energy, to stop Shell from surveying the area. “We cannot allow them to lock us into a fossil-fueled future, when South Africa needs a just transition to renewable energy to create greener jobs, reduce emissions, and solve our energy crisis.”

New Frame, a social justice publication based in Johannesburg, South Africa, reported that local subsistence fishing communities “are planning protests and there are indications that some groups may seek a court interdict. A march along Wild Coast beaches on Sunday, December 5 starts at the Mzamba River Estuary, according to Amadiba Crisis Committee co-founder Nonhle Mbuthuma.”

The committee, which has also been resisting plans for a new toll road and dune mining operations along this coastline, were surprised that Shell would start a new oil and gas exploration project barely a month after the COP26 climate conference in Glasgow, Scotland.

“As a part of Operation Phakisa, Shell’s project has been allowed by our government, as if the threat of global heating from burning more and more fossil fuels doesn’t exist,” said Mbuthuma. Operation Phakisa is the government’s fast-track economic program, which includes unlocking potential in South Africa’s oceans.

Aside from the future risk of oil pollution if Shell finds viable volumes of hydrocarbons, the committee says that drilling the seabed could release other toxic substances into the marine environment.

“For over two decades” said Mbuthuma, “the coastal Amadiba community has fought against opencast mining on our land. Now we must also fight against mining of the ocean. Indigenous people along the whole coast of Africa must have the right to say no to projects that threaten their livelihoods, the right to free prior and informed consent.”

“We call upon the South African government to acknowledge the climate crisis,” Mbuthama added. “More and more expansion of the fossil fuel economy is not the solution to the economic crisis. You cannot bring about economic recovery by threatening our livelihoods and the ecology of the ocean… Put the lives of people before profits. Withdraw the license given to Shell for preparing mining in the ocean.”

According to Albi Modise, the director of communications at the Department of Forestry, Fisheries, and the Environment, Impact Africa, a subsidiary of Impact Oil & Gas, applied for exploration rights in 2013, under the Mineral and Petroleum Resources Development Act.

The permit was approved prior to December 8, 2014, which is when “the South African government agreed on the One Environmental System legislation—aligning the previously fragmented and often contradictory mining laws in the country,” Metro.co.uk reported. Shell acquired a 50% stake in Impact Africa’s surveying venture last November.

“Many believe Shell would have been denied this permission had the One Environmental System been in effect earlier,”  Metro.co.uk noted.

While new regulations would have required Shell to submit “an environmental management plan with its application” the news outlet added, the Department of Forestry, Fisheries, and the Environment has indicated that “South Africa’s permission for Shell will remain legally valid unless it is thrown out by a court.”