“Any amount of petroleum in our water is too much. 350 times the ‘safe limit’ is absolutely intolerable.” 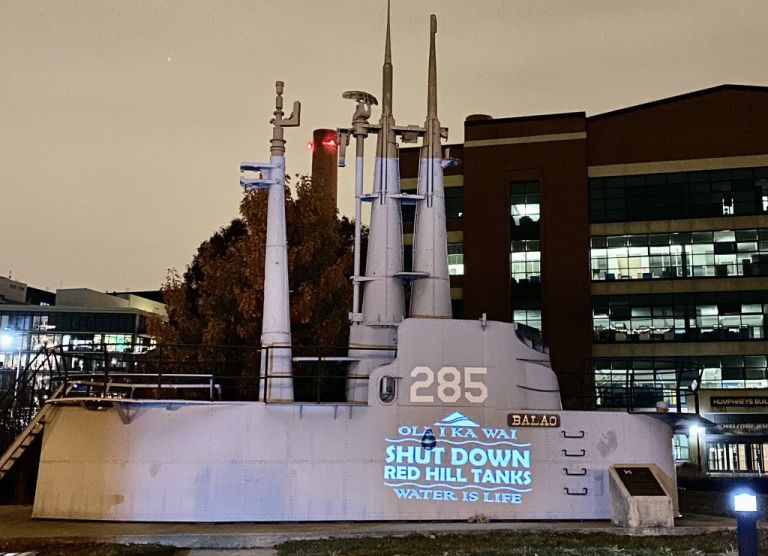 One of the messages displayed onto the USS Balao Conning Tower outside of the U.S. Navy Museum in Washington D.C. on December 12, 2021. (Photo: CodePink)

Activists with CodePink, in solidarity with Hawaii-based water protectors, on Friday projected images on a submarine tower outside the Navy museum in Washington, D.C., calling for a shutdown of a military fuel storage facility associated with contamination of Oahu drinking water.

In a Saturday statement, CodePink said that the “Navy’s failure to protect its sailors, their families, and the broader community is further justification of the need to demilitarize and decolonize Hawai’i and serves as a testament to the military’s prioritization of ‘business as usual’ over the health and wellbeing of the people.”

The action was welcomed by the Oʻahu Water Protectors coalition, which called it a “powerful demonstration of solidarity.”

“We may be separated by oceans,” the group tweeted, “but we are united in the same struggle to #DemilitarizeHawaii and all other peoples struggling under the yoke of U.S. imperialism.”

The projections in Washington, D.C. came amid sustained outrage and protests by groups including the Oʻahu Water Protectors over the Navy’s Red Hill fuel storage facility, which sits above a major Oʻahu aquifer. Warning signs of impacted water were evident for years with multiple leaks, and recent water samples showing petroleum contamination far above so-called safe limits driving heightened demands for action.

We are the O’ahu Water Protectors and we are here to say enough. You will no longer poison our people, our land, and our water. #ShutDownRedHill pic.twitter.com/WaYtN2Guog

Responding to the new data, the Oʻahu Water Protectors tweeted Friday: “Any amount of petroleum in our water is too much. 350 times the ‘safe limit’ is absolutely intolerable. Shut it down. U.S. Navy needs to remove themselves from the waters and the lands of Hawai‘i.”

The DOH ordered the Navy to drain the 20 storage tanks, but it has not committed to doing so, the Honolulu Star Advertiser reported.

“How dare they challenge the Director of Health’s emergency order, which has been issued to protect the health and safety and the environment for our community,” Ernie Lau, manager and chief engineer for the Honolulu Board of Water Supply, told the outlet.