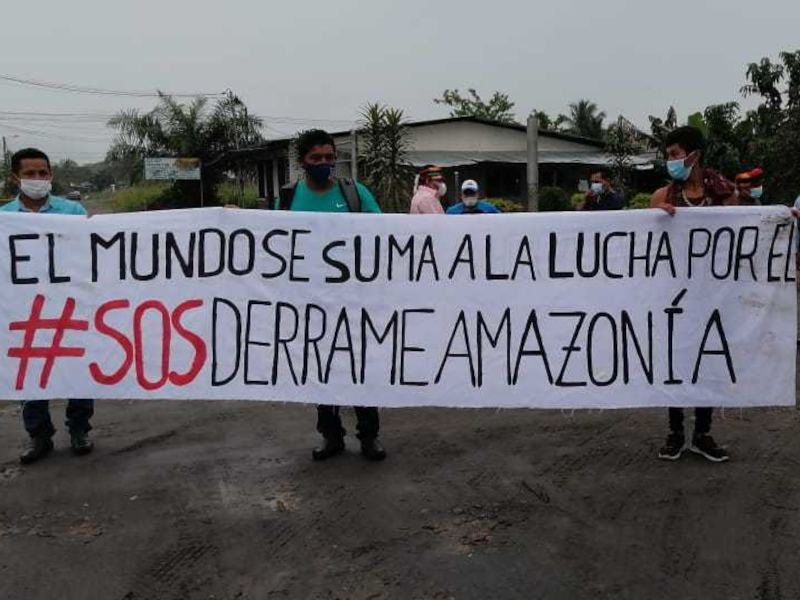 A pipeline constructed by OCP Ecuador burst on Friday after a rockslide, according to NBC News. Videos posted on social media by the Confederation of Indigenous Nationalities of Ecuador (CONAIE) and Amazon Frontlines showed oil spraying out of the pipeline into the rainforest.

🆘URGENT! New oil spill in Ecuador on the banks of the Coca river, in what appears to be a new rupture of the @OCPEcuador pipeline. Over 27,000 Kichwa living downriver still suffereing impacts of massive April 2020 oil spill. Government & courts did nothing. This is the result. pic.twitter.com/eTgwtO4kvv

OCP Ecuador claimed it had contained the spill so “it cannot contaminate any bodies of water,” but environmental defenders said the spill would be a “disaster” for more than 27,000 Indigenous Kichwa people living downriver from the spill on the banks of the Coca River.

More than 60,000 people depend on water from the river, according to NBC News.

“The river is contaminated. Look,” said a campaigner in a video posted by Amazon Frontlines, showing oil flowing into the Coca River. “Thousands of liters are being spilled into the river. Thousands and thousands.”

The group said OCP Ecuador “lied and knowingly endangered Kichwa communities” when it said in an official statement Saturday that the burst pipeline was not “directly exposed to rivers” and that the oil flow had been controlled.

“These are the lies that put lives at risk,” said Amazon Frontlines. “We must end the impunity!”

The ruptured pipeline has caused the second major oil spill in the Ecuadorian Amazon in two years.

Indigenous communities are “still suffering impacts of massive April 2020 oil spill,” said Amazon Frontlines, noting that a lower court threw out a lawsuit filed by the Kichwa last year; the case is now pending before Ecuador’s Constitutional Court, with the plaintiffs demanding remediation of the oil spill.

“Spills have become a part of our daily life, and we live with the contamination for decades. The oil industry has only brought us death and destruction,” Andres Tapia of the Confederation of Indigenous Nationalities of the Ecuadorian Amazon told NBC News Sunday after the latest spill. “We are calling on the government to halt oil expansion plans and properly clean up this spill and all the others that continue to contaminate our territories and violate our rights.”

The pipeline that burst Friday pumps about 450,000 barrels of crude oil per day.

About two-thirds of the oil extracted from the Amazon rainforest is exported to the United States, and Ecuadorian President Guillermo Lasso has called for doubling the country’s oil production since taking office last year.