“This is an unprecedented atrocity, for which there is no and cannot be any justification,” said nearly 200 officials from cities across Russia. 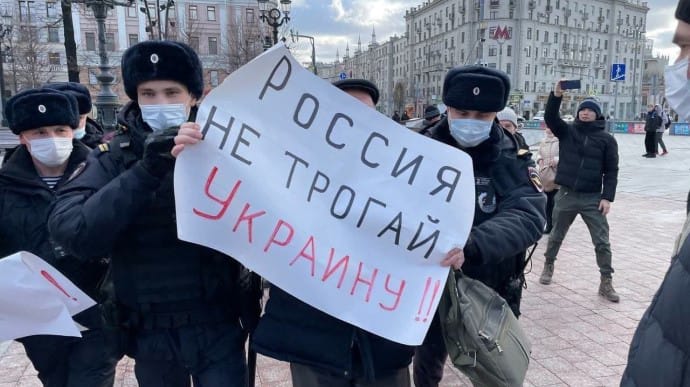 Critics of Russian President Vladimir Putin’s long-awaited invasion of Ukraine on Thursday joined open letters and took to Russia’s streets to protest the ongoing air and ground assault—resulting in more than 1,000 arrests.

The protests within and beyond Russia came as Moscow claimed Russian strikes took out at least “74 ground facilities of Ukraine’s military infrastructure.”

“Nothing good will come out of this,” a 36-year-old computer programmer, Dmitry, told The Moscow Times in the Russian capital. “We don’t need war, we need to be able to come to agreements.”

These courageous Russian anti-war protesters are being arrested and persecuted now, but history will vindicate them and damn the regime that’s locking them up. https://t.co/DcoGudtPKm

One reassuring sign is that no clear support for war is discernible in Russian society. According to the Levada Center, the last independent polling agency (itself branded a “foreign agent” by the Russian government), 40% of Russians do not support the official recognition of the Donetsk and Luhansk “people’s republics” by the Russian authorities, while 45% of Russians do.

“While some signs of ‘rallying around the flag’ are inevitable,” the pair added, “it is remarkable that despite complete control over major media sources and a dramatic outpouring of propagandistic demagoguery on TV, the Kremlin is unable to foment enthusiasm for war.”

Look at the size of anti-war protestors in St Petersburg, Russia. Wow pic.twitter.com/dHg9Uwt9RQ

People marching through central Moscow this evening chanting “No to War!” pic.twitter.com/BTQ3ZOGTan

The Times reported that “solo pickets—essentially the only legal form of public protest in Russia—in protest of the war have taken place from the southern city of Tolyatti to the Far East city of Khabarovsk.”

The independent monitoring group OVD-Info tweeted Thursday that as of 11:30 pm in Moscow, at least 1,705 people had been detained across dozens of Russian cities.

Footage of protests and resulting arrests in Russia circulated on social media:

An anti-war protest today in Novosibirsk. Such rallies don’t look like much (in practical terms, they aren’t much), but the demonstrators risk prison by walking outside and chanting these words. (“No to war!”) https://t.co/MoP8tIybDX

Sharing a video of police in the Russian capital, Emma Burrows of the U.K.’s ITV News tweeted that “there is such a sense of horror and heartbreak in Moscow tonight.”

One protester, almost crying, told me she is totally against war, condemns Putin and is afraid for the future of Russia. Putin has dragged Russia into a war that 99% of people I’ve spoken to today don’t want. There is such a sense of horror and heartbreak in Moscow tonight.

Andrew Roth, Moscow correspondent for The Guardian, posted photos of one person who wrote “No to war” on his jacket and another who held up a sign that said “Fuck war”—as well as video of the second man being arrested for the display.

He was detained within second of holding up that sign. Arrests are getting a lot rougher. pic.twitter.com/UtaaZHKekT

The Telegraph‘s Moscow correspondent, Nataliya Vasilyeva, similarly said that police there were snatching people on the streets who chanted “No to war.”

Scattered groups of protesters. Several hundred now. Police snatch out those chanting “No to war” pic.twitter.com/02foxCYHj6

Vasilyeva reported on some arrests and protests Wednesday, not long before the Russian invasion of Ukraine. At least six people were detained for a demonstration in Moscow’s Pushkinskaya Square Wednesday afternoon—including Grigory Sheyanov, a 45-year-old pediatrician.

“I’m against Russia’s militarist stance. I came out for peace,” Sheyanov told The Telegraph. “What’s happening now is a preparation for a big war.”

Putin announced the military assault of Ukraine early Thursday, after recognizing the self-declared People’s Republics of Donetsk (DPR) and Luhansk (LPR) following years of conflict between pro-Russia separatists and Ukrainian forces in those territories.

The Russian arm of the youth-led climate movement Fridays for Future made clear in a series of tweets Thursday that “we, FFF Russia activists, oppose any military conflicts.”

We express our solidarity and support to our friends from Fridays For Future Ukraine, and now we are trying to provide them with all possible assistance.

“We don’t want to be associated with blood and death because we never wanted that for us and our friends. The actions of our government are not our actions,” said the group. “Fridays for Future Russia has always opposed, is, and will continue to oppose any military action, no matter how ‘fair’ they are portrayed by state propaganda. War is not fair.”

We will continue to fight for peace and justice for all the inhabitants of the planet, especially in the current conditions.

The Moscow Times pointed out that public figures such as Russian celebrities and reporters also voiced opposition to the war—including over 150 Russian scientists and scientific journalists who signed an open letter against Putin’s “unfair and frankly meaningless” military action.

“By unleashing the war, Russia has condemned itself to international isolation and the position of a rogue state,” the letter says, warning that “Russia’s isolation from the world means the further cultural and technological degradation of our country.”

Over a 100 of #Russia local MPs have publicly voice their protest to war.
“We, the deputies elected by the people, unreservedly condemn the attack of the Russian army on #Ukraine ” #НетВойне https://t.co/cAqojVx1Ij

Nearly 200 officials from Russian cities signed on to another open letter that states, “We, the deputies elected by the people, unreservedly condemn the attack of the Russian army on Ukraine.”

“This is an unprecedented atrocity, for which there is no and cannot be any justification,” the municipal deputies’ letter adds. “Hopes for a good life in Russia are crumbling before our eyes.”

Novaya Gazeta editor-in-chief and 2021 Nobel Peace Prize winner Dmitry Muratov highlighted what many viewed as Putin’s thinly veiled nuclear threat directed at members of the North Atlantic Treaty Organization (NATO) or any other nations that may try to intervene.

Many awful things in Putin’s early morning address just now but this stood out, sounded like a tacit threat of nuclear war. https://t.co/vwDwi76AHQ

“The commander-in-chief spins the ‘nuclear button’ in his hands like a keychain from an expensive car,” said Muratov. “Is the next step a nuclear salvo?”

“I cannot interpret Vladimir Putin’s words about a retaliatory weapon in any other way,” he said. “Only the anti-war movement of Russians can save life on this planet.”