“Restricting discussion of queer people and erasing our identity within public schools will only exacerbate the pre-existing issues that LGBTQ+ youth face,” said one student protest organizer. 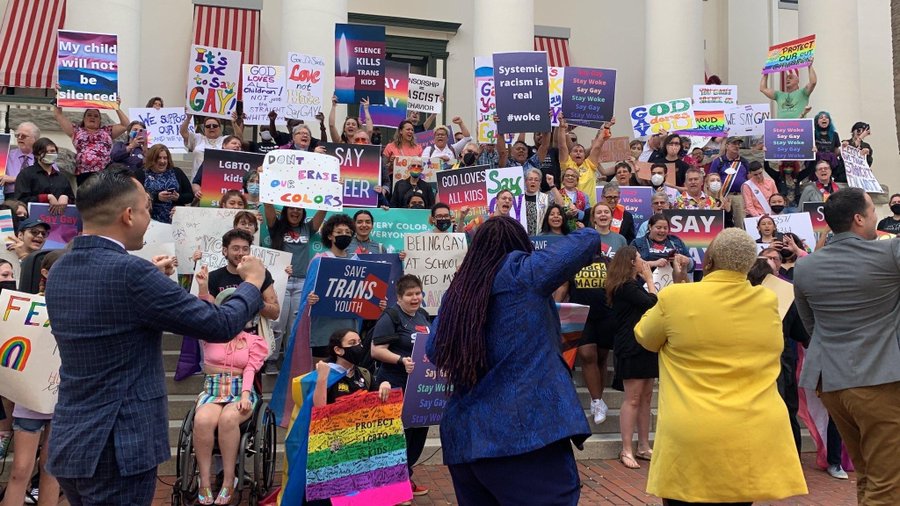 Students and their supporters rallied at the Florida state Capitol in Tallahassee on March 7, 2022 as the state Senate began debating a so-called “Don’t Say Gay” bill. (Photo: MoveOn/Twitter)

Students, teachers, and supporters from across Florida flocked to the state Capitol in Tallahassee on Monday ahead of a state Senate debate of the so-called “Don’t Say Gay” bill opponents say will have “devastating consequences” for LGBTQ+ youth.

As students and supporters chanted “we say gay” in downtown Miami before boarding buses Sunday night for the eight-hour trip to the state capital, Miami-Dade Mayor Daniella Levine Cava told WSVN that “it’s shameful what’s going on in Tallahassee.”

“So many ways that they are trying to take away our rights, our human rights,” added Cava, “and these young people are getting on a bus and riding all night to tell them, ‘Enough is enough.'”

Outside the Capitol on Monday, student protester Maggie Zheng told an Orlando Sentinel reporter that “America stands for freedom, at least it’s supposed to.”

“This doesn’t feel free to me,” Zheng said of the bill. “They are making laws against who we are.”

Rio Pollock and Maggie Zheng are among students protesting Florida’s so-called “Don’t Say Gay” bill today at the Capitol. “America stands for freedom, at least it’s supposed to,” Zheng said. “This doesn’t feel free to me. … They are making laws against who we are.” pic.twitter.com/z8kvy06RmS

Dwayne Shepherd—a teacher and gay-straight alliance club sponsor at Pinellas Middle School in Pinellas Park—held up a sign one of his transgender students made for the trip that read, “It’s okay to say gay!”

“They want to be treated fairly, and they want to feel safe,” he added. “And they will not feel safe if this bill passes.”

This morning, students rallied at the Florida Capitol demanding that their Senators vote against the horrifying “Don’t Say Gay” bill.

There is no time to waste.

Reply to this tweet with #LetFreeFloridaSayGay to show Florida Republicans that we won’t give up on LGBTQ+ youth. pic.twitter.com/iHi8a9ZTfU

As Common Dreams reported last month, H.B. 1557 and its companion, S.B. 1834, would effectively ban teachers from discussing sexual orientation and gender identity in elementary school or at any level “that is not age-appropriate,” an undefined term. The measure would also allow parents to sue schools who fail to adhere to the bill’s nebulous terms.

The bill passed the GOP-controlled state House last month by a vote of 69-47, with seven Republicans joining Democrats in voting against the measure. There are 24 Republicans and 15 Democrats in the state Senate, which is expected to vote on the bill this week.

The advocacy group MoveOn said Monday that “this bill is a gross attempt to erase, stigmatize, and marginalize the LGBTQ+ community.”

CALL YOUR SENATOR AND TELL THEM TO VOTE NO: https://t.co/J4O1UZ7WbJ pic.twitter.com/5upLvY7erK

The bill is supported by Republican Gov. Ron DeSantis, whose press secretary, Christina Pushaw, last week in a tweet suggested that anyone who opposes the measure is a pedophile or a supporter of pedophilia.

Smith (D-49) told protesters outside the Capitol building Monday that “we will get up, stand up, wake up every single day to fight for you because your lives matter.”

“While those senators walk onto the Senate floor, they need to look you in the eye first and see your humanity before they vote on this bill,” Smith added.

As students staged a sit-in inside the Capitol, one organizer read the names of LGBTQ youth who took their own lives after suffering bigotry and hatred.

As students stage a sit-in inside the Capitol building, the group goes quiet while youth organizer Madelyn reads the names of LGBTQ people who have died by suicide after experiencing anti-LGBTQ hate. pic.twitter.com/4IXmFz6JN4

In addition to the Tallahassee protest, many hundreds of students in Winter Park reprised last week’s statewide classroom walkouts over the bill.

In a Sunday letter to DeSantis requesting a meeting with the governor, Petocz wrote that “this legislation is damaging to LGBTQ+ youth across Florida.”

“Restricting discussion of queer people and erasing our identity within public schools will only exacerbate the pre-existing issues that LGBTQ+ youth face, whether that be poverty, homelessness, or mental health,” he continued.

“Students should be able to unapologetically express their individuality and identity without fear of their elected leaders seeking to minimize our existence,” Petocz added.