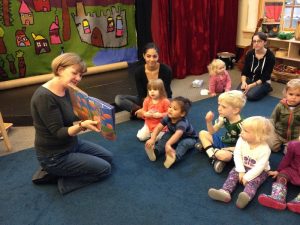 That’s according to a report published Monday by the Century Foundation (TCF) and Center for Economic and Policy Research (CEPR) as the Build Back Better (BBB) package remains stalled in the evenly split Senate due to Republicans and a few right-wing Democrats.

“The pandemic has only highlighted a decades-old issue: The United States does not have a childcare and early education system,” said report co-author Julie Kashen in a statement. “Families are struggling to meet the high cost of care, while facing rising costs of other necessities, and it’s harder than ever to find quality care when and where they need it.”

“Families have mostly been piecemealing it,” the TCF senior fellow and director of women’s economic justice told the Politico newsletter “Morning Shift.” She noted that “more than half of all families live in childcare deserts where there just isn’t enough licensed childcare for every child.”

“This isn’t just a problem for families—it’s holding businesses and our economy back,” Kashen added in her statement. “Our study shows that federal investments in childcare and pre-K are a win-win-win. It’s arguably the single most important thing we can do for families emerging from the pandemic and returning to work.”

The BBB proposals, as the study highlights, “would lower childcare costs for nine out of 10 families with young children in the United States while improving the quality of the early education they receive, raising wages of poorly compensated childcare workers, and covering the costs associated with higher quality care.”

“Universal preschool for 3- and 4-year-olds will finally be available, and parents will have the choice to find the right program for their family in center-based, home-based, family-based, school-based, and Head Start programs,” the report continues. “The programs build on federal-state partnerships, setting federal parameters while providing states with funding and flexibility to build the early childhood education system that families have long needed.”

The analysis shows that BBB’s policies would provide:

Lack of affordable, reliable childcare reduces the hours that parents—particularly mothers—are able to work, and can even push them out of the U.S. labor force entirely, the report explains.

“This in turn causes interruptions to job and career advancement, including lost promotions and raises, lost opportunities to build new skills and expertise, and contributes to the motherhood earnings penalty,” the study states. “Over the lifecourse, it means lower retirement savings and higher poverty rates for mothers than for fathers as they age.”

“Due to the intersecting impact of interpersonal discrimination and other forms of racism, Black and Latina mothers have faced even more acute challenges than their white counterparts,” the analysis adds, “as have working-class mothers of all ethnicities and races when compared to upper-middle-class and higher-income mothers.”

The study suggests that the BBB policies “could lead to roughly three million more parents—mostly mothers—entering the labor force or increasing their work hours nationally (about 1.1 million due to new entries and two million due to increased hours).”

The researchers calculated benefits across all 50 U.S. states and found:

On a state-by-state basis, the estimated earnings increase among parents entering the workforce or increasing work hours ranges from around $70 million a year in Vermont and Wyoming to $1.8 billion in Illinois, $1.7 billion in Pennsylvania, $1.8 billion in New Jersey, and more than $2 billion in states with higher populations such as California ($6.7 billion), Florida ($2.4 billion), New York ($3.1 billion), and Texas ($4.5 billion). These income benefits would have a ripple effect, raising additional tax revenue and encouraging new spending in local economies.

While focusing on the policies’ shorter-term benefits to families, the economy, employers, and state governments, the report emphasizes that “it is crucial to acknowledge that there are additional longer-term economic benefits for the children and communities impacted.”

The childcare and universal pre-K proposals “will support children’s healthy development, family economic security, and gender and racial equity,” the study declares, concluding that “they are also essential to helping state economies grow and prosper.”

The analysis was released the day before Kashen is set to testify on such policies before the U.S. Senate Committee on Health, Education, Labor, and Pensions (HELP).

Tune in tomorrow at 10am as TCF director of women’s economic justice @JulieKashen testifies before @HELPCmteDems @GOPHELP on the economic benefits that federal investments to #SolveChildCare would have! https://t.co/6L0rbDlFCF

Though Republicans and Democratic Sens. Joe Manchin (W.Va.) and Kyrsten Sinema (Ariz.) oppose the House-approved BBB bill, progressives are calling on Senate Democrats to keep working to pass a bold package before this year’s midterm elections.

Over 120 advocacy groups wrote in a recent letter to Senate Majority Leader Chuck Schumer (D-N.Y.) that “now is the moment to do everything in your power to ensure that we get the best, most inclusive reconciliation bill possible across the finish line.”