“We’ve choked this planet with plastic, from the highest mountains to the deepest oceans—and we’ve no idea at all about costs for public health,” said a British lawmaker. 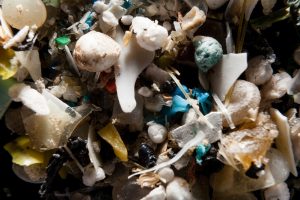 Microplastics from the Patapsco River are pictured at the laboratory of Dr. Lance Yonkos in the Department of Environmental Science & Technology at the University of Maryland in College Park, Md., on Feb. 6, 2015. Photo: Chesapeake Bay Program/flickr/CC

A team of toxicologists found microplastics in nearly 80% of the healthy adult blood samples it analyzed, marking the first time that tiny polymer fragments—measuring less than 5mm in size—have been detected in human blood, The Guardian reported Thursday.

Using techniques that allowed them to detect particles as small as 0.0007mm, the scientists, whose research was published in the peer-reviewed journal Environment International, examined blood samples provided by 22 anonymous donors in good health and discovered microplastics in 17 of them.

“Our study is the first indication that we have polymer particles in our blood—​it’s a breakthrough result,” Dick Vethaak, an ecotoxicologist at Vrije Universiteit Amsterdam in the Netherlands and expert on the health risks posed by microplastics, told the British newspaper. “But we have to extend the research and increase the sample sizes, the number of polymers assessed, etc.,” he said, noting that additional studies are in progress.

“It is certainly reasonable to be concerned,” Vethaak continued. “The particles are there and are transported throughout the body.”

The Guardian reported that as they travel through the body, microplastics “may lodge in organs,” though “the impact on health is as yet unknown.” Nevertheless, “researchers are concerned as microplastics cause damage to human cells in the laboratory and air pollution particles are already known to enter the body and cause millions of early deaths a year.”

Global plastic pollution—recently characterized as a life-threatening crisis by the Environmental Investigation Agency, a United Kingdom-based nonprofit—is so pervasive that minuscule polymer particles now contaminate every corner of planet Earth, from the tallest mountain peaks to the deepest parts of the ocean and the most remote islands.

We’e choked this planet with plastic, from highest mountains to deepest oceans – and we’ve no idea at all about costs for #publichealth.

We need to end all unnecessary single use – nearly all on high streethttps://t.co/TieX8Rma7V

It has already been established that people ingest microplastics while eating, drinking, and breathing, as scientists have discovered the tiny particles in human feces. A study published last year found that the poop of infants—many of whom are frequently fed with plastic bottles that increase their exposure to toxins—contained microplastics at a concentration 10 times higher than adults.

In general, “babies and young children are more vulnerable to chemical and particle exposure,” Vethaak confirmed on Thursday. “That worries me a lot.”

The amount and type of microplastics found in the blood samples varied widely, said Vethaak, who suggested that such results could be a reflection of the different types of everyday products that test subjects used before donating blood.

“This is a pioneering study,” he added, calling for swift follow-up research.

“The big question is what is happening in our body?” Vethaak said. “Are the particles retained in the body? Are they transported to certain organs, such as getting past the blood-brain barrier? And are these levels sufficiently high to trigger disease? We urgently need to fund further research so we can find out.”

The United Nations warned last year that plastic pollution in the world’s waterways is projected to more than double this decade and nearly triple by 2040 if governments fail to prevent fossil fuel and petrochemical companies from expanding the production of single-use plastics, which they have plans to do even though it would exacerbate the climate emergency and biodiversity destruction.

At the conclusion of the U.N. Environment Assembly earlier this month, 175 nations agreed to develop a legally binding global treaty to curb plastic pollution, though they will have to contend with the United States and the U.K.—the world’s biggest per-capita plastic polluters and opponents of previous deals.

Last summer, a Greenpeace investigation revealed that the Biden administration was still allowing Karissa Kovner, a senior policy advisor at the U.S. Environmental Protection Agency, to lead the agency’s work on chemicals even though, under former President Donald Trump, she appeared to side with oil and chemical industry giants eager to undermine the Swiss government’s push to restrict the production of a certain microplastic.