“While humans are killing humans, and governments are spending on weaponry as if there is no tomorrow, the environment is collapsing.” 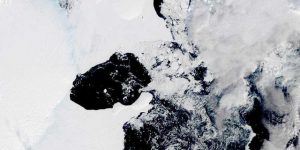 “While humans are killing humans, and governments are spending on weaponry as if there is no tomorrow, the environment is collapsing—so that there will be no tomorrow,” said former Greek finance minister and Progressive International co-founder Yanis Varoufakis.

The collapse, as The Guardian and CNET reported Thursday, occurred around March 15.

During that week, an unprecedented heat wave hit the region, with parts of East Antarctica seeing temperatures 40 degrees Celsius above normal. Scientists attributed the “freakish” warming to an atmospheric river.

The outlets pointed to a tweet with satellite imagery shared by Catherine Walker, an Earth and planetary scientist at the Woods Hole Oceanographic Institute and NASA.

Stef Lhermitte of the Delft University of Technology in the Netherlands on Friday shared time-lapse video of the change:

The complete collapse of the Conger Ice Shelf in recent days is the end of a long-term multi-decadal demise of the ice shelf. The image below shows its extent in 1973 (red line), where it joined with the Shackleton Ice Shelf. Most of the loss took place from 1973-2000 (blue line) pic.twitter.com/Y11LP6N4qJ

Ice shelves, as NASA describes, are “floating tongues of glaciers that extend over the ocean” and “slow the rate at which Antarctica’s glaciers contribute to global sea level rise” by holding back the flow of ice into the sea.

At roughly 1,200 square kilometers, according to the reporting, the Conger Ice Shelf was about the size of Los Angeles.

“This ice shelf may have been small but it is in EAST Antarctica, a region previously considered less vulnerable,” he said. “It’s a wake-up call.”

In a Twitter thread responding to the new reporting, Guardian columnist and climate activist George Monbiot pointed to a need for “systemic” changes to address the climate crisis and asked, “How many more warnings do we need that we are facing the prospect of a cascading regime shift?”

“The shift will push planetary conditions into a new state,” he continued. “This state will be hostile to the species that thrived in the old one. Species like us.”

Monbiot further lamented that climate-related changes remain “at the bottom of the agenda” and asserted that “in retrospect, if there is a retrospect, we’ll see the current phase of our slide towards disaster as the least comprehensible of all.”

“We knew what was happening. The writing was on the wall,” he added. “Yet we carried on opening new oil fields, driving SUVs, leaving homes uninsulated.”