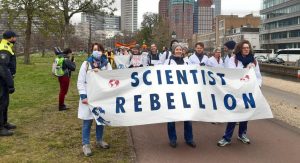 The landmark report on mitigation by Working Group III of the Intergovernmental Panel on Climate Change (IPCC)—part of the U.N.’s sixth comprehensive climate assessment since 1992 and possibly the last to be published with enough time to avert the most catastrophic consequences of the planetary crisis—was compiled by 278 researchers from 65 countries.

The authors, who synthesized thousands of peer-reviewed studies published in the past several years, make clear over the course of nearly 3,000 pages that “without immediate and deep emissions reductions across all sectors, limiting global warming to 1.5°C is beyond reach.”

Meanwhile, a 64-page Summary for Policymakers (SPM) of the report—a key reference point for governments—required the approval of all 195 member states of the IPCC and was edited with their input.

Following a contentious weekend of negotiations in which wealthy governments attempted to weaken statements about green financing for low-income nations and fossil fuel-producing countries objected to unequivocal language about the need to quickly eliminate coal, oil, and gas extraction, the IPCC document was published several hours later than expected on Monday.

“Despite the escalating climate emergency and the total absence of emissions cuts, the framing of the final version of the SPM is still alarmingly reserved, docile, and conservative,” Scientist Rebellion, an international alliance of academics who are advocating for systemic political and economic changes in line with scientific findings, said Tuesday in a statement.

“The science has never been clearer: to have any chance of retaining a habitable planet, greenhouse gas emissions must be cut radically now,” the group continued. “Limiting warming to 1.5°C and responding to the climate emergency requires an immediate transformation across all sectors and strata of society, a mobilization of historic proportions: a climate revolution.”

“The IPCC [has] avoided naming the major culprits for 30 years, which is one reason for the absence of real emissions cuts,” the group added. “Facts detailing the complicity of the world’s richest countries in fueling the climate crisis have been watered down by the IPCC’s political review process.”

Scientist Rebellion proceeded to contrast the final version of the SPM—”the document that garners almost all attention”—to an early draft of a summary of the Working Group III report on mitigation that IPCC authors associated with the group leaked last August out of concern that their conclusions would be diluted by policymakers.

Peter Kalmus, a Los Angeles-based climate scientist and author who is participating in this week’s direct actions, told Common Dreams that the shortcomings of governments and policymakers have driven him to act.

Kalmus said he was willing to engage in civil disobedience and risk arrest this week, “because I’ve tried everything else I can think of over the past decade and nothing has worked. I see humanity heading directly toward climate disaster.”

With humanity “currently on track to lose everything we love,” he said, the scientific community must intensify its efforts.

“If we don’t rapidly end the fossil fuel industry and begin acting like Earth breakdown is an emergency, we risk civilizational collapse and potentially the death of billions, not to mention the loss of major critical ecosystems around the world,” said Kalmus. “This is so much bigger than me. Expect climate scientists to be taking such actions repeatedly in the future and in large numbers.”

On Wednesday, direct actions by scientists took place in Berlin, Germany; The Hague, Netherlands; Bogata, Colombia, and other cities.

About a dozen members of the group “Scientist Rebellion” in Berlin have glued themselves to a bridge leading to the German parliament and chancellery to demand more action to tackle climate change. pic.twitter.com/NqbEgANhul

In its Tuesday assessment, Scientist Rebellion documented how the political review process weakened or eliminated language about carbon inequality and the need for far-reaching socio-economic transformation to slash greenhouse gas (GHG) pollution in the final SPM:

Example 1: Section B6 of the report originally stated that “institutional inertia and a social bias towards the status quo are leading to a risk of locking in future GHG emissions that may be costly or difficult to abate.” This has been replaced with “global GHG emissions in 2030 associated with the implementation of nationally determined contributions… would make it likely that warming will exceed 1.5°C during the 21st century.” The final version also no longer mentions that “vested interests” and a focus on an “incremental rather than a systemic approach” are limiting factors to ambitious transformation.

Example 2: The leaked SPM stated that “within countries, inequalities increased for both income and GHG emissions between 1970 and 2016, with the top 1% accounting for 27% of income growth,” and that “top emitters dominate emissions in key sectors, for example the top 1% account for 50% of GHG emissions from aviation.” Neither statement appears in the final version.

“While the SPM—being approved line-by-line by all governments—is reserved, docile, and conservative, the situation is clear,” said Scientist Rebellion.

The group went on to quote U.N. Secretary-General António Guterres, who said Monday that “we are on a fast track to climate disaster.”

Limiting global heating to the boundaries set out under the Paris Agreement now requires an immediate shift into emergency mode, a transformation across all sectors and stratas of society, a mobilization of historic proportions — in short, a climate revolution. #ClimateCrisis 2/2 pic.twitter.com/wxvNBUee2q

As Common Dreams reported Monday, more than 1,000 scientists in at least 25 countries on every continent in the world are expected to participate in strikes, occupations, and other actions this week to highlight “the urgency and injustice of the climate and ecological crisis,” and several demonstrations are already underway.

Guterres, for his part, said Monday that “climate activists are sometimes depicted as dangerous radicals, but the truly dangerous radicals are the countries that are increasing the production of fossil fuels.”

For his part, Kalmus acknowledged it was going to take much more than a series of direct actions by scientists to turn the tide against inaction.

“We need a billion climate activists,” Kalmus said. “I encourage everyone to consider where we’re heading as a species, and to engage in civil disobedience and other actions. The time is now. We’ve waited far too long.”