“We’ve already waited too long to enact reforms that address this climate emergency,” said the co-executive director of the Center for Popular Democracy. “Our federal government must act now.” 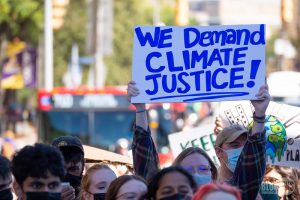 The Climate Strike and march in Pittsburgh on 9/24/21. Photo: Mark Dixon/flickr/CC

Over 20 advocacy organizations are planning a nationwide “Fight for Our Future” mobilization for Saturday to demand climate action from the Biden administration and Congress.

On the heels of Earth Day, demonstrators plan to gather in Washington, D.C., and communities across the United States to reiterate the necessity of pursuing bold policies to combat the fossil-fueled planetary emergency, citing the Intergovernmental Panel on Climate Change (IPCC) report released earlier this month.

The organizing comes not only in the midst of the climate emergency but also as Russia’s war on Ukraine and price gouging by fossil fuel giants—in the third year of the Covid-19 pandemic—drive up the cost of gas.

Sierra Club president Ramon Cruz in a statement that “in this unprecedented moment of climate crisis, rising prices, energy insecurity, and racial and environmental injustice, it’s vital that our leaders fight to establish a livable, just, and healthy planet for all.”

“The latest IPCC report made clear that we not only have an imperative to address the climate crisis, but also the means to do so—doing so just requires the political will to make transformational investments at the scale and speed the crisis demands,” he added. “There’s a clear path forward for critical investments in climate, care, jobs, and justice, and Congress must seize this crucial opportunity to truly ensure the future we all deserve.”

Excited to join thousands in front of the White House this weekend to call on @POTUS to use his bully pulpit and pass the climate bill through Congress! This is it. This is our chance. See you there! Saturday, 1pm est, Lafayette Park!https://t.co/apJEAJEM1k

The Build Back Better Act that would have delivered on some of President Joe Biden’s campaign pledges to boldly tackle the climate emergency passed the Democrat-controlled U.S. House of Representatives last year but stalled in the evenly split Senate due to objections from a few corporate Democrats, particularly Sen. Joe Manchin of West Virginia, whom critics call a “coal baron.”

Though that package has no apparent path to Biden’s desk, Politico reported earlier this month that “House progressives say they may be prepared to accept policies that boost fossil fuels in the short term in order to win Sen. Joe Manchin’s support for a party-line climate change and social spending bill to help salvage their agenda ahead of the midterm elections.”

“The reality is we don’t have the votes to do everything we want,” Rep. Donald McEachin (D-Va.), a member of the House Climate Crisis Committee, told the outlet. “So compromise is called for. Is it the compromise I would like? No. But we have a saying in the Virginia legislature. Every now and again you have to swallow a toad. And this is swallowing a toad.”

Manchin’s office declined to comment on any specifics but signaled to Politico a willingness to keep discussing potential climate policy.

“Momentum is at our backs right now,” said Service Employees International Union (SEIU) president Mary Kay Henry, whose group is among those behind the forthcoming protests. “Now is the best and potential final opportunity for Congress to take action on climate and create millions of good-paying union jobs across our care economy.”

“We simply cannot afford inaction: It’s time to make a real investment in making our nation safer, cleaner, healthier, and also more equitable and resilient,” she continued. “Caregivers and the people who depend on their services—young children, seniors, people with disabilities, and others—face grave danger in the event of life-threatening climate disasters. That’s why we’re joining with the ‘Fight for Our Future’ coalition to mobilize a massive nationwide coalition to call for action on climate and care.”

Here’s 2 ways to get involved:

1️⃣ Grab a sign, bring a water, and pull up to one of our almost 100 events around the US.

2️⃣ Plug into your community and host an action yourself! Our site includes everything you’ll need to get started!

Events are planned in dozens of cities, and “Biden administration officials will speak at the event in D.C., with confirmed attendance from White House deputy climate adviser Ali Zaidi and White House Council on Environmental Quality Chair Brenda Mallory,” according to The Washington Post.

“There have been so many discussions over the past year and a half, and the planet’s clock is running out,” Christy Goldfuss, senior vice president for energy and environment policy at the Center for American Progress, another group organizing the events, told the newspaper.

“After Memorial Day, it becomes all about politics and campaigns, and everyone is focused on their reelections,” she added. “So this is it. This is the last opportunity we’re going to have for years to get these priorities over the finish line.”

“We’ve already waited too long to enact reforms that address this climate emergency,” CPD co-executive director DaMareo Cooper stressed in a statement, “and the suffering endured by people living in every corner of the world proves the immediacy of this crisis.”

“The president and Congress must protect our planet and the people who call Earth home—now,” Cooper declared. “Heat is rising, storms are worsening, and vital resources increasingly flow to the powerful at the expense of poor, rural, Black, and Brown people. The irreversible impact of global warming is no longer theoretical.”