“These plans are designed to maximize profits for corporations, NOT to provide high-quality healthcare,” said Social Security Works. 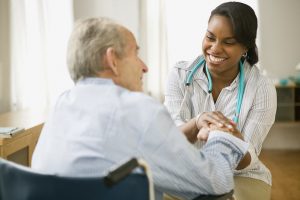 A government watchdog revealed Thursday that Medicare Advantage plans—which are offered by private companies but required to follow rules set by the government healthcare program—deny medically necessary care to tens of thousands of enrollees each year.

The revelation came in a report released by the U.S. Department of Health and Human Services Office of Inspector General (OIG), which examined a random sample of 250 prior authorization denials and 250 payment denials issued by 15 of the largest Medicare Advantage Organizations (MAOs) during the first week of June in 2019.

Government investigators found that 13% of the 12,273 prior authorization denials met Medicare coverage rules. “In other words,” the report explains, “these services likely would have been approved for these beneficiaries under original Medicare (also known as Medicare fee-for-service).”

These plans are designed to maximize profits for corporations, NOT to provide high quality health care.
https://t.co/JNLImMjQPS

Examples featured in the report include denying a follow-up MRI by claiming a patient’s lesion was too small as well as a request for a walker from a 76-year-old with post-polio syndrome.

The report points out that “for 3% of prior authorization denials, MAOs initially denied requests that met Medicare coverage rules, and later reversed these denials within three months and approved the requests.”

The investigators also found that 18% of the 160,378 reviewed payment denials “met Medicare coverage rules and MAO billing rules and should have been approved by the MAOs.”

“For an annual context, if these MAOs denied the same number of payment requests (28,949) in each of the other 51 weeks of 2019,” the report states, “they would have denied 1.5 million payment requests that met Medicare coverage rules and MAO billing rules that year. ”

Yep. And despite a directive that Medicare Advantage programs not be more restrictive in care provision than Medicare itself, this is routinely the case.

What would be an approved claim from a Medicare perspective often is denied by MedAdv. And all chalked up to “contracting.” https://t.co/nqr1vyqIPx

“For 6% of payment denials, MAOs initially denied payment requests that met Medicare coverage rules and MAO billing rules, and later reversed these denials within three months and paid the claims,” the document adds, acknowledging that some initial decisions were the result of system or manual errors.

While Medicare Advantage plans are intended to cover the same services as the federal program, MAOs receive a flat fee from the government per enrollee. The report notes that “to manage care for beneficiaries and to help control costs, MAOs may impose additional requirements, such as requiring that beneficiaries use only in-network providers for certain healthcare services; requiring prior authorization before certain services can be provided; or requiring referrals for specialty care services.”

“A central concern about capitated payment models—including the model used in Medicare Advantage—is the potential incentive for insurers to deny access to services and payment in an attempt to increase profits,” the document recognizes.

Based on the OIG’s findings from the probe, the report offers three primary recommendations to the Centers for Medicare and Medicaid Services (CMS):

According to the report, “CMS concurred with all three recommendations.”

Problems with MAOs impact millions of people, particularly seniors, as Medicare plans primarily serve those age 65 and older. Over 26 million Americans were enrolled in a Medicare Advantage plan last year—42% of Medicare beneficiaries—and the Congressional Budget Office projects that over half of all enrollees will opt for the private plans by 2030.

The federal watchdog’s review follows a letter last week led by U.S. Rep. Katie Porter (D-Calif.), which urged the Biden administration not to increase taxpayer funding for Medicare Advantage plans after another government report exposed $12 billion in overpayments in 2020.

Rather than provide medically-necessary care, Medicare Advantage plans often claim patients are sicker than they are to earn more profit. I’ve been calling for stronger accountability measures that will better protect patients and taxpayers.https://t.co/1UWBvB58jB

The OIG report also comes as some progressives in Congress have renewed a push for Medicare for All—and as they continue to criticize the Biden administration for its redesign of a Trump-era experiment that opponents have framed as an attempt to fully privatize Medicare.

Some critics noted the Direct Contracting program—now rebranded as ACO REACH, which stands for Accountable Care Organization Realizing Equity, Access, and Community Health—in their responses to the new report.

“It couldn’t be more clear that these problems are systemic and widespread in Medicare Advantage—that’s why this week I led a letter calling for dedicated funding to investigate inappropriate care denials and fraud by private insurers,” tweeted Rep. Pramila Jayapal (D-Wash.), chair of the Congressional Progressive Caucus.

“This is also a clear-cut argument for why we must immediately end Medicare privatization programs like ACO REACH,” Jayapal added. “There’s no excuse for allowing the same Medicare Advantage organizations to now administer ‘care’ for traditional Medicare beneficiaries.”