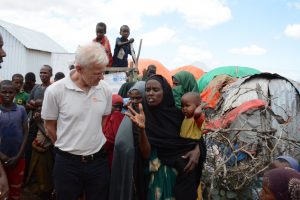 “Already 1.5 million children below the age of five are malnourished, and we expect that 356,000 of these may not survive through the end of September this year,” Adam Abdelmoula, the United Nations’ humanitarian coordinator for Somalia—which has suffered an unprecedented four consecutive failed rainy seasons—said during a visit to Dolow in the south near the Ethiopian border.

“Acute malnutrition is about to increase unless we scale up our response plan in a major way,” he added. “Some 7.1 million Somalis are in need of food assistance. If the fifth rainy season fails, this number will increase significantly.”

Hirsia Farag Abdi, an 80-year-old Somali woman from Harhaar, said in a video recently published on TikTok that “we don’t have strength and livestock anymore.”

“We had our animals—goats, camels, as well as a house,” she added. “All these have been destroyed by the drought… My only hope is my grandchildren and the few goats we have left.”

“If an intervention does not happen as expected, and quickly, we will inevitably witness the mass death of children in the coming months,” he said.

Referencing the 2010-2012 famine that killed more than a quarter of a million people in Somalia—half of them children under the age of five—Claire Sanford, deputy humanitarian director of the private charity Save the Children, told The Guardian:

I can honestly say in my 23 years of responding to humanitarian crisis, this is by far the worst I’ve seen, particularly in terms of the level of impact on children. The starvation that my colleagues and I witnessed in Somalia has escalated even faster than we feared.

We have genuinely failed as an international community that we have allowed the situation to get to the extent it is at the moment. In 2011, we vowed as a community that we would never, ever let this happen again. And yet we have failed in that promise.

Visiting Somalia, Jan Egeland, secretary-general of the Norwegian Refugee Council, tweeted he was “shocked by the devastating impact” of the drought, which he attributed largely to a “changing climate” the Somali people “did nothing to cause.”

Heartbreak of climate change in Central Somalia: Ibrahim walked 260km to Baidoa with the help of a donkey to save the life of acutely sick & malnourished Salado. She’s 3yrs old & weighs 6.4 kilo. “I left my wife and 7 children in our drought stricken village – who will help us?” pic.twitter.com/MQkxqBH6j0

In a letter to leaders of G7 nations ahead of a meeting this weekend in Germany, Michael Dunford, the United Nations World Food Program’s (WFP) regional director for East Africa, said children are starving to death “before our eyes,” and that only a “massive” funding and humanitarian effort can avert an even greater catastrophe.

“We need money, and we need it now,” he said. “Will we be able to avert [a famine in Somalia]? Unless there is… a massive scaling-up from right now, it won’t be possible, quite frankly.”

Last year, G7 leaders endorsed a Famine Prevention Compact, in which they pledged $7 billion to support anti-hunger efforts around the world. However, experts protested that not enough money was allocated to the Horn of Africa.

“We are facing hell on Earth if we do not respond immediately,” he added, citing “riots in Sri Lanka and protests in Tunisia, Pakistan, and Peru,” as well as “destabilization taking place in places like Burkina Faso, Mali, and Chad.”