“It’s absolutely insane that a prosecutor elected by the people of his county can just be suspended by a governor for not carrying out the governor’s pet projects of reaction,” said one critic. 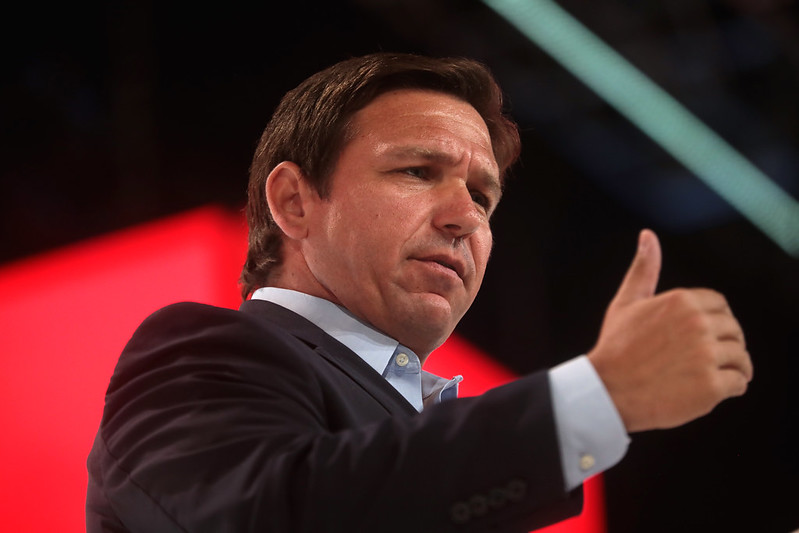 Republican Florida Gov. Ron DeSantis came under fire Thursday for suspending Andrew Warren over the state attorney’s pledges not to prosecute people for violating restrictions on abortion or gender-affirming care.

Citing the state constitution, DeSantis dismissed Warren for alleged “neglect of duty.” The governor’s suspension order references the ousted prosecutor’s support for a pair of joint statements from the national network Fair and Just Prosecution (FJP).

“We don’t elect people in one part of the state to have veto power over what the entire state decides on these important issues,” DeSantis said.

The Florida Supreme Court has ruled over and over that abortion is protected by the state’s constitution.

DeSantis—who has recently faced criticism for his attacks on abortion, LGBTQ+, protest, and voting rights—is up for reelection this year and widely expected to seek the GOP presidential nomination in 2024, which Warren noted in his statement blasting the suspension.

“Today’s political stunt is an illegal overreach that continues a dangerous pattern by Ron DeSantis of using his office to further his own political ambition,” said Warren. “It spits in the face of the voters of Hillsborough County who have twice elected me to serve them, not Ron DeSantis.”

County residents “have the right to elect their own leaders—not have them dictated by an aspiring presidential candidate who has shown time and again he feels accountable to no one,” Warren added. “Just because the governor violates your rights, it doesn’t mean they don’t exist.”

Today’s political stunt is an illegal overreach that continues a dangerous pattern by Ron DeSantis of using his office to further his own political ambition. It spits in the face of the voters of Hillsborough County who have twice elected me to serve *them*, not Ron DeSantis… pic.twitter.com/RzPXksSSWa

FJP executive director Miriam Krinsky called Warren’s suspension “an unprecedented and dangerous intrusion on the separation of powers and the will of the voters,” adding that “the independence of the prosecutor—and the autonomy to decide whom and what to charge with inherently limited resources—has been a hallmark of the American criminal legal system.”

While condemning DeSantis for his “outrageous overreach” and “blatant power grab,” Krinsky also made clear that the network stands with Warren, who she said “was elected and reelected because of his commitment to smart justice and public safety.”

Reporter Paul Blest also highlighted voter support for Warren as well as the lack of local support for DeSantis, who narrowly won the governorship in 2018 but lost Hillsborough County—which includes Tampa—by nine points.

One thing about Warren is that the people in Tampa wanted him in office a hell of a lot more than they wanted DeSantis pic.twitter.com/XeqdfNn8Tl

Florida-based writer and organizer Thomas Kennedy said that “Ron DeSantis continues his authoritarian crusade against anyone who opposes his assault on our rights by suspending Hillsborough State Attorney Andrew Warren, who recently said he would not prosecute people for not complying with Florida’s recently enacted abortion ban.”

In a move that critics warned would end Florida’s status as “an oasis of reproductive care in the South,” DeSantis signed the state’s 15-week abortion ban in April, about two months before the U.S. Supreme Court ended the right to abortion on a national level.

Ron DeSantis just accused prosecutor Andrew Warren of being “woke” and throwing a “hissy fit” when he refused to prosecute abortion cases. He’s suspended him.

DeSantis’ suspension order notes that Warren is the only state attorney in Florida who signed on to FJP’s statement that followed the high court’s decision, which said in part that enforcing abortion bans “will erode trust in the legal system, hinder our ability to hold perpetrators accountable, take resources away from the enforcement of serious crime, and inevitably lead to the retraumatization and criminalization of victims of sexual violence.”

Although, as DeSantis’ order highlights, the Florida Legislature has not passed laws prohibiting gender-affirming care or trans people from using facilities such as bathrooms that align with their identity, the state may soon ban certain healthcare for LGBTQ+ youth.

The Florida Board of Medicine is set to meet Friday to review a proposal by the state Department of Health—which is under Desantis’ control—to deny gender-affirming care to trans state residents under the age of 18.

Along with denouncing “DeSantis’ assault on transgender Floridians, Human Rights Campaign legal director Sarah Warbelow stressed Thursday that “science, medicine, and evidence-based approaches have demonstrated time and time again that transition-related care is medically necessary and lifesaving care, and if this proposal is adopted, it will go against the recommendation of every major medical association.”