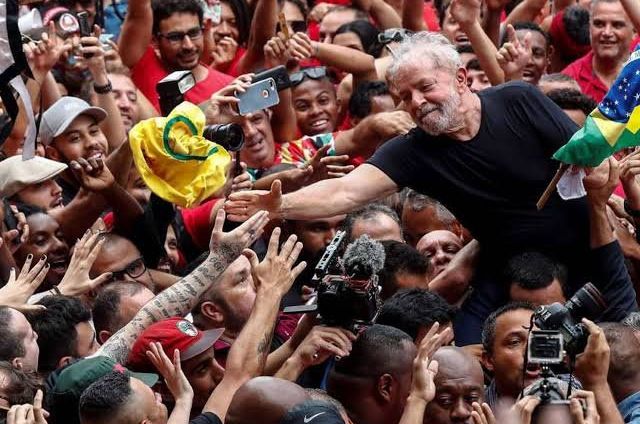 With 99% of votes counted via an electronic system that tallies final results in a matter of hours—and which was repeatedly aspersed by Bolsonaro in an effort to cast doubt on the election’s veracity—da Silva led the incumbent by more than two million ballots, or nearly two percentage points.

“Brazil is my cause, the people are my cause and fighting poverty is the reason why I will live until the end of my life,” da Silva said during his victory speech.

“As far as it depends on us, there will be no lack of love,” he vowed. “We will take great care of Brazil and the Brazilian people. We will live in a new time. Of peace, of love, and of hope. A time when the Brazilian people will once again have the right to dream. And the opportunities to realize what you dream.”

Da Silva, the 77-year-old co-founder of the left-wing Workers’ Party (PT), became the first challenger to defeat an incumbent president since the restoration of democracy in 1985. His campaign overcame rampant social media-driven disinformation campaign, political violence including the assassination of a PT congressional candidate, and what observers called massive Election Day voter suppression by federal police to win a third term for the man Brazilians endearingly call Lula.

Bolsonaro—who has threatened to reject the results if he lost—and his far-right nationalism will remain a powerful force in Brazilian politics despite his ouster. His tenure was marked by accelerated environmental destruction, especially of the Amazon rainforest; gross mishandling of the Covid-19 pandemic, which killed more people in Brazil than in any other country save the United States; disdain for the rights of Indigenous peoples; rampant bigotry; and incessant flirtation with authoritarianism.

“Bolsonaro lost, but Bolsonarism emerged victorious. The numbers don’t lie,” tweeted São Paulo state lawmaker Erica Malunguinho, a reference to the incumbent’s more than 58 million votes. “Our project must be political and pedagogical.”

There was utter silence from Bolsonaro and his campaign for hours after the race was called for da Silva. Journalist Marlos Ápyus tweeted, “‘Bolsonaro in silence.’ Let him go in silence. As for me, I’ll never hear his voice again.”

Brazilian and international progressives, as well as many of the nation’s poor, Indigenous, LGBTQ+, women, and people of color celebrated the imminent return of da Silva to the Palácio da Alvorada, which he occupied for two terms from 2003 to 2010.

“No more fear! With peace, love, and hope we will dream again,” tweeted Brazilian author Bianca Santana. “And we will work to live a full democracy where all people fit.”

Maria do Rosário, a PT member of the Chamber of Deputies—the lower house of Brazil’s National Congress—representing Rio Grande do Sul, exalted: “Today is the Day of Respect for Brazilian Women, it’s Workers’ Day, the Day of the Free Press and transparency. Today is Children’s Day and the fight against pedophilia; Day of the family and victims of Covid; Today is the day of courage and love. I hug you for that!”

U.S. Sen. Bernie Sanders (I-Vt.) tweeted that “today, the people of Brazil have voted for democracy, workers’ rights, and environmental sanity. I congratulate Lula on his hard-fought victory and look forward to a strong and prosperous relationship between the United States and Brazil.”

Sending love to the people of Brazil who ousted a right wing extremist destroying the planet and elected Lula, a union leader who will give us a shot at a livable future.

Thank you for making us feel hope.

University of California, Berkeley sociology professor Daniel Aldana Cohen said that “Lula’s narrow victory is still a massive win for Brazil: for its working class, its Black and Indigenous communities, and against fascism. It’s also a win for the Amazon and the planet itself—and thus [very] good news for the multiracial working class of the whole world.”

Da Silva is beloved by millions of Brazilians for his lifelong advocacy for the poor, workers, minorities, and rural and Indigenous people. As president, he lifted millions of Brazilians from poverty through sweeping social programs including Fome Zero (Zero Hunger) and Bolsa Familia (Family Allowance), while presiding over Brazil’s rise into the top tier of world economies. Former U.S. President Barack Obama called him the “most popular politician on Earth.”

However, da Silva’s focus on social uplift at the expense of the oligarchy earned him powerful enemies at home, and his solidarity with leftist Latin American leaders and opposition to U.S. imperialism made him a target of many in Washington and on Wall Street.

In 2017, da Silva was controversially convicted of corruption and money laundering in connection with the sweeping “Car Wash” scandal and spent 580 days behind bars before being freed when the Brazilian supreme court found his incarceration unlawful. Last year, the high court annulled several criminal convictions against da Silva, restoring his political rights and setting the stage for his 2022 run.

Da Silva’s win is the latest in a string of leftist victories in Latin America and represents a significant counterbalance to the resurgence of right-wing politics in other parts of the world.

“Congratulations brother Lula, president-elect of Brazil,” tweeted Bolivian President Luis Arce. “Your victory strengthens democracy and Latin American integration. We are sure that you will lead the Brazilian people along the path of peace, progress, and social justice.”