FTC Chair Lina Khan is “charting a path toward a new era of refined antitrust enforcement that prioritizes working families and small businesses,” said one advocate. 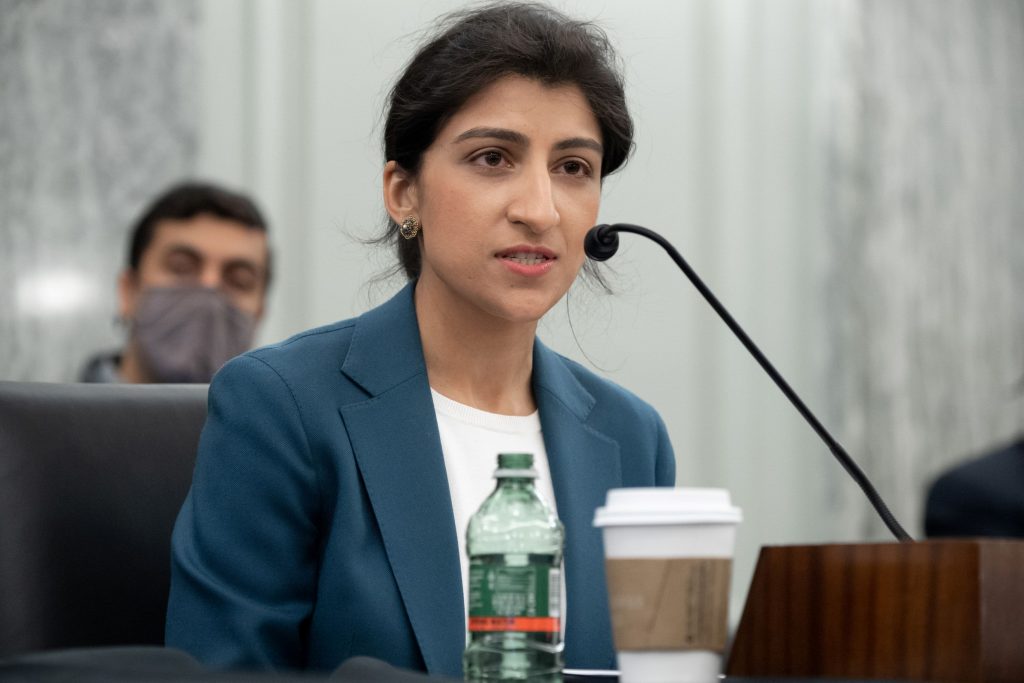 Progressives cheered Thursday after the Federal Trade Commission voted 3-1 to issue a new policy statement restoring the agency’s commitment to “rigorously enforcing the federal ban on unfair methods of competition.”

While Section 5 of the FTC Act—passed in the early 20th century by congressional lawmakers unsatisfied with the Sherman Act, the original antitrust statute—prohibits “unfair methods of competition” and instructs the commission to identify and rein in such practices, the agency has refused for decades to exercise its full legal authority to do so.

The statement approved Thursday by FTC Chair Lina Khan and Commissioners Rebecca Slaughter and Alvaro Bedoya revives the agency’s policy of doing everything in its power to prevent corporations from using anti-competitive tactics to gain advantages.

“When Congress created the FTC, it clearly commanded us to crack down on unfair methods of competition,” said Khan. “Enforcers have to use discretion, but that doesn’t give us the right to ignore a central part of our mandate. Today’s policy statement reactivates Section 5 and puts us on track to faithfully enforce the law as Congress designed.”

Section 5 of the FTC Act of 1914 originally charged the Federal Trade Commission with using its expertise to distinguish between “unfair” and “fair” methods of competition. As opposed to the Department of Justice Antitrust Division’s role, which is focused on enforcement of the law, the FTC was tasked by Congress to clarify and interpret the rules of the road for anti-competitive behavior.

However, beginning in the 1980s, antitrust enforcers strayed from this original mission, culminating in a 2015 policy statement where the commission announced it would not bring cases under Section 5 unless they met a much narrower framework. One of Chair Khan’s first actions as head of the FTC was to overturn this 2015 policy statement, with promises for additional policy statements in the future.

Sandeep Vaheesan, legal director of the Open Markets Institute, applauded the FTC for announcing “a clean break with 40 years of blatant disregard for the rule of law.”

“Since the early days of the Reagan administration, the FTC minimized or neglected its statutory obligation to identify and challenge unfair methods of competition by large corporations, no matter how damaging to our democracy and society,” said Vaheesan.

“Instead, commissioners warped the law to fit the framework of their preferred economic theories—theories never adopted in law by Congress,” Vaheesan noted. “Today, the three Democratic commissioners demonstrated that they understand that it was the American people—acting through Congress—who created the commission and vested it with broad competition powers, not a few Chicago School academics and advocates.”

“As a result, the FTC will have renewed authority to outlaw predatory pricing, unfair supplier rebates, and other abusive monopolistic tactics with sharp focus,” said Miller. “Chair Khan isn’t just realigning the agency with its congressional mandate after years of retreat, but charting a path toward a new era of refined antitrust enforcement that prioritizes working families and small businesses.”

According to Demand Progress Education Fund legal director Ginger Quintero-McCall, the need for rigorous antitrust enforcement is increasingly important given the growing influence of Big Tech on the nation’s economy and politics.

“Aggressive enforcement is necessary to meet the challenges of today’s economy, especially in the online space, where monopolistic companies like Amazon and Google have too long abused their market dominance harming small businesses, consumers, and the economy at large,” said Quintero-McCall.

“The FTC’s policy statement lays out, in detail, the robust power of [the] federal government to limit anti-competitive corporate behavior,” said Kent. “For too long, the FTC has adhered to self-imposed limits on the substantial authority granted by Congress to address unfair methods of competition.”

“The crucial set of policy principles put forth in the document highlight neglected U.S. Supreme Court precedents that were previously ignored by business-friendly commissions,” Kent added. “It’s a credit to Chairwoman Khan, Commissioners Slaughter and Bedoya, and staff for working to issue such an incisive and important legal interpretation.”