“Democrats must do whatever it takes to defeat Republican attacks on our earned Social Security benefits,” said one advocate. “That means raising the debt ceiling this year, before Republicans take control of the House.” 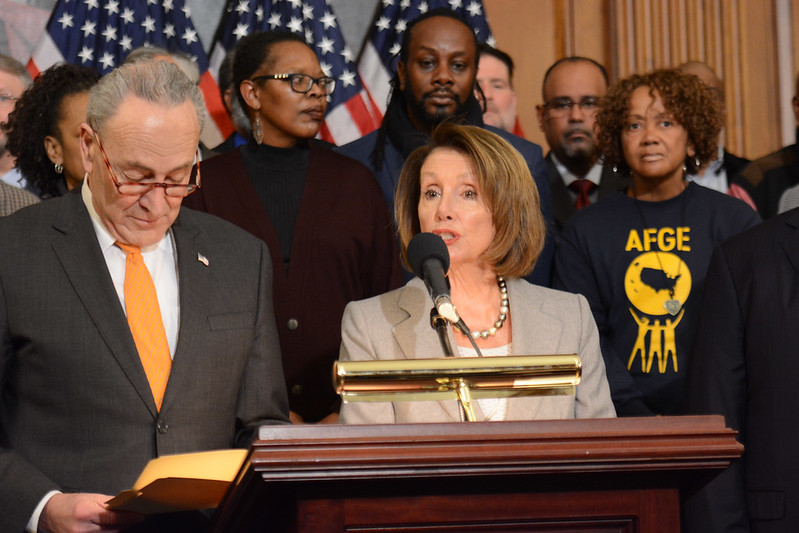 Progressives on Wednesday warned that time is running out for Democratic leaders to take Republicans at their word regarding slashes to social safety net programs, as U.S. Sen. John Thune indicated the GOP will use a potential fight over the debt ceiling next year as leverage to push cuts—unless the Democrats act now to raise the debt limit while they still control the Senate and House.

Thune (R-S.D.), who is the number-two Republican in the Senate as the chamber’s minority whip, told Bloomberg Tuesday that the party has a “long list” of policy priorities for the next Congress, which will commence on January 3. The party plans to put forward budget reforms including to federal programs which they have long claimed, erroneously, are unsustainable.

“There’s a set of solutions there that we really need to take on if we’re going to get serious about making these programs sustainable and getting this debt bomb at a manageable level before it’s too late,” Thune told a panel of Bloomberg journalists in Washington.

Thune’s comments came weeks after Rep. Kevin McCarthy (R-Calif.), who is expected to be named House speaker in the next Congress, told Punchbowl News that Republicans plan to “eliminate some waste” as lawmakers negotiate the debt limit next year, in comments widely seen as referring to Social Security and Medicare.

The programs have long been targets of Republicans, despite the fact that Social Security is fully funded through 2035 and is able to pay for 90% of benefits for the next 25 years, even without Congress acting to expand it.

A failure to ultimately raise the debt ceiling and defaulting on the government’s existing obligations including Medicare, Social Security, and tax refunds could trigger a global financial crisis.

Before the midterm elections, President Joe Biden and other Democrats discussed a number of proposals to head off the Republican Party’s exploitation of the debt ceiling next year, including a hike that would extend past the 2024 election. Lawmakers have also proposed legislation that would allow the Treasury Department to raise the debt limit and or repeal the federal limit on borrowing.

According to Bloomberg, those efforts have “fallen by the wayside” since the elections earlier this month.

Numerous polls have shown voters strongly oppose cuts to Medicare and Social Security. On Tuesday, a survey by progressive think tank Data for Progress showed that 83% of voters—including 77% of Republicans—would be upset by such austerity measures.

83% (!!) percent of likely voters said they would be “very” or “somewhat” upset if Republicans were to cut Social Security and Medicare.

“Seniors voted for Democrats in the midterms explicitly because of their promise to protect Social Security, now Democrats have to do that,” Lawson told Common Dreams. “We won’t accept any excuses of it being procedurally hard, or time being short. None of that matters.”

David Dayen, executive editor of The American Prospect, emphasized that Democrats can’t credibly claim to be unprepared for the urgent push to lift the debt ceiling in the lame-duck session, considering comments about Social Security and Medicare cuts made over the past year by McCarthy and Sens. Rick Scott (R-Fla.) and Ron Johnson (R-Wis.).

This is shocking, it’s coming out of nowhere except for the dozens of Republicans in power who said it during the election.
Unfortunately there’s just nothing Democrats can do, except put end the debt limit through reconciliation in the lame duck https://t.co/StXEosSJH1 https://t.co/xhocsEVeIp

Pam Keith, director of the Center for Employment Justice, warned House Speaker Nancy Pelosi (D-Calif.) that her party has “one shot to cut this crap off at the knees and change the debt limit ceiling laws.”

I told you so. @SpeakerPelosi you have ONE SHOT to cut this crap off at the knees and change the debt limit ceiling laws.

Please don’t squander it. Get it done. America is depending on YOU. https://t.co/O10rS3sIOs

Thune’s comments “make it clearer than ever that taking the global economy hostage to force cuts to Social Security is the unified position of the Republican Party in both the House and Senate,” said Lawson in a statement.

“Democrats can’t allow Republicans to force them into choosing between an economic catastrophe and cutting the American people’s hard-earned Social Security benefits,” he added.