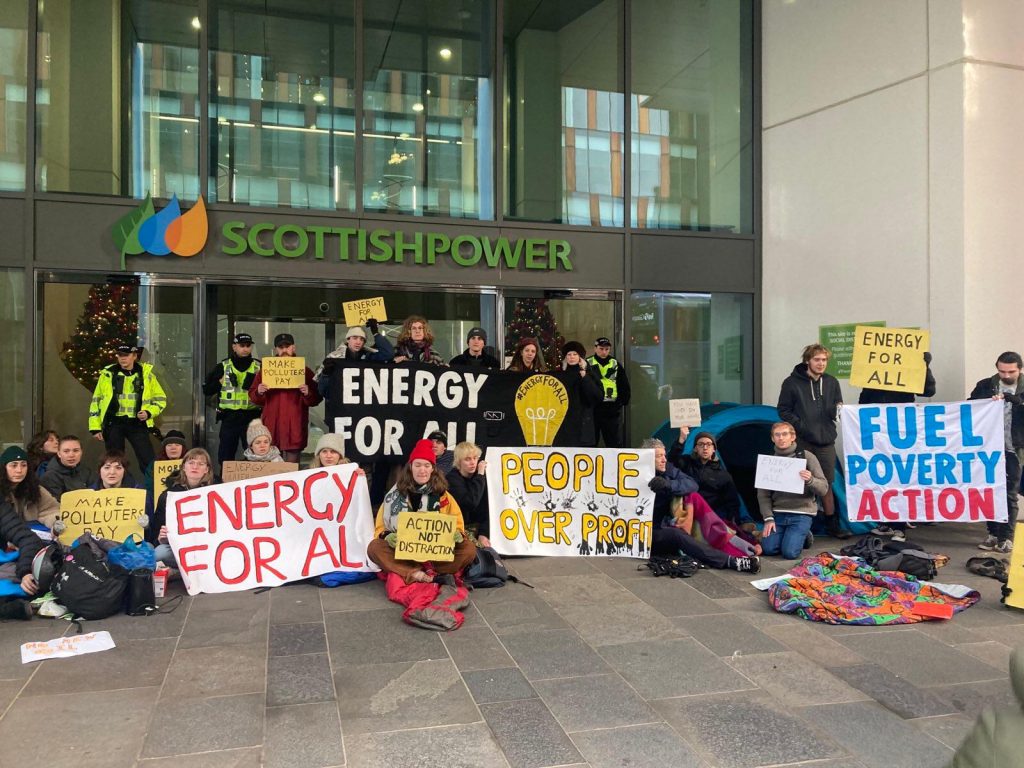 Demonstrators drew attention to the worsening crisis of fuel poverty and called on lawmakers to pick up more of the tab for skyrocketing bills, fund home insulation, and accelerate clean energy production—all of which would be made easier by enacting a stronger tax on oil and gas corporations’ windfall profits.

Up to 45 million people in the U.K. are facing fuel poverty as temperatures drop, according to one recent study. Meanwhile, heavily subsidized fossil fuel giants are raking in record profits, which they use to block policies that would facilitate a green transition and dismantle their destructive industry.

Saturday’s national day of action was organized by Warm This Winter, a coalition of more than 40 progressive advocacy groups urging immediate government intervention to slash energy bills now—through emergency grants and retrofitting—and to ramp up renewable power generation, which is essential to leaving behind increasingly expensive and planet-heating fossil fuels for good.

“As the nights draw in and more and more people face a difficult winter, we’re uniting to show that it doesn’t have to be this way—the solutions exist and we’ve known what they are for a long time,” the coalition’s website reads. “We demand action from this government to keep everyone warm this winter.”

🚨 Today, as part of our national day of action, we’re right on the government’s doorstep in the heart of Westminster.

As the temperature drops, it’s never been more important to make them hear our demands to be #WarmThisWinter. pic.twitter.com/UcNruBMLWG

Tessa Khan of Uplift, one of the organizers of Saturday’s rallies, said in a statement that “people only need to look at their bills to know that the U.K.’s energy system is broken.”

“This Day of Action is to give a voice to those who want change from this government,” said Khan. “Instead of spending billions of our money subsidizing gas fields and expensive gas imports, which will guarantee bills stay high for years, people want sensible, practical solutions to permanently lower our energy costs.”

“People want those in fuel poverty given the support they need to stay warm this winter; they want help to insulate their homes; and they want this government to unblock onshore renewable energy, which will provide our homes with cheaper energy for years to come,” Khan added. “This is about coming together to tell the government to look after the needs of British people, and not the needs of wealthy oil and gas companies.”

Friends of the Earth climate campaigner Sana Yusuf noted that “the U.K. government has had all year to come up with solutions to help people facing extortionate living costs, yet its financial support scheme is not nearly enough to stop millions going cold this winter.”

“Why there isn’t a plan to insulate U.K. homes and boost the production of renewable energy beggars belief,” Yusuf continued. “Both are popular with the public and can help to lower energy bills permanently.

“If government inaction has done anything,” said Yusuf, “it’s galvanized local communities who are turning out today because they know a better way forward exists.

As part of the Warm This Winter day of action, Fuel Poverty Action and Don’t Pay U.K.—which seeks to build support for a mass energy bill non-payment strike—organized a series of “warm-ups,” wherein people who can’t afford to heat their homes gathered in public space to spread messages such as, “Freeze profit, not people.”

Don’t Pay, @FuelPovAction and local campaign groups are warming up at the British Museum to highlight fuel poverty and demand an end to the profiteering fuelling the cost of living crisis.#TakeBackPower #WarmThisWinter pic.twitter.com/90l7fP5aDx

“There is plenty of money to ensure that everyone can keep warm this winter,” said Ruth London from Fuel Poverty Action. “It just needs to be taken from the oil and gas giants that are taking it from us.”

Economic and environmental justice advocates have argued that providing adequate financial support to those in need and achieving a long-term solution to the dirty energy sector’s life-threatening price gouging and pollution requires a break with the neoliberal policies that have exacerbated Britain’s historic cost-of-living crisis.

Hours after lawmakers from the ruling Conservative Party voted in late-October to make Rishi Sunak the U.K.’s third prime minister this year, Greenpeace activists occupied the lobby of Parliament and called for simultaneously tackling surging utility bills and the climate emergency by taxing fossil fuel profits and using the revenue to bankroll residential upgrades and expanded clean energy production.

Earlier this year, the U.K. Treasury estimated that the nation’s energy firms are on track to enjoy up to £170 billion ($191.9 billion) in excess profits—defined as the gap between money made now and what would have been expected based on price forecasts prior to Russia’s invasion of Ukraine—over the next two years.

A 25% windfall tax on oil and gas producers approved in July is expected to raise £5 billion ($5.6 billion) in its first year. However, the existing surtax on excess fossil fuel profits includes loopholes enabling companies to significantly reduce their tax bill by investing more in oil and gas extraction, which the industry claims will increase supply. The recently enacted windfall tax, which lasts through 2025, also exempts electricity generators, even though Treasury officials attribute approximately two-fifths of the £170 billion in excess profits to such actors.

Given that winter energy bills are projected to triple compared with last year, calls have been mounting to increase the windfall tax rate on excess fossil fuel profits and extend it to electricity generators benefiting from rising oil and gas prices.

While his immediate predecessor, Liz Truss, ardently opposed windfall taxes—asserting that they “send the wrong message to investors”—Sunak introduced the current windfall tax in May when he was then-Prime Minister Boris Johnson’s chancellor of the exchequer.

Noting that soaring energy prices and greenhouse gas pollution are both driven by fossil fuel dependence, Greenpeace U.K. in October implored Sunak to do the following “to lower our bills long-term and reduce our emissions”:

“It’s time we have a government that brings down bills for good and plays its part in tackling the climate crisis,” said Greenpeace U.K., which is a member of the Warm This Winter coalition.

“Delay has cost lives. Chaos costs lives. And it will cost more lives this winter and every winter,” the group stressed. “No one benefits except the oil and gas profiteers. If the government were on the people’s side, the U.K. really could get on track to quitting oil, gas, and sky-high energy bills, forever.”