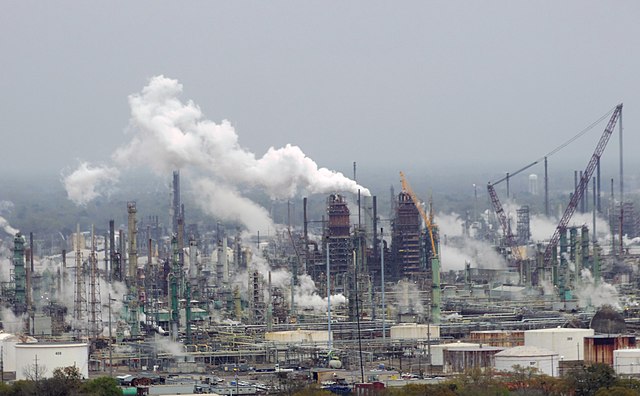 “This is the nail in the coffin of ExxonMobil’s claims that it has been falsely accused of climate malfeasance.”

That’s what University of Miami associate professor Geoffrey Supran said about a peer-reviewed study on the fossil fuel giant’s global warming projections published Thursday in the journal Science, which he began work on as a Harvard University research fellow.

“Our analysis shows that ExxonMobil’s own data contradicted its public statements, which included exaggerating uncertainties, criticizing climate models, mythologizing global cooling, and feigning ignorance about when—or if—human-caused global warming would be measurable, all while staying silent on the threat of stranded fossil fuel assets,” said Supran, the study’s lead author.

The new study from Supran, Harvard professor Naomi Oreskes, and University of Potsdam professor Stefan Rahmstorf—who is also a researcher at the Potsdam Institute for Climate Impact Research—comes as policymakers worldwide continue to allow major corporations to cash in on fossil fuels, despite the increasingly devastating impacts of heating the planet.

Supran and Oreskes have previously published peer-reviewed research on the “discrepancy between what ExxonMobil’s scientists and executives discussed about climate change privately and in academic circles, and what it presented to the general public,” confirming the findings from 2015 reports by Inside Climate News and The Los Angeles Times.

The first peer-reviewed analysis of an oil company’s climate research, by @geoffreysupran, @NaomiOreskes, @rahmstorf, shows Exxon’s climate research was spot on — and that management disregarded its own scientists’ findings. #ExxonKnew https://t.co/IEaDkrIN6h

For their latest study, the pair and Rahmstorf analyzed all known global warming projections documented and modeled by Exxon scientists between 1977 and 2003. The researchers found that 63-83% of the company’s projections were accurate.

“ExxonMobil’s average projected warming was 0.20° ± 0.04°C per decade, which is, within uncertainty, the same as that of independent academic and government projections published between 1970 and 2007,” the publication states.

The study includes the following graphic, which shows Exxon scientists’ projections from internal documents and peer-reviewed publications for the review period in gray along with historically observed temperature change in red. 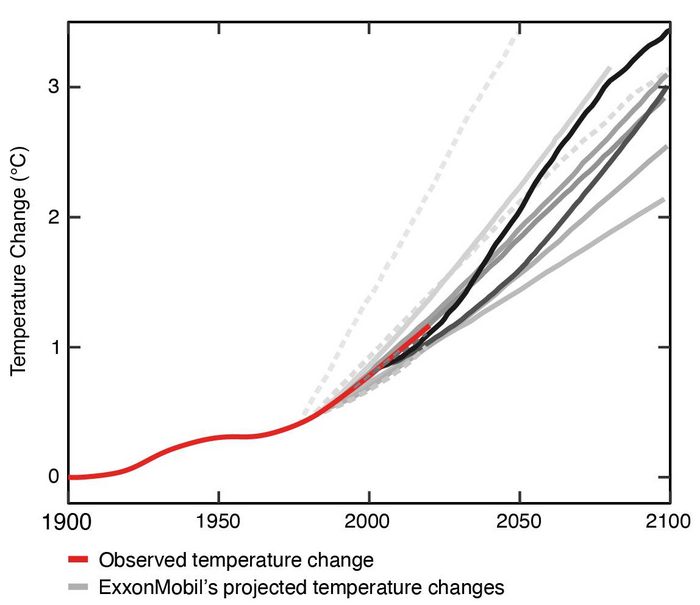 The company’s science was “actually astonishing” in its precision and accuracy—but so was its “hypocrisy because so much of the ExxonMobil disinformation for so many years… was the claim that climate models weren’t reliable,” Oreskes toldThe Associated Press.

In a statement to AP and other media outlets, Exxon spokesperson Todd Spitler said that “this issue has come up several times in recent years and, in each case, our answer is the same: Those who talk about how ‘Exxon Knew’ are wrong in their conclusions.”

“Some have sought to misrepresent facts and ExxonMobil’s position on climate science, and its support for effective policy solutions, by recasting well-intended, internal policy debates as an attempted company disinformation campaign,” he said. “ExxonMobil’s understanding of climate science has developed along with that of the broader scientific community.”

Meanwhile, climate advocates and experts echoed the points made by the study’s authors.

Thank you @GeoffreySupran, @NaomiOreskes and @rahmstorf for today’s groundbreaking study that so plainly lays out just how accurately Exxon scientists predicted the climate crisis: https://t.co/5kXRobB4JQ

“In all seriousness, this is an outrage,” the group added. “Exxon has had fairly accurate data on climate change for decades… and buried it. Instead, it has been fervently and publicly contradicting its own research to preserve its profit.”

As The Guardian reported:

Climate scientists said the new study highlighted an important chapter in the struggle to address the climate crisis. “It is very unfortunate that the company not only did not heed the implied risks from this information, but rather chose to endorse nonscientific ideas instead to delay action, likely in an effort to make more money,” said Natalie Mahowald, a climate scientist at Cornell University.

Mahowald said the delays in action aided by Exxon had “profound implications” because earlier investments in wind and solar could have averted current and future climate disasters. “If we include impacts from air pollution and climate change, their actions likely impacted thousands to millions of people adversely,” she added.

Drew Shindell, a climate scientist at Duke University, said the new study was a “detailed, robust analysis” and that Exxon’s misleading public comments about the climate crisis were “especially brazen” given their scientists’ involvement in work with outside researchers in assessing global heating. Shindell said it was hard to conclude that Exxon’s scientists were any better at this than outside scientists, however.

“The harm caused by Exxon has been huge,” University of Michigan professor Jonathan Overpeck told the AP. “They knew that fossil fuels, including oil and natural gas, would greatly alter the planet’s climate in ways that would be costly in terms of lives, human suffering, and economic impacts. And yet, despite this understanding they choose to publicly downplay the problem of climate change and the dangers it poses to people and the planet.”

Alyssa Johl, vice president of legal at the Center for Climate Integrity, said that “this quantitative assessment puts a fine point on the fact that Exxon knew with incredible precision that the burning of their fossil fuel products would result in temperature increases and severe climate harms in the 2000s and beyond.”

“They pretty much nailed these predictions with incredible accuracy. That cannot be refuted at this point,” Johl added, suggesting that the research could bolster climate liability lawsuits filed by dozens of U.S. states and municipalities against ExxonMobil and other fossil fuel companies for driving the global emergency.

“There are two very important pieces to the puzzle that need to be established and proven in these cases: the fact that oil and gas companies had longstanding knowledge of the causes and consequences of climate change, and that rather than disclose that information, they actively concealed and denied it,” she said. “This analysis shows once again that Exxon knew.”

As Fossil Free Media director Jamie Henn put it: “This is exactly like Big Tobacco companies knowing that cigarettes caused cancer but lying about it anyway. Exxon knew they were causing catastrophic damage and buried the truth. Time to make them pay.”