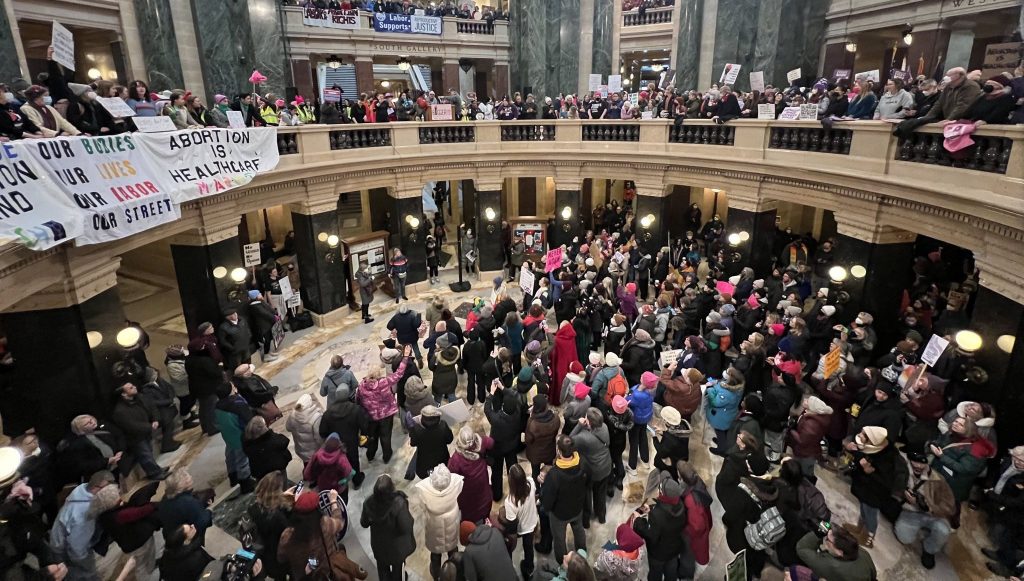 At more than 200 events in 46 states, demonstrators condemned the court’s 6-3 opinion in Dobbs v. Jackson Women’s Health Organization, which enables states to curtail or even prohibit access to reproductive healthcare. Since the ruling was handed down on June 24, Republican lawmakers have enacted deadly abortion restrictions in 26 states, including near-total bans in several.

“But as the fight turns to the states, they are going to learn that the overwhelming majority of Americans in all states support abortion rights—and women will fight to protect our rights and our lives,” she added.

Carmona spoke at the Wisconsin state capitol. Women’s March picked Madison rather than Washington, D.C. as the location of this year’s national protest because the group wanted to send “a clear message to elected leaders and to our base—we are going to where the fight is, and that is at the state level.”

Due to legal uncertainty around the status of Wisconsin’s pre-Roe abortion ban, enacted in 1849, providers have been forced to stop offering abortion care in the state.

We’re fired up and ready to march for our rights because this fight is bigger than Roe. They thought that we would stay home and that this would end with Roe — they were wrong.

We’re putting every politician on blast — if you come for our rights, we’ll come for you. Period. pic.twitter.com/MCaGABL0wX

Proud to be in Madison today fighting to let every politician know — if you come for our freedom, our families, or our futures, we’re coming for you. pic.twitter.com/UGXARrYQ2p

📢 In Wisconsin today to make ourselves clear:

We will never stop fighting for reproductive freedom!

Women’s March—with the support of nearly 50 organizations, including Planned Parenthood, Working Families Power, and the National Organization for Women—orchestrated “sister marches” in cities across the country.

“We are taking the fight to the states,” organizers said. “From Wisconsin, to Nebraska, to Georgia, to Arizona and Texas, women and our allies are defending abortion rights where they still stand, and working to put measures on the ballot to regain abortion rights in places where politicians are putting their agendas over the will of the people.”