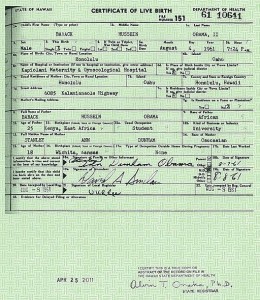 Every citizen of the United States is issued a social security number in order to work, live, conduct business, pay taxes and enter into agreements recognized by legal authorities. To obtain this social security number, a certificate of live birth must be provided to the government that validates the individual identity of each of its citizens.

When the 2010 SCOTUS decision of Citizen’s United declared that corporations are people, no provision was made for these “corporate personhoods” to provide the American people with a copy of their LIVE BIRTH CERTIFICATE that distinguishes them as a valid citizen with all the rights and privileges afforded them through the Constitution and Bill of Rights. Most corporations have a document called an Article of Incorporation, which serves as a set of policies and legal requirements whereby the officers in a corporation are guided toward a common goal or purpose. One of these things is not like the other.

This is the 6th year of Barack Obama’s two-term presidency. In the background noise of the country’s conversation, we still hear those that deny his birth certificate to be valid. Why are the American people not asking to see the live birth certificates of corporations? When were they born? Where? Who were the parents? Who delivered them? Were there any witnesses (birth certificates require two signatures to be valid)? What county jurisdiction retains those records, and when were they filed? How do we know they were not falsified if we do not ever see the original? If these are all questions we can ask in relation to the office of the president, and questions we are obligated to answer as citizens, is it not discriminatory to exclude one sect of the “population” from these requirements?

Occupy World Writes encourages all Americans to ask these questions not only of the corporations, but also of their state and national representatives and, most pointedly, of the Supreme Court of the United States members who wrote favorable opinions in the Citizen’s United decision. We do not expect to actually see any birth certificates, but we do believe the validity of the argument speaks for itself when combined with critical, reasonable thought.

SCOTUS has not made that illegal – yet.