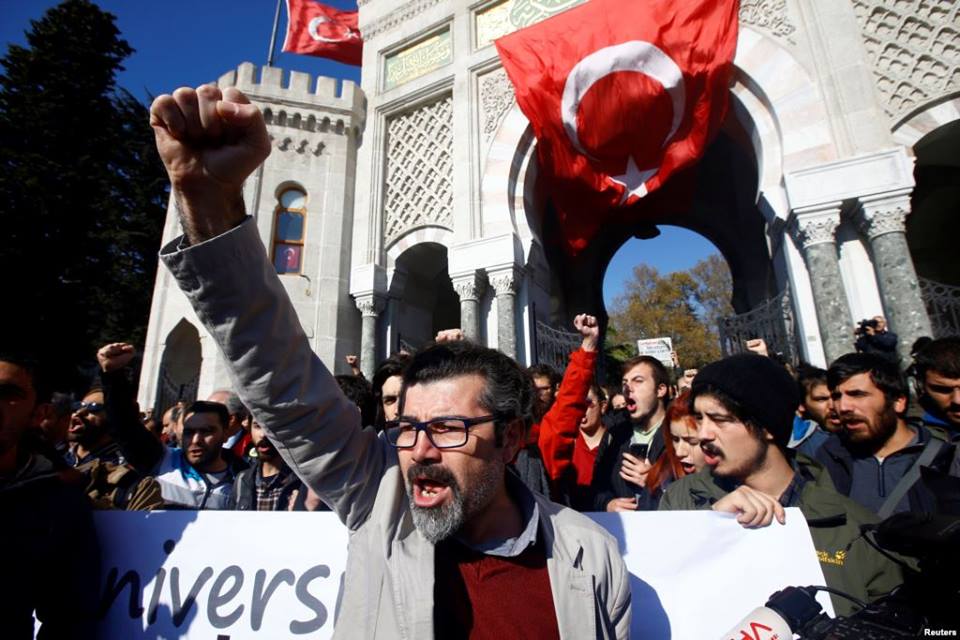 Protests as a UN Judge was arrested in Turkey. Photo: The Genocide Report/Twitter

Following months of sieges, bombings, burnings, arrests, detentions and human rights violations in an effort to rid the country of the “Kurdish issue,” the Turkish government appears to be resorting to starvation in their genocide attempts against their Kurdish civilians. Yesterday, the Turkish government shuttered the doors of the only remaining food bank in Diyarbakir, Turkey’s largest city in the southeast region. The Sarmaşik Association serviced 5,400 families, feeding 32,000 people. Below this article is a statement from the center and their urgent plea for action.

Since July of this year, Turkey has been suppressing dissent within the country, fearing an uprising that could topple President Recep Tayyip Erdogan. On July 15, a failed coup attempt opened the floodgate for loosening of laws and policies within the country that represented democracy, and instead anyone that opposes Erdogan and his regime has been labeled a terrorist and is subject to arrest, detention, torture and in many cases, death.

As early as July 27, reports on CNN surfaced that “Authorities have fired or suspended at least 50,000 people from various institutions, including judges, teachers, soldiers, police and journalists.” The report also details torture, rape, water and food deprivation, beatings, denial of medical care, denial of access of lawyers and many other atrocities not allowed under the Geneva Convention, and especially within a NATO member country.

Human Rights Watch issued a report on October 25, further documenting human rights violations perpetrated by the Turkish government against Kurdish civilians in the southeast region, including children, women and elderly people. The Washington Post published the story, but buried it. It went relatively unnoticed. Turkey continued to deny all charges.

As of now, Turkey is cracking down even harder, believing no one will stop them and that their actions are no one else’s affair.

Association for Struggle against Poverty and Sustainable Development

An Urgent Appeal for Support

After eleven years of active presence in the areas of struggling against urban poverty, building social solidarity networks, and promoting sustainable development in Diyarbakir, Sarmaşik Association for the Struggle against Poverty and Sustainable Development was shut down on November 12, 2016, by the Turkish government. Along with Sarmaşik Association, 370 civil society organizations were shutdown according to the the article eleven of the state of emergency (OHAL) law as part of another wave of post-failed coup crackdown against opposition groups in Turkey. All of activities of Sarmaşik Association are suspended for three months with the possibility of extending suspension for another period of time or becoming permanent.

Sarmaşik Association was founded in 2006 after a long process of discussions, meetings, and negotiations with people and organizations involved in the fight against poverty and advancing social solidarity in Diyarbakir in a rather unconventional environment. Sarmaşik was not only a civil society organization but also a platform for everyone in Diyarbakir to come together to help alleviating poverty in this severely impoverished city. The founding board of Sarmaşik Association consists representatives from Diyarbakir municipality and 32 active civil society organizations in Diyarbakir. These organizations are coming from a wide range of political tendencies in the city to produce an environment of cooperation between all parties to fight against poverty. Indeed, the intolerance against such an exemplary initiative was also an attack against the environment of cooperation despite all political differences.

Sarmaşik is an organization that has been providing assistance for the most disadvantaged, marginalized, and impoverished people in Diyarbakir that live much below the poverty line and under the risk of hunger. They have zero income and in most desperate need of assistance who are also mostly excluded from any social assistance mechanisms and programs in place. These are families that may not even have enough food for a daily meal. Sarmaşik Association has provided 5,400 families, or almost 32 thousand people, in the situation described above. Our association operates the only food bank in Diyarbakir that provides monthly basic food baskets to these families. Our educational support program also provides educational bursaries and free tutoring sessions for children of these families. We have done this work without any discrimination and in the most respectful way for these families’ dignity. In the last eleven years, we have assisted our families 180 thousand times in total. All the details of our operation are available and given to the government authorities, and our financial and operational records have been audited and reviewed multiple times by inspectors from the Turkish Ministry of Interior and verified by them.

Closing down Sarmaşik Association, before anything else, is violation of the right of 32 thousand people under the risk of hunger to access food. It means punishing the most excluded and vulnerable people with hunger and their existing living conditions. Leaving 32 thousand people without food and much needed assistance is not only a crime against them and our association but also a crime against humanity. With the coming cold season in Diyarbakir, these people are facing more difficult situation. We are deeply concerned about the daily survival of our 5,400 families. We call everyone and every organization concerned with poverty, inequality, injustice, and human rights around the world, especially anti-poverty groups, food banks, and development agencies to support Sarmaşik Association in such difficult times. You can do so by sending emails, faxes, and letters of support and solidarity for Sarmaşik to Turkish embassies in your countries, the Parliament of Turkey, Turkish Prime Minister, and the Turkish Ministry of Interior and protest shutting down Sarmaşik Association (please find their contact information below). We ask you to urge your governments to put pressure on the Turkish state to open our association and to end the unlawful and ongoing crackdown and purge of the dissent in Turkey. Please circulate this appeal among your friends and networks. You can find more information on Sarmaşik Association and our activities in the attached document to this email. Please don’t hesitate to contact us if you have any questions.

On behalf of Sarmaşik Association

You can find the contact info of Turkish embassies and consulates in your countries on this webpage:

Contact info for the Turkish Parliament, Turkish Prime Ministry and Turkish Ministry of Interior are below: