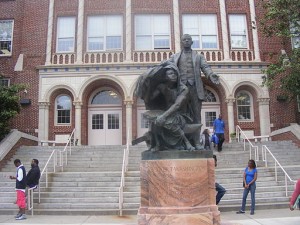 Jury selection began August 11 for what is expected to be a six-month long trial of Atlanta School District teachers and principles accused of cheating by raising scores on standardized tests to achieve personal bonuses and additional school funding.

The original case involved 178 teachers and principals from across the entire district. Of those accused, many accepted plea bargains or took early retirement to avoid the public trial phase of the case. Those who took plea bargains are now witnesses for the state against their accused peers.

The scandal is the brainchild of Dr. Beverly Hall, 2009 National Superintendent of the Year. She has collected over $100,000 of personal funds through her program which included a “culture of fear” to promote the increasing of the scores in the testing. Many involved state they did so because they feared losing their job if they did not. But Dr. Hall is not on trial at this time. She is currently undergoing treatment for cancer, and her further prosecution has been delayed, according to official records.

If found guilty, those accused of cheating  in the scandal could face heavy fines, imprisonment or both.

In Washington, we hear cries that the Department of Education is ineffective. The method of standardized testing has been in question for years, while educators scramble to develop a more accurate system of gauging teaching and curriculum effectiveness. Yet nowhere do we hear battle cries for protecting our children from the criminals that make their living by taking advantage of our trust placed in them for the care and educating of our children.

There are arrests of coaches for sexual abuse or rape of students. There are teachers who openly discriminate in the classroom. There are bus drivers who park their buses at the end of their routes and never bother to notice the student in the back that fell asleep and didn’t get off the bus.

Occupy World Writes believes the most precious resource of our nation is deserving of more protection than that given corporations by the SCOTUS. We believe our nation’s belts should not be tightened around the waists of our children. We support education that fairly tests students for appropriate levels of learning, and that removing ineffective educators is as important as hiring good ones. We salute and thank those that are true educators and recognize there is a tremendous difference in the hearts and souls of these two very different groups who say they have the same mission.

There are certain things NO ONE can cheat a child out of learning. We hope the students of the Atlanta School District are able to learn from the experience of those who attempted to take advantage of them for personal profit.