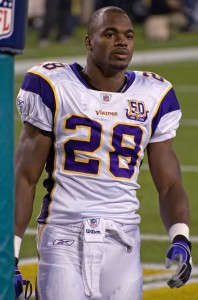 A week ago, we wrote a piece about Ray Rice and the NFL’s waffling on domestic abuse cases. Normally, we wouldn’t think about the NFL, much less write about it – none of us are huge football fans. However, since our last piece, some very disturbing things have happened that have everything to do with our previous story.

On Thursday, the Baltimore Ravens played their first game since Ray Rice’s indefinite suspension was made public. There were a number of fans wearing Ray Rice jerseys, and saying such things as “I don’t condone domestic assault, but I support Ray Rice.” One woman was given air time in a lot of the media; she said “I don’t condone domestic violence, but she hit him first. I’m sorry, but I think that if a woman hits a man, the man can hit her back.” The other reoccuring theme besides the “I don’t condone domestic violence” bit (which sounds a lot like the “I’m not a racist, but…” theme) was that he brought a Super Bowl championship to Baltimore, which somehow lent respectability to him. Really, people? Is that where your priorities lie?

Then on Friday, Minnesota Vikings running back Adrian Peterson was indicted by a Texas grand jury for child abuse. The charges stemmed from Peterson beating his 4 year old son with a branch as punishment for something the child had done. He beat him hard enough that the boy had welts on his legs, buttocks and back. After the news of the indictment broke on Friday, the Vikings benched Peterson for last Sunday’s game against the New England Patriots; a responsible move on their part. The Vikings lost their game – badly. Yesterday, the Vikings said that Peterson would play this Sunday.

Yesterday was a big day in the domestic abuse crisis surrounding the NFL. After the Vikings reinstated Peterson for Sunday’s game, news came out about another child abuse allegation about him. Ray Rice is appealing his suspension, claiming that at the most, he should be suspended for the six games that the new NFL rules call for. He further claims that he’d told the NFL’s head office everything about the domestic abuse incident in April, contradicting NFL Commissioner Roger Goodell’s claim that he (Goodell) didn’t know all the facts until TMZ leaked the second video last week. Meanwhile, the three other players who have been charged with domestic assault are playing and practicing with their teams every week.

Does anybody really think that the NFL will take the needed actions to make sure that the families and significant others of their players are safe from domestic violence? We sure don’t. Are these the role models we want for our children? Absolutely not.

The NFL is a huge business, taking in billions of dollars a year. It’s becoming more and more apparent that the NFL cares much more about their bottom line than they do about the players and their families’ health and safety, not to mention that they still promote these people as role models. Late yesterday, Radisson Hotels announced that they were suspending their sponsorship deal with the Vikings. Radisson spokesman Ben Gardeen said in an email; “Radisson takes this matter very seriously, particularly in light of our long-standing commitment to the protection of children. We are closely following the situation and effective immediately, Radisson is suspending its limited sponsorship of the Minnesota Vikings while we evaluate the facts and circumstances.”

Occupy World Writes applauds Radisson’s actions, and we encourage all of the other NFL sponsors to do the same. We’re revolted by the excuses we’ve heard from the media and fans for both the NFL’s and individual players’ behavior. We’d like to think that we as a nation are better than glorifying what’s essentially a replay of the Roman era’s gladiator events.