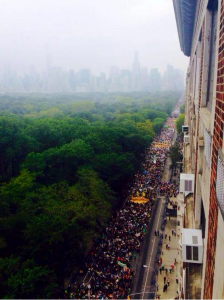 On Tuesday, the U.N. Climate Summit begins. 120 world leaders will meet at the United Nations in New York to discuss ways to tackle the growing threat of carbon pollution.

Yesterday, the people decided to provide them with some incentive to do the right thing. Somewhere around 2800 events were planned around the globe as part of the People’s Climate March. In New York City, more than 400,000 people turned out for the march, including U.N. Secretary-General Ban Ki-moon and former Vice President Al Gore, among others.

Stanley Sturgill, a retired coal miner from Kentucky now suffering from black lung, said at a press conference before the march: “Today I march because I want to behold a brighter future. We have destroyed ourselves. We have destroyed our health and I’m here because our political leaders have failed us. We know together we can build our bright future.”

Bill McKibben of 350.org, who was the originator of the march, said: “The stakes are the future of the planet. And so far, we’ve seen essentially no action from world leaders that matter on this question.”

While the U.S. is claiming that it’s leading the way in climate change, the world spewed more carbon into the atmosphere last year than ever before. Who were the main culprits? China, India and the U.S. And of those three countries, only the U.S. is attending the summit; China and India announced earlier this month that they wouldn’t be attending. Together China and India account for nearly a third of total emissions, and their carbon footprint is growing in contrast to the U.S. and Europe, where it’s basically flat.

We’d like to think that this represents a shift in global awareness in regards to climate change, but we have to temper our optimism. We think Andy Borowitz said it best in his piece about the march: “A climate-change march that organizers claim was the largest on record is nevertheless unlikely to change the minds of idiots, a survey of America’s idiots reveals.” Unfortunately, there still seems to be a lot of idiots out there…