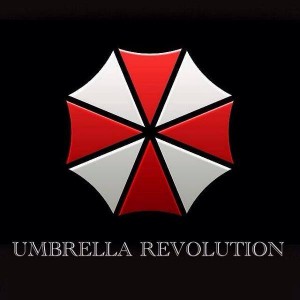 Back in July, we wrote a piece about the democracy movement in Hong Kong. The piece was published the day after 500,000 people took to the streets for reasons that should sound familiar to us all; in many ways, it sounds just like here in the U.S.

Hong Kong has historically had more freedom and more of a democracy than the mainland has; when the British handed over Hong Kong to China back in 1997, preserving Hong Kong’s relative autonomy was one of the promises that China made to the British and to Hong Kong residents. The Chinese furthermore pledged that in 2017, Hong Kong’s citizens would be allowed to democratically elect their top leader for the first time.

You see, in Hong Kong, the candidates for leader are selected by a nominating committee, which consists of corporate representatives and members of the upper class, In other words, just like our system, except that the Chinese are much more honest about the procedure than our political parties are. Non-elected officials get their appointments through patronage, and not the skills they have. Sound familiar to you?

In June, the Chinese government issued a “white paper” claiming “comprehensive jurisdiction” over Hong Kong and that “the high degree of autonomy of [Hong Kong] is not an inherent power, but one that comes solely from the authorization by the central leadership.” Then, in August, the Chinese government stated that although citizens would vote for the chief executive (the head government office in Hong Kong), the candidates would have to be approved by a , special committee. Needless to say, the citizens were not impressed. 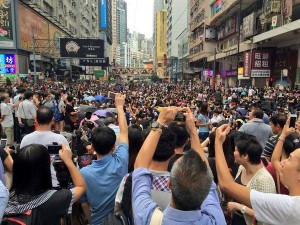 Last Monday, thousands of students began a week-long boycott of classes at CUHK to protest the government’s decision. Lester Shum of the Federation of Students said in speaking to the demonstrators,  ““In the colonial days, the British ruled Hong Kong as if they were a group of refugees and obedient subjects. On August 31, [Beijing’s] decision would allow the central government and [tycoons]to continue to manipulate the election. Isn’t that applying the colonial [approach]to Hong Kong?”

Then, Occupy Central joined the students. The main force behind the July protests, Occupy Central was originally going to launch a “civil disobedience” campaign on October 1, a national holiday celebrating communist China’s founding. But, as the student protests escalated, they decided instead to join the students. On Friday, the protesters peacefully occupied the forecourt (think courtyard) in front of the main government building. 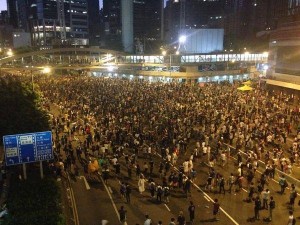 On Sunday afternoon, the police moved in. Firing tear gas canisters into the crowd, they were also stopping supporters of the protest from entering the area. The protesters who couldn’t get into the forecourt spread out into the nearby streets, and the confrontations with police spread across the city. As the police crackdown spread, outraged citizens joined the protesters – the unrest spread even more. At this point, the student leaders began referring to the protests as the Umbrella Revolution, as the protesters were using umbrellas not only to keep dry (it rains a lot in Hong Kong this time of year), but as shields against tear gas and pepper spray.

The Chinese central government issued a statement endorsing the police actions, as did Hong Kong’s current chief executive, who’s basically a front for the Beijing government. How this will go over with the protesters remains to be seen; we’re guessing it won’t go over too well.

Occupy World Writes stands in solidarity with the people of Hong Kong. In what’s becoming a familiar sight at protests, some of the demonstrators are using the same “hands up, don’t shoot” gesture used by protesters in the Ferguson, Missouri protests of last month. We find this to be fitting; just as we are all Michael Brown, we’re also all the people of Hong Kong. 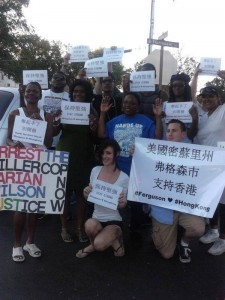