On Tuesday, hundreds of riot police clashed with students protesting a new education law in Letpadan, Myanmar. According to eyewitness accounts, students, monks and journalists were beaten with batons and sticks by security forces and then dragged into trucks. Authorities say that more than 120 people were arrested. 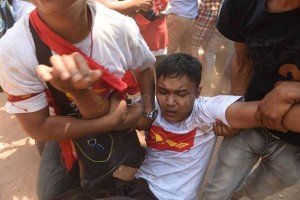 One hundred students had started off in Mandalay more than a month ago, and were planning to march 400 miles to Yangon to protest the new law that puts all decisions about education policy and curriculum in the hands of a group consisting mostly of government ministers, The students are callling for changes to the new law, including decentralizing of the school system, teaching in ethnic languages, and allowing the formation of student unions.

When the students reached Letpadan (90 miles north of Yangon), they were blocked by police. Here, they began a sit-in, and were joined by monks and other activists over the next nine days. On Tuesday, it appeared as if the authorities were going to allow them to continue. U Zarni, a spokesman for the Cooperative Committee for Trade Unions, told CNN that the students had been “given the red light” on proceeding to Yangon.

The police said that they could march to a nearby town, and then be transported to Yangon by government trucks. However, the agreement fell apart when they demanded that the protesters refrain from shouting slogans or waving flags. The police then set up barbed wire barriers, which some students and monks tried to get through. 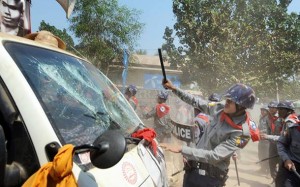 The police then charged the protesters, and chased them into an old Buddhist monastery. There, the protesters were beaten and thrown into waiting trucks. Zarni described what happened: “They broke a reporter’s camera and cheered about it. They hit women. They hit monks who were also there. They went into the monastery and detained everyone who had run to hide in there.”

The government is pushing a different spin, needless to say. Myanmar’s Information Minister Ye Htut told a local television station; “Despite requests for peaceful negotiations, student protesters tried to penetrate the police blockade and the police were legally obligated to disperse them.” He went on to call the crackdown a “sorrowful incident,” and said the government tried “as hard as it could” to achieve a peaceful settlement and had sought to “avoid undesirable incidents.”

Ye Htut also claimed that the handling of the Letpadan protest “will have no impact on democratic reform.”  We wonder about that to be honest. In 2011, Myanmar started the transition to a civilian government after decades of military rule. However, as we pointed out in a piece we ran in January, the military is still calling the shots.

Khin Lay, director of the Triangle Women Support Group, said; “Students, human rights, women’s rights — we’re all extremely angry about the way we have been treated over the years. But we’ve been waiting for the 2015 elections with patience because we believe in the democracy movement, and we’re hoping that we have the opportunity to exercise our right to vote. So they should show us some respect, too.”

We said at the end of our January piece; “The people of Myanmar deserve better; they’ve suffered more than long enough.”  Hopefully, the powers that be in Myanmar will see it the same way.