By Claire Bernish. Published May 11, 2015 by The AntiMedia.org 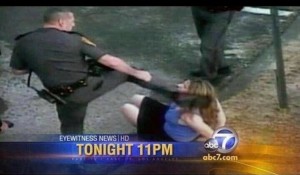 In what could hardly be called a surprise, the UN Human Rights Council chastised the US over its epidemic of police violence, discrimination, needless killings, and general neglect, following through with recommendations made in its first review in 2010.

The Universal Periodic Review (UPR) takes place every four years to scrutinize the human and civil rights practices of each of the UN’s 193 member nations. Delegates from 117 countries took the opportunity to lambaste the US’ record of civil rights violations exacted by its brutal and racist police forces.

In an attempt to fend off the inevitable, James Cadogan, a senior counselor in the Department of Justice’s Human Rights Division, said the US must“rededicate ourselves to ensuring that our civil rights laws live up to their promise,” listing several “tragic deaths” that sparked numerous demonstrations and wide-scale unrest across the country. However, he seemed to be blind to the fundamental basis for such outrage saying the US wishes to “identify and address potential policing issues before they become systemic problems,”, even asserting a fictitious good record for holding violators accountable. As Mary McLeod, acting legal adviser to the US Dept of State, put it, “We’re proud of the work we’ve done since our last UPR.” Most would disagree.

What the US representatives touted as improvements, actually do more to highlight the systemic issue they claim to be on the lookout for. Cadogan cited 400 instances in the past six years in which charges were brought against law enforcement officials, but this doesn’t figure in the disproportionately light punishment that often results from prosecution of police officers. Even his own preemptive statement, naming Michael Brown and Eric Garner as examples, speaks far more to police impunity than accountability — and is hardly reflective of the totality of incidents. Over 400 people have been killed by police in 2015 alone.

“Chad considers the United States of America to be a country of freedom, but recent events targeting black sectors of society have tarnished its image,”  said Awada Angui, the delegate from that country.

The representative from Namibia, Gladice Pickering, echoed the general consensus saying the US needs “to fix the broken justice system that continues to discriminate against [marginalized communities], despite recent waves of protest over racial profiling and police killings of unarmed black men.”

Critics across the board urged improvements in training methods and legislation and included goals to eliminate racism and end excessive force.

“I’m not surprised that the world’s eyes are focused on police issues in the US,” said Alba Morales of Human Rights Watch. “There is an international spotlight that’s been shone [on the issues], in large part due to the events in Ferguson and the disproportionate police response to even peaceful protesters.”

A federal investigation was launched on Friday to determine if police in Baltimore have instituted a pattern of discrimination following reports from residents of brutal abuse before and after Freddie Gray was killed in police custody. Such investigations are often too little, too late for victims and their families, who see them more akin to the cynical joke; “we investigated ourselves and found we did nothing wrong.”

Martinez Sutton, whose 22-year-old sister, Rekia Boyd, was shot by an off-duty Chicago police officer in 2012, observed from the sidelines. He feels that her killer’s acquittal three weeks ago is frustratingly typical: “I do not expect them to do anything because – I mean: Let us be real, it has been going on for years and what has been done?  As I stated before, they say the guilty should be punished.  I want them to show us instead of tell us. My sister was innocent, so why isn’t anybody paying for her death?”

The UN will issue its report on the review along with recommendations on Friday, though its contents probably won’t be of much consequence considering the US “largely failed” to implement any of the 171 changes suggested in the previous report.

There isn’t much comfort to be found in an atmosphere where calling the cops for assistance could potentially be your own death sentence. But if our own government doesn’t see a problem with its policing policies, at least 117 other countries around the world are starting to ask questions.

This article is published under a Creative Commons Attribution license.