‘The ultimate goal of anti-abortion extremists in Congress is to promote their political agenda of banning safe, legal abortion in this country.’ 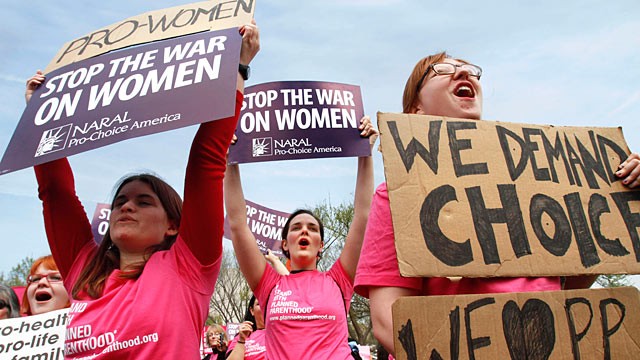 Photo via Let Your Voice Be Heard

An ideological and at times sorely misinformed debate—one catalyzed by the right-wing’s latest “underhanded smear campaign” targeting women’s health—gripped the U.S. House of Representatives on Friday, as the chamber approved two anti-choice bills, one of which strips Planned Parenthood of all its federal funding for one year.

The Republican-majority House passed both the Defund Planned Parenthood Act of 2015 (roll call here), which cuts off federal funding to the critical healthcare provider for one year unless it stops providing abortions, and the Born-Alive Abortion Survivors Protection Act (roll call here), which would impose criminal penalties on doctors who do not try to save a fetus that “survives an abortion.”

Both measures are opposed by women’s health organizations, the White House (pdf), and a majority of the American public. President Barack Obama has vowed to veto the bills if they reach his desk, saying they would “disproportionately impact low-income individuals” and “likely have a chilling effect, reducing access to care,” respectively.

In advance of the votes, Planned Parenthood circulated a memo urging lawmakers to vote against the bills. “The ultimate goal of anti-abortion extremists in Congress is to promote their political agenda of banning safe, legal abortion in this country,” the memo read.

The Born-Alive Act, they said, “would interfere with the sacred doctor-patient relationship and substitute a physician’s best judgment with that of a group of politicians.” 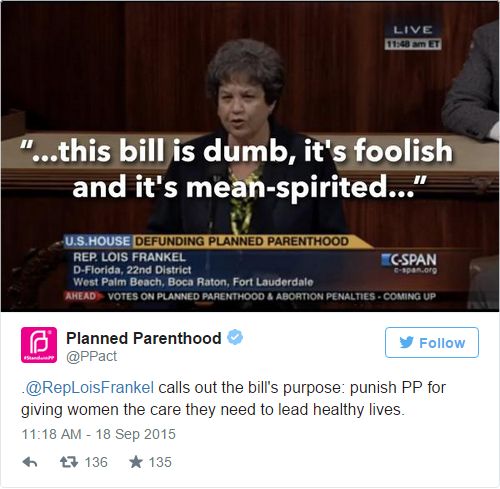 And following the votes, Center for Reproductive Rights (CRR) president and CEO Nancy Northup declared: “It is unconscionable that politicians in Congress continue to play this game of keep-away with women’s basic healthcare services. Without access to critical health care offered at Planned Parenthood clinics across the U.S., the lives and health of countless women will be at grave risk.”

“We continue to stand with Planned Parenthood and high-quality reproductive health care providers against this underhanded smear campaign,” Northup continued. “All women deserve access to high-quality, affordable health care services and we call upon Congress to reject any measures which validate these unfounded attacks.”

Right-wing groups and legislators are at odds about the best way to implement their anti-choice agenda. The Washington Post explained some of the political considerations at play:

The bills were brought to the House floor amid an effort by a group of conservative members to tie Planned Parenthood funding to the approaching government funding deadline in order to create leverage with President Obama and congressional Democrats. But Obama has pledged to veto any measure targeting Planned Parenthood or abortion rights, and Senate Democrats would likely filibuster any such bill making a veto unnecessary.

The Senate took an August test vote on a Planned Parenthood defunding bill, which fell well short of the 60 votes necessary. Senators are expected to take a procedural vote Tuesday on a bill banning abortions after 20 weeks of pregnancy in a related effort to demonstrate the political hurdles facing any bill restricting abortion rights.

Referencing that very bill, CRR’s Northup said: “Rather than advancing policies that would actually benefit women and their families, politicians in Congress seem to be fixated on laws that violate women’s rights and place their health at serious risk.”