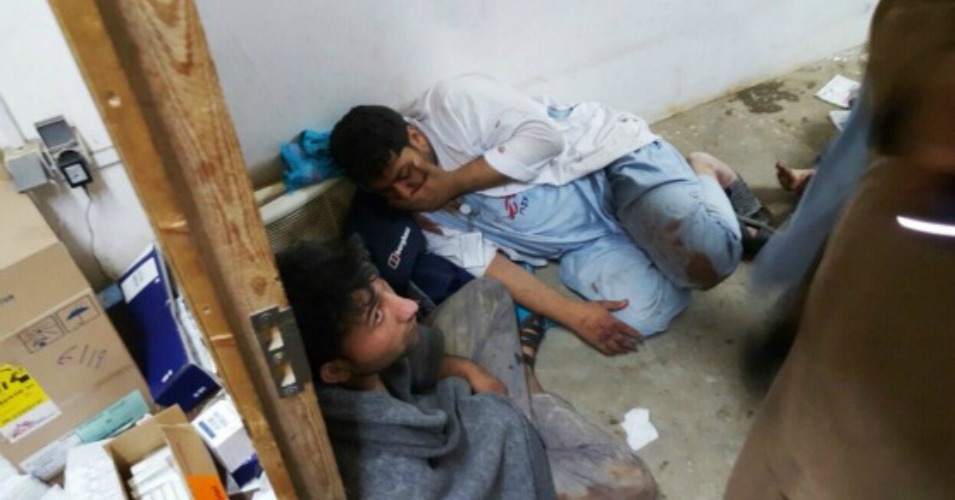 Médecins Sans Frontières doctors huddle for safety amid bombings on their hospital in Kunduz, Afghanistan. (Screenshot)

A suspected U.S. airstrike on a trauma center run by Doctors Without Border/Médecins Sans Frontières (MSF) on Saturday has killed at least nine staff members and wounded up to 37 people.

An additional 30 are missing, according to a statement by MSF. The death toll is expected to rise, although the medical charity said it believed all of its international staff had survived.

The strikes took place around 2:10 am in the northern city of Kunduz and continued for another 30 minutes, MSF said. At the time, the hospital had 105 patients and caretakers, along with 80 staff.

MSF said it had circulated coordinates of the trauma center’s location to all sides fighting in the country, including Kabul and Washington.

“We are deeply shocked by the attack, the killing of our staff and patients and the heavy toll it has inflicted on healthcare in Kunduz,” said MSF director of operations Bart Janssens. “We do not yet have the final casualty figures, but our medical team are providing first aid and treating the injured patients and MSF personnel and accounting for the deceased. We urge all parties to respect the safety of health facilities and staff.”

A U.S. military spokesperson confirmed that a strike occurred in Kunduz that “may have resulted in collateral damage to a nearby medical facility.” He said the bombardment was targeting “individuals threatening the force.”

Fighting broke out earlier in the week. MSF said its Kunduz center treated 394 patients since clashes began on Monday.

An anonymous staff member told the Guardian, “I was inside my office. Around 2am, the plane started bombing the main building of MSF. It lasted one and a half hours. After 3.30am, I came out from my office and saw all of the hospital was on fire.”

At the aid group’s bombed-out hospital, one wall of a building had collapsed, scattering fragments of glass and wooden door frames, and three rooms were ablaze, said Saad Mukhtar, director of public health in Kunduz.

[….] Many patients and staff remain missing after the attack which happened when almost 200 patients and employees were in the hospital, the only one in the region that can deal with major injuries, said Medecins Sans Frontieres, which is based in Switzerland.

U.S. officials went to TIME Magazine yesterday to announce that Russia will be creating more terrorists than they kill as a result of misguided airstrikes in Syria. “We believe if you inadvertently kill innocent men, women and children, then there’s a backlash from that,” Lieut. General Bob Otto, the Air Force’s deputy chief of staff for intelligence, surveillance and reconnaissance said. “We might kill three and create 10 terrorists. It really goes back to the question of are we killing more than were making?”

It’s impossible to fathom what the U.S. media would be saying and doing if Russia did something like this in Syria. By contrast, the reaction to this airstrike by their own government will be muted and filled with apologia, ironically quite similar to the widely vilified caricature of Jeb Bush’s comments about the Oregon shooting spree: “stuff happens.”

Jean-Nicolas Marti, head of the International Committee of the Red Cross (ICRC) delegation in Afghanistan, said the strike was “an appalling tragedy. Such attacks against health workers and facilities undermine the capacity of humanitarian organizations to assist the Afghan people at a time when they most urgently need it.”

The ICRC noted that under international humanitarian law, “the civilian population, medical personnel, ambulances and medical facilities must be respected and protected in all circumstances, and the work of medical personnel must be facilitated.”