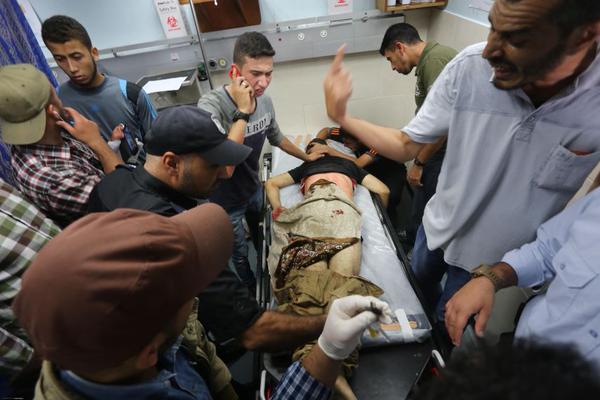 An Israeli army spokesperson said there were 200 demonstrators, and that “Forces on the site responded with fire toward the main instigators to prevent their progress and disperse the riot.” According to the army, the protesters were throwing rocks and rolling burning tires toward the military forces.

“The Israeli army uses snipers, and most of the wounds are in the head and throat,” Haaretz reports Dr. Ashraf Al-Qudra, a spokesperson for the Palestinian health ministry, as saying.

Joel Greenberg writes for the Financial Times that an “Israeli spokeswoman could not explain why troops had not instead used non-lethal crowd control weapons.”

Friday’s violence comes as clashes have increased in frequency since Israeli security forces began to crack down on Palestinian worshipers at the Al-Aqsa Mosque compound in last month.

“It is very dangerous here,” Ezz Zanoun, a Gaza-based photographer who was at the protest, told Al Jazeera. “They always shoot at the border, but it’s much worse today than usual.”

“At first they started shooting with rubber-coated steel bullets and stun grenades, then they fired live ammunition at us,” he said.

The Palestinian Solidarity Movement called the attacks on Gaza protesters “cruelty towards the unarmed young people [who are] exercising their right to protest against the brutal actions of the illegal Israeli occupation, as the Gaza Strip is surrounded by military turrets, tanks, drones and fences equipped with high technology.”

And on Thursday, Zeid Ra’ad Al Hussein, the UN High Commissioner for Human Rights, warned, “The security situation has deteriorated dramatically over the past week in the West Bank, including East Jerusalem.”

High Commissioner’s Office said that since Sept. 28, in addition to the hundreds injured by tear gas and rubber bullets, at least 134 Palestinians had reportedly been injured from live ammunition used by Israeli forces.

“The use of any firearms by law enforcement should be the exception, and only where less extreme means are insufficient to put a stop to an imminent threat of death or serious injury,” Al Hussein stated.