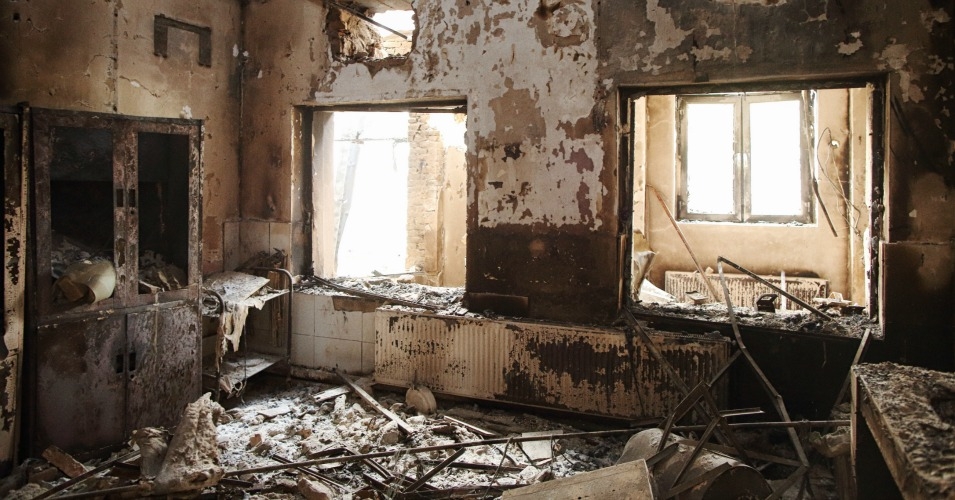 A devastated room adjacent to the emergency entrance in the western wing of the Outpatient Department building. (Photo: Andrew Quilty/Foreign Policy)

Doctors Without Borders (MSF) said that the U.S. military’s forcible intrusion into its hospital in Kunduz, Afghanistan on Thursday potentially destroyed evidence of its war crime and underscores the need for a truly independent investigation into the U.S. bombing that killed 22 people.

“[MSF] confirms that an armored vehicle forced its way through the closed main gate of our hospital in Kunduz yesterday, Oct. 15, at 1:30 p.m. local time,” the organization said Friday. “Their unannounced and forced entry damaged the gate to the property, destroying potential evidence in the process and causing stress and fear for the MSF team.”

“An MSF team had arrived earlier in the day to visit the hospital. Only after the armored vehicle forced its way into our compound was MSF informed that this intrusion was in fact a delegation from the U.S./NATO/Afghan investigation team,” the group continued. “This happened despite an agreement made between MSF and the joint investigation team that MSF would be given notice before each step of the procedure involving the organization’s personnel and assets.”

The U.S. bombing of the MSF hospital on October 3 killed 10 patients,12 staff members, and wounded 37 people. The Pentagon acknowledged earlier this month that its Special Forces were responsible for the deadly attack, but only after changing the official story at least four times, including initial denials of culpability and claims of justification.

Citing an unnamed former intelligence official, the Associated Press reported Thursday that “special operations analysts were gathering intelligence on an Afghan hospital days before it was destroyed by a U.S. military attack because they believed it was being used by a Pakistani operative to coordinate Taliban activity.”

The newly-revealed details could indicate “that the hospital was intentionally targeted,” Meinie Nicolai, president of the operational directorate of MSF, told AP. “This would amount to a premeditated massacre.”

Nicolai added that MSF staff “reported a calm night and that there were no armed combatants, nor active fighting in or from the compound prior to the airstrikes.”

Some have expressed skepticism of the AP report, penned by journalist Ken Dilanian, due to the article’s reliance on an anonymous source to spread allegations that the hospital was being used by the Taliban or its associates.

The medical charity has repeatedly declared that the bombing of the hospital—a protected space under humanitarian law—amounts to a war crime and only an independent probe can be trusted to reveal the truth about the attack. While the U.S., NATO, and Afghan authorities have launched their own investigations, MSF argues “it is impossible to expect parties involved in the conflict to carry out independent and impartial investigations of military actions in which they are themselves implicated.”

On Thursday, MSF launched a petition “to call on President Obama and the United States to consent to an independent investigation.” MSF press officer Tim Shenk told Common Dreams that the initiative garnered 50,000 signatures in the first 24 hours.

While U.S. President Barack Obama formally apologized to MSF for the deadly attack, the U.S. government has yet to consent to an impartial, international investigation.

Obama did, however, announce Thursday that he is defying earlier pledges and extending the U.S.-led war in Afghanistan—which entered its 15th year last week—by leaving up to 5,500 soldiers in the country until at least 2017.