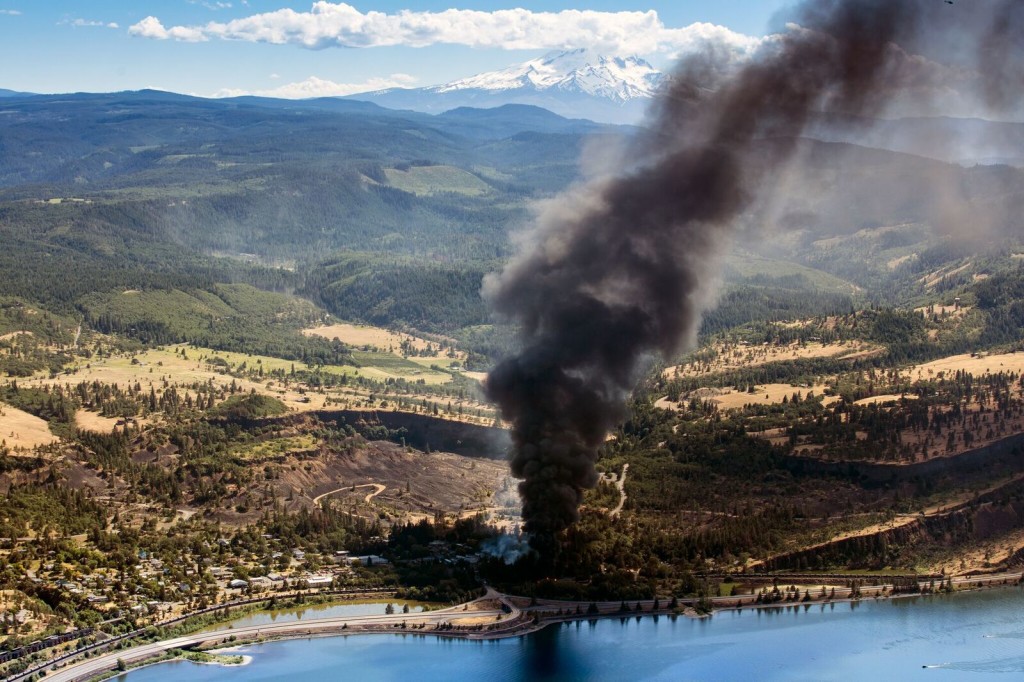 “I want to apologize to the community,” Union Pacific spokesperson Raquel Espinoza said at a news conference. “This is the type of accident we work to prevent every day.”

Though Espinoza’s assurances that the company would pay for the cleanup costs may have come as relief to some, the comment also held a tacit acknowledgement that the existence of oil-by-rail is an inherent danger to the ecology, wildlife, and people who live along or near these routes.

The derailment, in the scenic Columbia River Gorge, manifested the fears of environmentalists who have long argued against shipping oil by rail — especially through populated areas or along a river that’s a hub of recreation and commerce. The tank cars were carrying especially volatile crude from the Northern Plains’ Bakken region, which has a higher gas content and vapor pressure than other types of oil.

More than 100 people rallied and marched in nearby Hood River, Oregon, on Saturday to call for a halt to the practice.

Jared Margolis, an attorney for the Center for Biological Diversity, which has joined with other local and national groups in calling for stronger protections against oil trains, said Friday’s derailment proves once more—and despite company assurances and new regulations—that there is no safe way to transport this material.

“Unfortunately we’ll continue to see these fiery derailments even with the new regulations in place,” said Margolis. “Just as safety experts predicted, the new rules are insufficient, and people, wildlife, rivers and lakes will continue to pay a huge price for the government’s failure to take steps to adequately protect us from oil trains.”

In a weekend blog post, Matt Krogh, the extreme oil campaign director for the environmental group Stand, explained that because these oil derailment fires burn so hot—and the fuel is so volatile and toxic—there is simply no way for local fire departments to adequately deal with such situations when they occur. In fact, outside of ordering evacuations and creating perimeters, federal guidelines advice first responders to just stand back and let the fires burn out.

“Federal emergency response guidance and fire chiefs have long recognized that there is no effective emergency response to a crude oil derailment fire event,” writes Krogh. “If even one tank car of crude oil is involved in a fire, federal guidelines are clear that firefighters should pull back half a mile and let it burn. And that is another good reason that oil trains are too dangerous for the rails.”

On Saturday, nearly a thousand feet of containment booms had been placed in the Columbia River after oil sheens were spotted near the mouth of a local stream, downriver from Friday’s derailment. 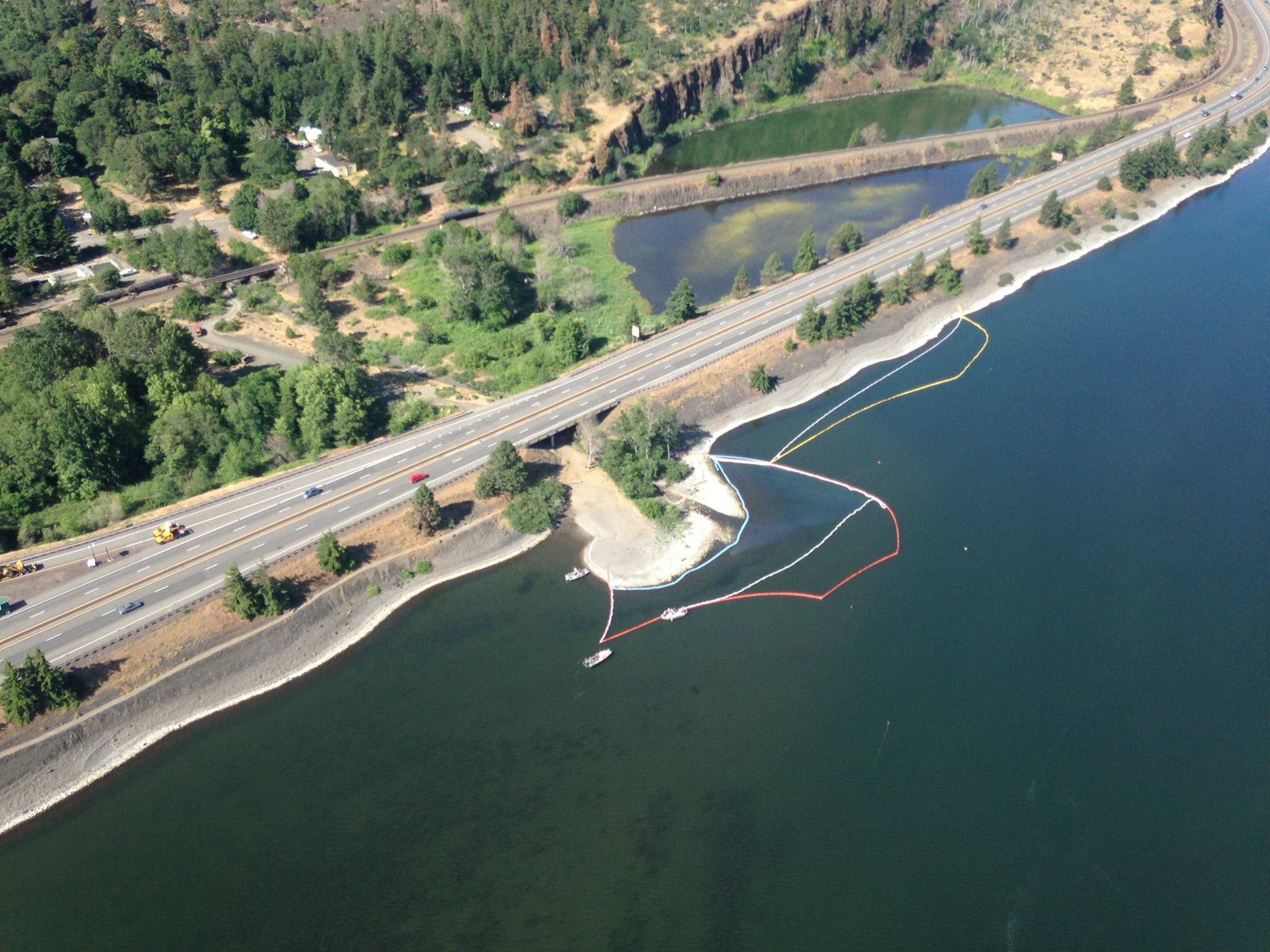 Given that this particular train derailed at such a point to avoid hitting homes or spilling much larger amounts into local waterways—which led the Mosier fire chief Jim Appleton to say the community actually “dodged a bullet”—Eric de Place, policy director at the Sightline Institute, a progressive Seattle think tank, told The Oregonian newspaper there was no reason to think that other areas would experience such “luck” next time.

“We’re playing Russian roulette,” de Place said. “I think the industry is perfectly willing to put a gun to our heads and risk our lives for the sake of making money. It is abundantly clear this enterprise is unsafe, unsustainable and they don’t know how to manage it.”

Sitting next to his 7-year-old son as he spoke with the newspaper, de Place said he was in a “blind rage” about the fiery crash in Mosier. “It’s appalling that we’re allowing this to continue,” he said.

For his part, Appleton confessed the experience has changed his perspective on what should be allowed.

“I hope that this becomes death knell for this mode of shipping this cargo. I think it’s insane,” Appleton declared on Saturday. “I’ve been very hesitant to take a side up to now, but with this incident, and with all due respect to the wonderful people that I’ve met at Union Pacific, shareholder value doesn’t outweigh the lives and happiness of our community.”

Though oil-by-rail traffic in the region has been down in the region since it peaked in 2014, there are new proposals to increase traffic through the Columbia River Gorge, especially if those trying to build a large export terminal in Vancouver, Washington can defeat local opponents. On Sunday, Vancouver-based newspaper The Columbian reported that estimated financial costs of a “worse case scenario” train oil disaster in that town could be as high as $5 or $6 billion.

At the rally that took place in Hood River on Saturday, opponents to increased oil-by-rail operations say the still smoldering wreckage in Mosier is all the evidence they need to keep up their fight.

“I don’t see the benefit I’m getting in exchange for this risk,” Emily Reed, city council president in Mosier who attended the rally, told the Associated Press. “There is no safe way for these fossil fuel trains to come through our town.”

“This isn’t a one-off,” she added. “It’s happening in my town, but next time it’ll be somebody else’s town.”

In a statement, Columbia Riverkeepers, who organized Saturday’s rally, said, “This is a tragic moment that has lived in the minds of many community members for a number of years.  The escalation of oil trains in the Gorge and throughout the Pacific Northwest has been opposed by many city governments, faith communities, tribal councils and community organizations precisely for the reasons we are experiencing today as a result of the Mosier derailment. Health and air quality, water contamination risks, fire risks and community safety are all being jeopardized.”

Looking forward, the group said it will ask “President Obama and our federal elected leaders to support a ban on high risk oil train shipments through the Columbia Gorge and other U.S. communities. And we will call on Governor Brown, Governor Inslee, and federal leaders to deny proposed oil train terminals in the Pacific Northwest, proposals that would dramatically increase dangerous oil trains through our region.”