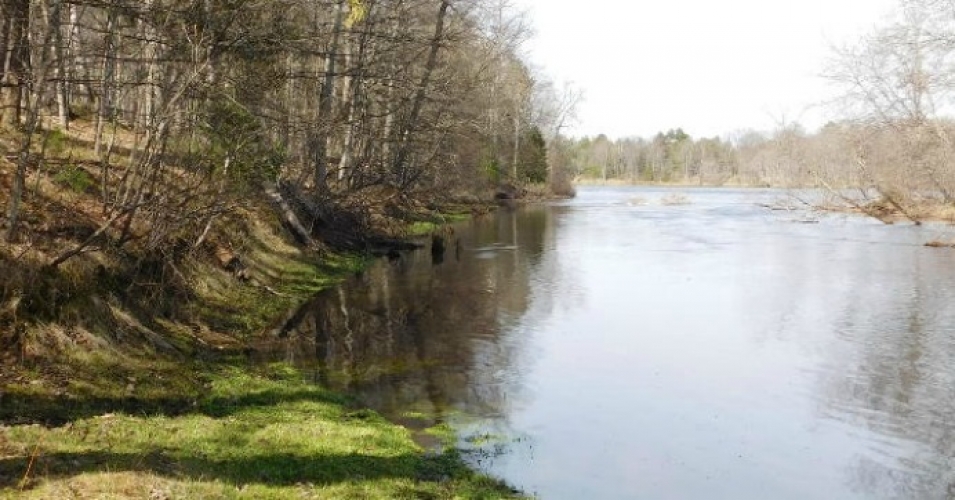 Proposed mine site along the Menominee River. (Credit: Brian Bienkowski)

The State of Michigan on Friday announced its intention to approve, over tribal protests, an open pit mine near burial and other culturally important sites in the Upper Peninsula.

The mine would provide an economic boost to the region and metals such as gold, zinc, copper and silver that fuel our tech- and gadget-driven lifestyle. But would come at the expense of land and water that is central to the existence of the Menominee Tribe of Wisconsin. The decision comes as Native Americans across the country are unifying to buck the trend of development on off-reservation land.

The mine, dubbed the Back Forty, straddles the Michigan-Wisconsin border and has been in the works for more than a decade. The mine would cover about 83 acres near the headwaters of the Menominee River. The company seeking the mine permit, Canada-based Aquila Resources Inc., estimates the mine will yield 532,000 ounces of gold, 721 million pounds of zinc, 74 millions pounds of copper, 4.6 million ounces of silver and 21 million pounds of lead—metals crucial for cell phones, computers, cars and other modern-day conveniences.

But within the broader footprint of the mining site are burial grounds and former raised garden beds from the Menominee tribe, who used to live in the region before an 1856 treaty forced them onto their current reservation, 60 miles southwest of the proposed mine site. The mouth of the Menominee River is the center of their creation story.

In response to the state’s proposed approval, tribal chairwoman Joan Delabreau said the tribe was “sickened.”

“The tribe has and will continue to fight to protect any land within our ancestral territory that contains the remains of our ancestors and our cultural resources,” she said in a statement.

In announcing the proposed approval just before the holiday weekend, state officials said Aquila’s application meets the state’s mining law requirements to protect people and the environment. But it’s not the final say: Aquila still needs the DEQ to sign off on its wetlands permit.

The tribe is not alone in opposition to the mine. Citizens near the river have expressed concern about pollution from mine tailings and from mining wastewater. Metals extracted from sulfide ores such as those found on the Back Forty can produce acid mine drainage. “My No. 1 concern is water,” said Jim Voss, a retired schoolteacher who, along with his wife, are the closest residents to the mine site.

Aquila’s vice president of U.S. operations, Cliff Nelson, said that lined pits and a 1,300 foot wall will ensure that wastewater doesn’t contaminate the river or groundwater. A water treatment plant will render water “cleaner than rainwater” before it’s discharged.

Aquila also points to the economic boost: An estimated 250 jobs and $20 million in yearly tax revenue for federal, state and local governments over the life of the mine.

There was no mention of the Menominee tribe’s concerns in the DEQ’s statement on the proposed approval.

“The federal agencies, charged with upholding trust responsibility to tribes, are not living up to their responsibilities through their inaction to protect our sacred and cultural resources,” Menominee tribal historic preservation officer David Grignon said in a statement.

The mine is part of a broader debate about development on or near sacred tribal sites. Over the past few months North Dakota’s Standing Rock Sioux tribe, along with other tribal allies, have protested the Dakota Access pipeline that would span four states, pass under the Missouri River a half mile upstream from the tribe’s reservation and impact burial grounds and other culturally important sites.

In Utah, tribes and conservation groups are pushing President Obama to approve the Bear’s Ear National Monument, a hallowed area for the area’s tribes. The 1.9 million acres in southeast Utah hold thousands of sites where ancestral Native Americans lived, which still hold significance for tribes such as the Navajo, Hopi, Zuni and Utes. The area has been fingered for potential oil and gas extraction and has suffered from looting and vandalism.

And the Back Forty comes on the heels of the controversial Eagle Mine in Michigan’s Upper Peninsula, which is just a four-hour drive to the north of the proposed Back Forty site. Eagle is an underground sulfide mine that the Keweenaw Bay Indian tribe fought for years, losing the battle in the end.

In addition to the pending wetland review, the Michigan DEQ will accept public comments on the mine decision, as well as the individual air and surface water permits, for the next two months. The department is required to make a final decision by December 1, 2016.

The Menominee tribe’s fight against the mine and the broader national struggle for off-reservation resource protection will be featured in EHN’s ongoing investigation Sacred Water.