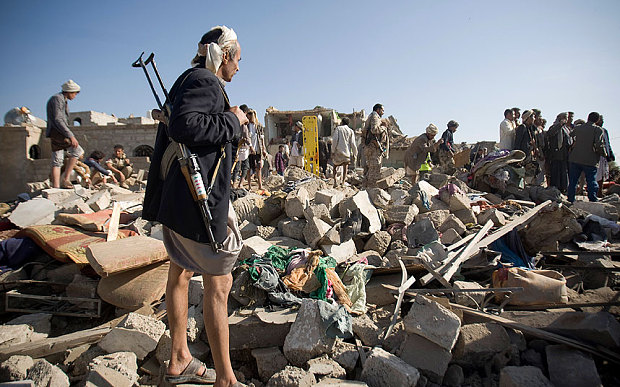 The U.S. officially entered war with Yemen late Wednesday, launching strikes on Houthis for the first time, puofficiallrportedly in retaliation for attempted missile attacks on American warships earlier this week.

An anonymous U.S. spokesperson said the strikes destroyed three radar installations used to target the USS Mason over the past four days. The American warship had been operating out of the Bab al-Mandeb waterway between Yemen and East Africa, the Guardian reports.

U.S. officials claimed to Reuters that there were “growing indications” the rebels or allied forces had carried out strikes on Sunday, which saw two coastal cruise missiles launched at the warship, but not reaching it. However, Houthi rebels have denied any involvement, stating that allegations otherwise from U.S. officials were pretext to “escalate aggression and cover up crimes committed against the Yemeni people.”

In addition to making the U.S. an official combatant in the war, the strikes further complicate a tense situation on the ground in Yemen, where the Saudi Arabia-led coalition bombed a funeral ceremony on Saturday, killing by some estimates at least 155 people. It prompted human rights advocates on Capitol Hill and beyond to implore the U.S. to stop supporting the Saudi campaign, although the Obama administration recently authorized a $1.13 billion arms sale to the Gulf kingdom.

The campaign began in March 2015 and according to recent figures has killed at least 6,500 people, more than half of them civilians, and injured 32,000. As the New York Times summed up on Thursday:

Despite skepticism in Washington about the wisdom of the campaign, the Obama administration threw its support behind the Saudis, in part because it needed support in Riyadh for the nuclear deal it was then negotiating with Iran, a bitter enemy of Saudi Arabia.

Human Rights Watch on Thursday declared the funeral bombing “an apparent war crime,” writing in a news brief, “[w]hile military personnel and civilian officials involved in the war effort were attending the ceremony, the clear presence of several hundred civilians strongly suggests that the attack was unlawfully disproportionate.”

Likewise, on Wednesday, even before the U.S. launched the missiles, Rep. Ted Lieu (D-Calif.) urged the administration to cut ties with Saudi Arabia over the more than 70 strikes the coalition has carried out in Yemen that he described as unlawful.

“It appears that either the Saudi coalition is intentionally targeting civilians or they are not distinguishing between civilians and military targets. Both would be war crimes,” Lieu wrote in a letter to U.S. Secretary of State John Kerry.

“Immediately stopping the aiding and abetting of the Saudi military coalition would not only help reduce the legal risk to U.S. officials, it would send a strong message to the world that the U.S. respects the law of war and basic human rights,” the letter continued. “As you know, the State Department has an entire office dedicated to preventing foreign entities from committing war crimes. The credibility of that office has been shredded by the U.S.-enabled airstrikes on civilians in Yemen.”

But as political professor and Middle East expert Christopher Davidson posited on Thursday, keeping the war going is exactly the point.

By launching the strikes on Wednesday, “the U.S. has made a direct, but very limited intervention to ensure that no one side is really able to get the upper hand in the country’s slow-burning conflict,” he said in a statement for the Institute for Public Accuracy. “[T]he longer the current Yemen conflict lasts, the longer the arms race will keep going, and the more dependent both Saudi and Iranian clients will be on support from their patrons.”