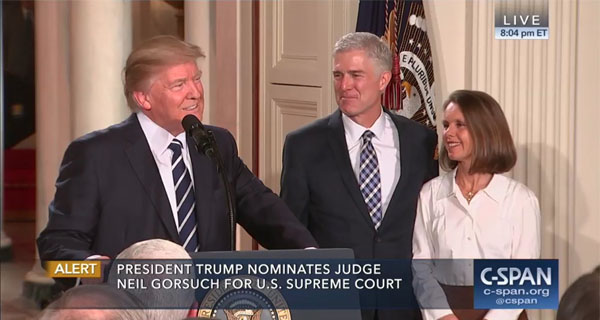 From June 2005 to August 2006, Gorsuch served as the principal deputy to the associate attorney general under former President George W. Bush.

Last week, the department turned over to the Judiciary Committee roughly 150,000 pages of documents related to Gorsuch’s tenure there—and as the New York Times reported Wednesday, they show Gorsuch was “at the center of both litigation and negotiations with Congress” over issues including detainee abuses, military commissions, warrantless surveillance, and the Bush administration’s broad claims of executive power. Read some examples here.

“References to those efforts may offer clues to Judge Gorsuch’s approach to the sort of national-security and executive power issues that rarely come before his appeals court but can be crucial at the Supreme Court,” wrote Times reporter Charlie Savage.

During the negotiations with Congress over the Detainee Treatment Act, Judge Gorsuch helped persuade lawmakers to weaken a provision that permitted a civilian appeals court to review decisions by military tribunals. The original draft let judges scrutinize whether a tribunal had “applied the correct standards,” but the revised one only let them look to see whether the tribunal had applied standards set by the Pentagon.

The change, “in response to our concerns,” Judge Gorsuch wrote, “reduces significantly the potential for judicial creativity.”

After reviewing some of the documents, Sen. Patrick J. Leahy (D-Vt.) told the Washington Post that “on areas of surveillance and torture, what I’ve seen so far, his views are a lot different than mine.”

“The information we’re learning about Neil Gorsuch’s time at the Department of Justice only underscores how deeply concerned Americans should be that this nominee won’t be a meaningful check on Donald Trump’s illegal and unconstitutional agenda.”
—Marge Baker, People for the American Way

“When Judge Gorsuch was working for the administration, at least based on the initial things I’ve looked at, he appears to be a cheerleader for President Bush’s views on executive powers,” Leahy added, declining to specify which documents he had seen.

“The specifics of Judge Gorsuch’s advice and role in these matters, as well as his views now, should be probed further,” wrote Just Security founding editor Jennifer Daskal on Thursday. “At age 49, Gorsuch would, if confirmed, be the youngest member of the Supreme Court, and thus likely to be there for a long time. He could end up being the decisive vote in a range of future cases that involve executive branch policies that push at, or cross, the line of legality—defended based on expansive claims of unreviewable executive authority in the arena of national security.”

In an effort to get more clarity on Gorsuch’s positions, ranking Judiciary Committee member Sen. Dianne Feinstein this week demanded Gorsuch turn over more information germane “to the Bush Administration’s anti-terrorism, intelligence, detention, interrogation, military, or related efforts in which you drafted or reviewed a legal filing.”

“Documents produced by the Justice Department demonstrate you had a leading role in litigation and strategy over executive power and national security matters that have not yet been identified to the committee,” she said in a letter on Tuesday, giving the nominee a deadline of 5:00pm on Thursday to respond.

Public interest group People for the American Way added its voice to the call.

“The information we’re learning about Neil Gorsuch’s time at the Department of Justice only underscores how deeply concerned Americans should be that this nominee won’t be a meaningful check on Donald Trump’s illegal and unconstitutional agenda,” said the group’s vice president, Marge Baker. “Neil Gorsuch played a key role in defending the torture and detention policies that have been rejected by the courts and by our country. Now Donald Trump is promising to reinstate torture programs and enact anti-Muslim policies that directly contradict our First Amendment freedoms. And he wants Neil Gorsuch to help him do it.

“[T]here’s a lot more we still need to know about Gorsuch’s time at the Department of Justice,” Baker added. “Just as the GOP is attempting to push through its disastrous healthcare legislation with a chaotic and irresponsible process, they’re trying to move Gorsuch’s nomination forward without putting all the facts on the table. That’s unacceptable, and senators on both sides of the aisle should demand that they get the information they need to fully evaluate this nominee.”

The nonpartisan watchdog group Fix the Courts has also filed a lawsuit in federal court after the DOJ failed to respond to its Freedom of Information Act request for Gorsuch’s records.

Speaking of what the department has released to the Senate committee, the group’s executive director Gabe Roth told the Washington Post: “The picture these documents paint is that from the outset of his agency tenure, Judge Gorsuch was intimately involved in a range of administration initiatives, from detainee treatment to surveillance to judicial nominations. I’m looking forward to the release of additional documents, whether in response to the senator or to our FOIA lawsuit.”