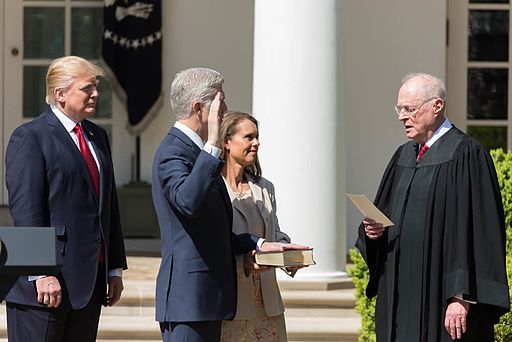 Legal experts immediately sounded alarm upon learning that Gorsuch is set to be the featured speaker at the event, which is hosted by the conservative group The Fund for American Studies.

“It’s a terrible signal for this group to be holding their meeting at the Trump International Hotel and for a Supreme Court justice to legitimate it by attending,” Stanford law professor Deborah L. Rhode told the New York Times.

New York University ethics expert Stephen Gillers agreed, saying in an interview with the Times: “At this highly divisive political moment, especially as many Trump decisions are likely soon to reach the court’s docket, one just days later, a healthy respect for public confidence in the court should have led Justice Gorsuch to demur.”

Other commentators and legal observers expressed similar concerns on social media, and MoveOn.org quickly began circulating a petition calling on Gorsuch to withdraw from the event.

Hmmm…. SCOTUS justice who might be asked to hear case related to Trump hotel will headline event at Trump hotel. https://t.co/YNr75E1W61

Neil Gorsuch absolutely should NOT headline an event at Trump Tower

In an indication of the many potential conflicts the September event raises, Richard Painter—vice chair of Citizens for Ethics and Responsibility in Washington (CREW)—declined to comment on the Times story because “the status of the hotel [is] at issue” in several pending lawsuits.

CREW, along with other groups and individuals, is suing President Donald Trump on the grounds that he has violated the Constitution’s foreign emoluments clause, which bars the president from receiving gifts from foreign governments and prohibits Trump from “receiving benefits from the federal and state governments apart from his congressionally approved compensation.”

The lawsuit was initially filed in January, just three days into Trump’s presidency, and it argues that the president has profited from foreign payments to his hotel.

CREW argued in a recent update that the violations have only continued to pile up.

“We would’ve liked to be dropping our case because the president got in line with the Constitution,” said Noah Bookbinder. “Instead, the violations we anticipated when we brought our case became much more concrete.”

By ignoring these concerns, Gorsuch is “legitimizing” both Trump’s “conflicts of interest” and the “hosting group’s attempt to curry favor,” argued Walter Shaub, the former head of the Office of Government Ethics.

In a statement on Friday, Nan Aron, president of Alliance for Justice, added: “Justice Gorsuch should have known better than to sign up as the headliner for an event that will line Donald Trump’s pockets in a way that is at best ethically sketchy, and at worst downright unconstitutional.”