“I still cannot believe the government refuses to drop this,” said Desiree Fairooz 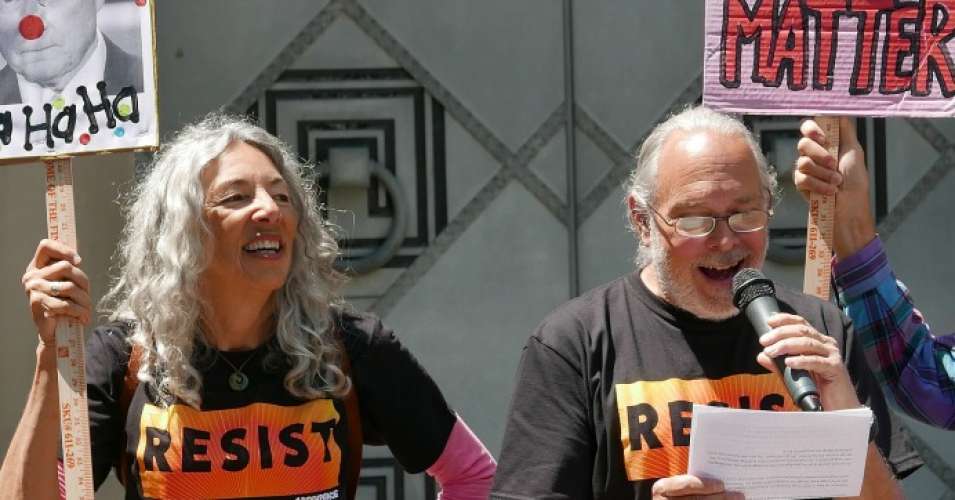 Desiree Fairooz (left), seen on May 10, 2017, just days after she was convicted of disorderly and disruptive conduct during Jeff Sessions’ confirmation hearing. (Photo: Susan Melkisethian/flickr/cc)

CODEPINK activist Desiree Fairooz, who was arrested after laughing during Attorney General Jeff Sessions‘ confirmation hearing, will face a second trial this fall after she rejected a plea deal on Friday.

“I still cannot believe the government refuses to drop this. Vindictive!” she wrote on Twitter, while CODEPINK called it “ridiculous.”

As Common Dreams reported, she was convicted in May of disorderly and disruptive conduct during the hearing. While Sen. Richard Shelby (R-Ala.) argued that Sessions’ record of “treating all Americans equally under the law is clear and well-documented,” Fairooz, who was in the hearing room, laughed. She held up a sign that read “Support Civil Rights; Stop Sessions” as she was placed under arrest and taken out of the room.

You can hear her laughter in video below, around the 1:20 mark:

Fairooz described the noise she made as “spontaneous. It was an immediate rejection of what I considered an outright lie or pure ignorance.” Civil liberties advocates have also strongly rejected such an characterization of Sessions’ record.

Her conviction was thrown out in July and a hearing set for Sept. 1. At the hearing, CNN reports: “According to court records, Fairooz rejected a deal offered by prosecutors that would have required her to plead guilty in exchange for a recommended sentence of time served.”

This time around, the government will have to be more careful if it wants the jury verdict to stand. Because they cannot argue that laughter was enough to sustain a conviction, government lawyers essentially have to concede to the jury that Officer Katherine Coronado, the rookie cop who approached Fairooz, made a mistake. They’ll have to argue that, even if the officer was wrong to arrest Fairooz, she didn’t have the right to loudly object to her treatment, or at least didn’t have the right to make political statements that briefly interrupted Senate proceedings.

In a May interview with Jezebel, Fairooz said, “I’m just an average citizen. I’m no spokesperson. I’m no paid protester. I am a retired children’s librarian, former teacher who is speaking for people like my former students and their families or those who are not able to do this. That if you do not stand up to the injustices that are being imposed on us—I mean, I see our democracy crumbling every day.”

“It was bad under Bush. It was definitely imperfect under Obama. And now every day, I ask myself, is it fascism now? And so if we don’t stand up while we still have some modicum of democracy, it’ll be too late. So if anything, I hope others feel inspired to do likewise,” she said.