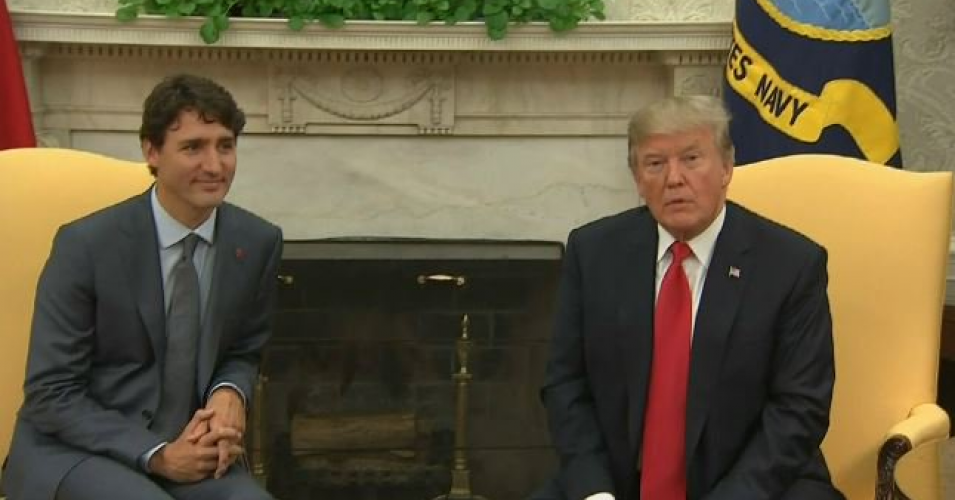 After an Oval Office meeting with Canadian prime minister Justin Trudeau, President Trump attacked NBC for its reporting on his comments about increasing the nation’s nuclear arsenal. (Photo: @RT_America/Twitter)

Free speech advocates and journalists spoke out against President Donald Trump’s latest attack on the news media on Wednesday after he suggested a “challenge” of NBC’s license.

Michael Copps, the former FCC commissioner who now serves as special advisor to the grassroots organization Common Cause, noted that while Trump isn’t legally able to carry out his threats, his attempts to intimidate the press are deeply disconcerting:

This madcap threat, if pursued, would be blatant and unacceptable intervention in the decisions of an independent agency. The law does not countenance such interference. President Trump might be happier as emperor, but I think the American people would strip him of his clothes on this issue. Additionally, it’s not just NBC stations that will find this threat chilling, but also smaller independent stations around the country who might lack the resources to fight back.

Trump made the comment about NBC’s license after the network published a report saying the president shocked his national security team earlier this year by requesting a “tenfold” increase in the nation’s nuclear weapons arsenal. Trump denied the report on Twitter, and in a televised Oval Office appearance he attacked NBC for its reliance on anonymous sources. “It is frankly disgusting the press is able to write whatever it wants to write,” Trump told reporters.

Fake @NBCNews made up a story that I wanted a “tenfold” increase in our U.S. nuclear arsenal. Pure fiction, made up to demean. NBC = CNN!

With all of the Fake News coming out of NBC and the Networks, at what point is it appropriate to challenge their License? Bad for country!

Even if the president is merely making another round of social-media threats, the fact that he is now mingling those threats with talk of formal action to punish a network that does not meet with his approval is deeply troubling.

There is no question that the message Trump is sending to the rest of the world is a dangerous one, as the Committee to Protect Journalists reminds us. “Trump’s assertion that @NBC’s license could be challenged emboldens other gov’ts to embrace authoritarian tendencies,” notes the CPJ.

The message that Trump is sending at home is also unsettling. Congressman Keith Ellison, D-Minnesota, described the president’s expression of disgust with those who write critically about him as the “words of an authoritarian.”

Wednesday’s comments are far from the first time that the Trump administration has questioned the news media’s right to exist in its current form. At a rally in August, the president told a room full of his supporters in Phoenix that most journalists are “really, really dishonest people, and they’re bad people” who “don’t like our country.”

Earlier that month, Attorney General Jeff Sessions announced the Justice Department was reviewing its policy on media subpoenas, potentially making it easier for courts to force journalists to testify about confidential sources.

And in March, Trump suggested that libel laws should be changed, in a tweet criticizing the New York Times which he said had “gotten me wrong for two solid years.”

On Twitter, the ACLU and other press freedom advocates denounced the president’s latest attack on the media.

Frankly, @realDonaldTrump, it is the First Amendment you have a problem with. https://t.co/Cnl2pYhJf1

Trump’s threats toward media outlets that are critical of him is an attack on the First Amendment and the behavior of a dictator pic.twitter.com/stoOjlVQBD

Trump thinks the 1st Amendment is there to protect HIM from the free press.

It’s the other way around, dipshit.https://t.co/5kgRaTAQ2N

The NBC threat is a reminder that if Trump were competent and powerful enough to be an authoritarian, he would be one.