“Trump wants to sell Saudi and the UAE a bunch more bombs to keep killing civilians in Yemen. Congress must stop this sale.” 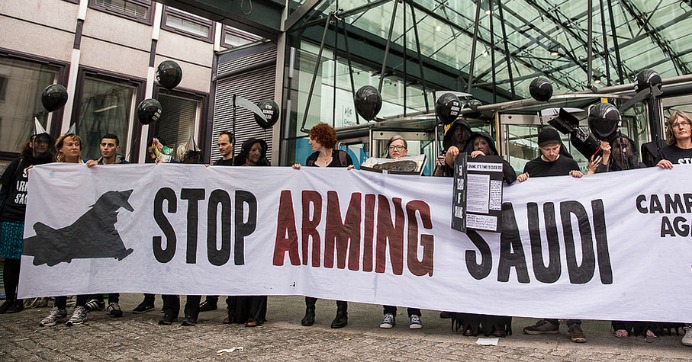 Further demonstrating the willingness of the U.S. to reward and perpetuate the war crimes of its allies, the Trump administration is reportedly moving ahead with a multi-billion-dollar sale of so-called “smart bombs” to Saudi Arabia just weeks after the U.S.-backed Saudi-led coalition bombed a wedding in Yemen, killing more than 20 people.

First reported by The Intercept‘s Alex Emmons on Friday, the precise details of the deal—which also includes weapons sales to the United Arab Emirates—are not entirely unclear as it is in the preliminary stages, “but it is said to include tens of thousands of precision-guided munitions from Raytheon,” the company that helped produce weaponry used in the deadly wedding airstrike last month.

“The sale in question is a direct commercial transaction between Raytheon and the Gulf countries, which does not require the government to publicly announce the sale at the time of congressional notification,” Emmons reported. “That means it will be up to senators to decide how many of the details to make public.”

The reported weapons deal—which could be sent to Congress as early as next week—comes as some American lawmakers are increasingly calling attention to U.S. complicity in Saudi Arabia’s vicious, years-long assault on Yemen.

“The Saudi-led intervention in Yemen, with U.S. support, has been a humanitarian disaster,” Sanders said after his resolution was voted down with the help of 10 Democrats.

Responding to reports of the “smart bomb” sale on Friday, Win Without War policy director Kate Kizer called on Congress to intervene and prevent the sale from going through:

Trump wants to sell #Saudi & the #UAE a bunch more bombs to keep killing civilians in #Yemen. Congress must stop this sale. https://t.co/4IVyhyVSVu

According to the United Nations, “April was the deadliest month for civilians in Yemen so far this year, with a sharp increase in casualties.”