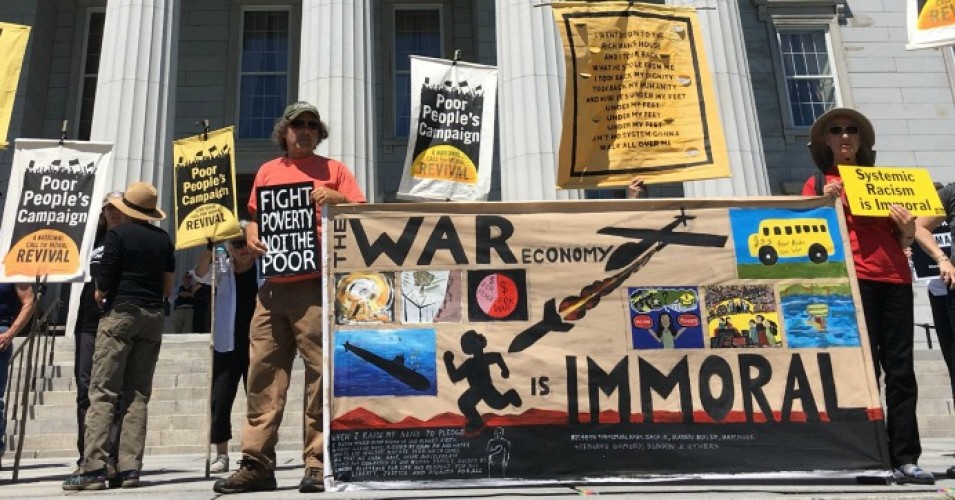 Hoisting signs that read “The War Economy Is Immoral” and “Ban Killer Drones,” demonstrators gathered at the capitol buildings of New York, North Carolina, Tennessee, and several other states to denounce a militaristic system that profits “every time a bomb is dropped on innocent people.”

As of this writing, hundreds have been arrested and many more are facing arrest as they gather outside of Senate Majority Leader Mitch McConnell’s (R-Ky.) office in Washington, D.C.

HAPPENING NOW: Dozens of Missourians have shut down the state capitol with the #PoorPeoplesCampaign for the 3rd time to call for an end to the war economy. We’re fighting for our lives. And we all have a right to live. #FightFor15 pic.twitter.com/nKLSZFhAJf

“If you want to thank me for my service, work for peace!” #PoorPeoplesCampaign pic.twitter.com/ImoBMmE2CM

“We have a long history of wars against other people, mostly people of color, around the world…it’s time we stopped calling it the defense department and started calling it what it is: the department of war.” -John Braxton, Vietnam War draft resister #PoorPeoplesCampaign pic.twitter.com/nVrjcRMlDk

As Common Dreams reported, the Poor People’s Campaign unveiled a detailed series of demands last month ahead of the launch of its 40 days of action in more than 30 states across the country.