“ICE has proved to be a threat to our liberty and way of life, and should be abolished,” said group member behind the protest 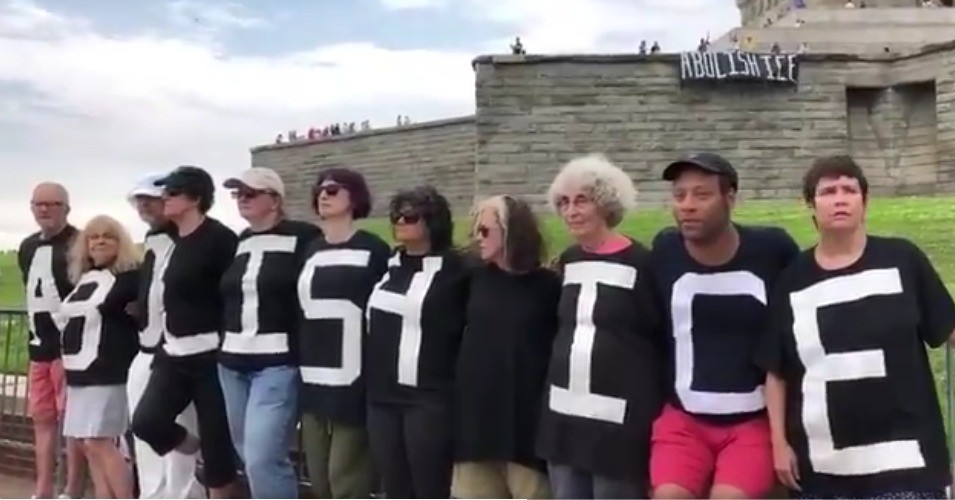 “Reflecting the sentiments of Saturday’s nationwide End Family Separation protests, members of Rise and Resist staged a visual protest at the Statue of Liberty on Independence Day. An ABOLISH ICE banner was hung from the statue, and activists spelled out the same message on their shirts. Dozens of tourists cheered on the activists, and the protest was broadcast via live stream over social media.” (Photo: Screenshot/Rise & Resist)

Protesters taking a stand against the Trump administration’s cruel and inhumane immigration and border policies were arrested at the Statue of Liberty in New York City on Wednesday, the Fourth of July—a potent and symbolic day to remind Americans of the essential role that those who emigrated and sought shelter in the United States have played in the nation’s history.

While one group was arrested after dropping a banner that read “Abolish ICE,” a separate individual scaled the statue while police attempted desperately to end the dramatic action.

Rise and Resist is at the Statue of Liberty demanding Trump and the GOP #AbolishICE, reunite families now, halt deportations, and end detention as a deterrent. #EndFamilySeparation #AbolishCBP #FreeOurFuture #HereToStay pic.twitter.com/v3UbnFjI5w

HAPPENING NOW: Police respond after woman scales base of Statue of Liberty on Independence Day. https://t.co/C7R4cMwGdY

In their statement, the group said their action on Wednesday was in solidarity with nationwide protests last weekend against Trump’s child detention and family separation policies, but was also driven by the following realities:

“ICE has proved to be a threat to our liberty and way of life, and should be abolished,” said Leon Kirschner, Rise and Resist member. “They go after the most vulnerable among us, acting without due process to detain people. For-profit companies are making money off family separation. This has to stop now.”

The group said via their Twitter stream  that an individual who later climbed onto the lower portion of the iconic Lady of Liberty had no affiliation with their group:

The Climber on the Statue of Liberty has no connection to our #abolishice action earlier today. @NYDailyNews @ABC

Nonetheless, the person who scaled further up the base of the statue spurred the evacuation of the National Park in which the statue sits and stirred breaking news reports on major networks:

Someone is apparently trying to climb the Statue of Liberty right now https://t.co/4IPwCewWgS