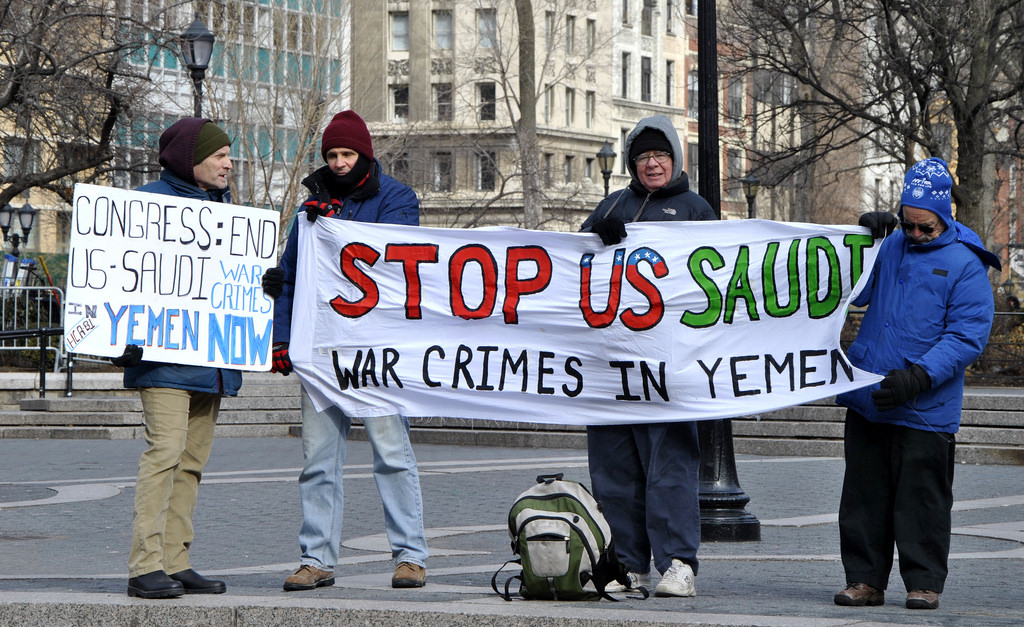 Commending the legislators’ resolution plans, Paul Kawika Martin of Peace Action pointed out that “Saudi Arabia and the United Arab Emirates continue to show their disregard for the nearly 18 million Yemeni civilians struggling to survive by conducting military attacks on ports, water supplies, and critical infrastructure.”

“The U.S. must stop aiding those that deliberately conduct illegal attacks on weddings, hospitals, and children in school buses,” Martin declared, calling on the government to “stop its complicity in what the U.N. last week confirmed are war crimes.”

Late last month, the U.N. released a report detailing not only the bombing campaigns that have killed civilians but also how the coalition has imposed air and naval blockades that have prevented the delivery of humanitarian aid. The report concluded that the coalition likely has “perpetrated, and continue to perpetrate, violations and crimes under international law.”

I will introduce a War Powers Resolution to withdraw U.S. forces from the war in Yemen. It’s long past time Congress decided on whether or not the United States makes war on the poorest country in the Middle East.https://t.co/vW4BoQzn9s

“We must take action to end U.S. participation in this catastrophic war in Yemen and work to bring about a peaceful conclusion to this conflict,” Khanna proclaimed in a statement about the privileged resolution, which will be introduced this month.

“On August 9, 40 Yemeni children were killed by a U.S.-supplied bomb used in a Saudi airstrike,” he noted. “For every Yemeni civilian killed in an airstrike, countless more perish from hunger and disease triggered and sustained by the war. The Saudi-led coalition, and all parties involved, must be held accountable for their actions contributing to this ongoing crisis.”

After the bus bombing, coalition forces killed at least 26 more children and four women in an airstrike on the port city of Hodeidah on August 23—which came a day after the Senate rejected a measure from Sen. Chris Murphy (D-Conn.) that would have “cut off United States’ support for the Saudi Arabia-led coalition’s war in Yemen until the Secretary of Defense certified that the coalition’s air campaign is not violating international law and U.S. policy related to the protection of civilians.”

Murphy has been one of the Senate’s fiercest critics of U.S. involvement in the war. Murphy, joined by Sens. Bernie Sanders (I-Vt.) and Mike Lee (R-Utah), spearheaded a resolution in March that would have cut off American military support for the coalition, but 45 Republicans and 10 Democrats voted it down.

The announcement of Khanna’s resolution came as the first peace talks in two years were scheduled to start in Geneva on Thursday, though Reuters reported that the coalition’s air blockade has prevented the Houthi delegation from flying out of Sana’a. Yemen’s foreign minister—representing the government of President Abd-Rabbu Mansour Hadi, which is backed by the Saudi-led coalition—is threatening to leave on Friday if the Houthis do not arrive soon.

Meanwhile, in D.C., Gabbard took to the House floor to demand an end to American involvement in the war. “For too long, the United States has turned a blind eye to the atrocities being committed against civilians in Yemen by the Saudi-U.S. coalition,” she said. “Enough is enough. The U.S. must end its support for Saudi Arabia, and stop waging interventionist wars that increase destruction, death, and suffering around the world, drain our resources here at home, and threaten our own national security.”