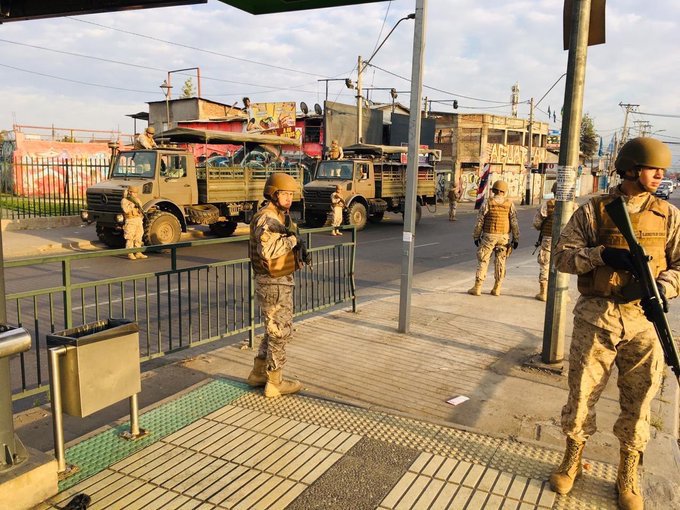 The country’s billionaire rightwing President Sebastián Piñera announced late Saturday that he was suspending a planned 4 percent increase in subway fares. That fare hike had prompted hundreds of young people on Monday to jump metro turnstiles and triggered protests in other cities in the country. But that may not have been the only catalyst. As The Guardian noted, the “latest protests follow grievances over the cost of living, specifically the costs of healthcare, education, and public services.”

Fires continued to burn and looters were seen in flashpoints around the city of six million people where earlier police and military clashed with protesters. There was also significant unrest in the port city of Valparaiso, seat of Chile’s Congress, where the government also declared military rule late on Saturday, and in the southern city of Concepcion.

“The center-right Pinera said he would invoke a special state security law to prosecute the ‘criminals’ responsible for the city-wide damage,” Reuters reported.

According to Santiago Mayor Karla Rubilar Barahona, two people died from a fire in a supermarket in the San Bernardo area of the capital and a third person died after being taken to the hospital.

In addition to the curfew and state emergency, the government responded to the unrest by dispatching the military to city streets.

It marks the first time the army marched through the streets of Santiago, AP noted, since  1990, when the brutal dictatorship of General Augusto Pinochet, who ousted Salvador Allende in a U.S.-backed coup, ended.

This is so awful. The military is in the street in Chile to repress protests against increased public transport fees. The echoes of images from 1973 are surreal; the military is nothing if not consistent as an enforcer of neoliberalization https://t.co/qOgKSQ5LtK

Another user shared video of soldiers in the city of Valparaiso: