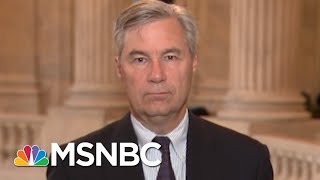 Sen. Bernie Sanders (I-Vt.), the ranking member of the Senate Budget Committee and a 2020 Democratic presidential candidate, issued a statement last week opposing the legislation and warning it “could be used by Republicans to unilaterally cut programs like Medicare, Medicaid, and nutrition assistance—all supposedly to reduce the deficit.”

“This new proposed process comes less than two years after Republicans on this Committee showed no hesitation in adding $2 trillion to the deficit in order to pass the Trump tax cuts for the wealthiest families and the most profitable corporations in America,” said Sanders.

As The American Prospect‘s David Dayen noted Thursday, passage of S.2765 would severely hamstring Sanders’ ability to implement his agenda should he win the White House in 2020.

“If a Democrat wants to extend free public college to all Americans, or move toward a universal healthcare system, or amass resources to fight the climate crisis,” Dayen wrote, “they’re going to run into the deficit scolds, the ‘No, We Can’t’ brigade. Republicans like Enzi want to build that ‘No, We Can’t’ presumption into the budget process itself. It makes no sense for Democrats to help them.”

One priority of a Sanders or Warren White House absolutely must be politically crushing the deficit scolds within the Democratic Party. https://t.co/sbs0HIhmEO

For the most part, cuts would have to come out of mandatory programs, like health spending and nutrition assistance for the poor. (Social Security is protected from reconciliation and could not be cut.)…

[T]he past three budget resolutions passed by Congress would have, under this bill, forced automatic reconciliation deficit cuts with a staggering total of $9.5 trillion.

In an analysis of S.2765 last week, Richard Kogan and Joel Friedman of the Center on Budget and Policy Priorities wrote that the bill amounts to “automatic austerity” that could “drive harmful budget cuts” and severely hamper the nation’s ability to respond to an economic downturn.

“The question of what’s sound budget policy should not be driven by a presumption that austerity is always the right answer,” Kogan and Friedman wrote.

Democrats’ totally misguided views about the budget deficit hamstrung the national economy during Obama’s presidency and threaten to undermine any hope of a meaningful legislative agenda in 2021. https://t.co/FNDwQEbppI

The vote to advance S.2765 out of the Senate Budget Committee came after House Speaker Nancy Pelosi (D-Calif.) said Democrats must commit to so-called “pay-go” rules, which require all new spending to be offset with budget cuts or tax increases.

Progressives have warned that adherence to conservative pay-go rules would completely undermine any possibility of Medicare for All, a Green New Deal, and other ambitious policy goals.

“Any left-wing president will have to deal with the Pelosi problem: the existence of powerful Democrats who are too wedded to big money to accept an ambitious program,” The Nation‘s Jeet Heer wrote last week. “Defeating the Republicans will be the easy part. The real challenge will be overriding Pelosi’s veto.”