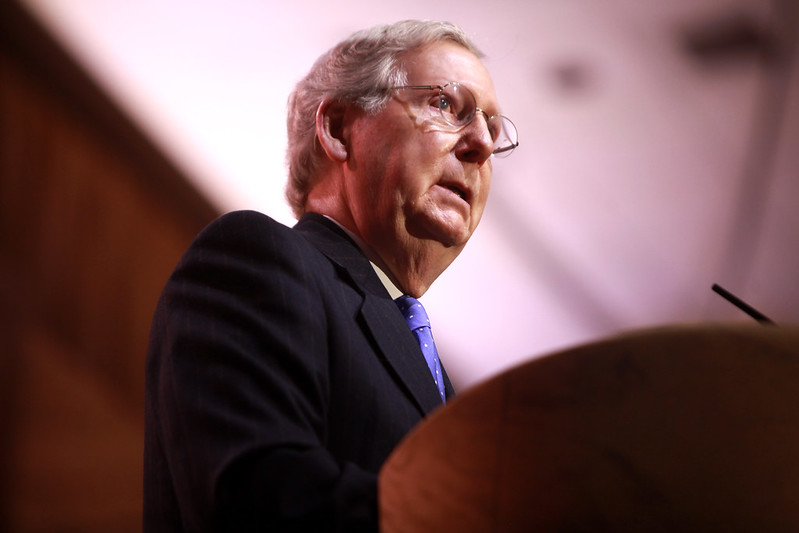 Vanita Gupta, president and CEO of the Leadership Conference on Civil and Human Rights, noted on Twitter that the latest confirmations came four months to the day after the Democrat-controlled House passed the Heroes Act, a $3 trillion coronavirus relief package that McConnell dismissed as an “unserious liberal wish list” and blocked from receiving a vote in the Senate.

“Everyone in America should be outraged that this is how Mitch McConnell is spending the Senate’s time amid a pandemic,” tweeted Gupta.

In a separate tweet Wednesday morning, Gupta urged the U.S. public to “pay attention” as McConnell and Trump’s court takeover proceeds apace amid the ongoing coronavirus crisis and resulting economic collapse—to which Senate Republicans have responded by putting forth legislation decried as piecemeal and wholly inadequate.

“As McConnell blocks the Heroes Act, the George Floyd Justice in Policing Act, election funding, and dozens of civil rights bills, his priority today (amid the pandemic) will be confirming three more Trump judges after confirming three yesterday,” said Gupta. “It’s an outrage.”

While Senate Democrats don’t have the numbers to block Trump’s judicial nominees, few even bothered to object Wednesday to the confirmations of John Holcomb, Stanley Blumenfeld, and Mark Scarsi to lifetime positions on the U.S. District Court for the Central District of California. Just 12 Democratic senators voted against Holcomb and Scarsi, and only four voted against Blumenfeld.

TODAY: The Senate is voting on Illinois district court nominees David Dugan and Stephen McGlynn, who have both worked against reproductive freedom.

The confirmations came days after major court decisions laid bare the real-world consequences of Trump and McConnell’s takeover of the U.S. judiciary, which will impact key areas of American society—from climate policy to voting rights—for decades to come.

Last Friday, as Common Dreams reported, the powerful U.S. Court of Appeals for the 11th Circuit upheld a Florida requirement that state residents with past felony convictions pay off all court fines and fees before they are allowed to register to vote—a ruling made possible by Trump’s appointees.

“The only reason it was upheld was because Donald Trump flipped the 11th Circuit with five Trump judges,” Mother Jones journalist Ari Berman told Democracy Now! on Tuesday. “And this is why Mitch McConnell in the Republican Senate is so intent on confirming judges and doing nothing else. This week, McConnell is going to confirm eight more judges to the federal bench, but they’re not doing anything else to help the American people.”

Late Sunday, the U.S. Court of Appeals for the Ninth Circuit—which Trump also flipped with right-wing judges—upheld the White House’s push to end “temporary protected status” (TPS) for hundreds of thousands of immigrants from El Salvador, Haiti, Nicaragua, and Sudan.

“Without Congressional action, this will lead to devastating moral and economic consequences not just for TPS holders but for their families, communities, and for the entire country,” Peniel Ibe, policy engagement coordinator for the American Friends Service Committee, warned in response to the ruling.