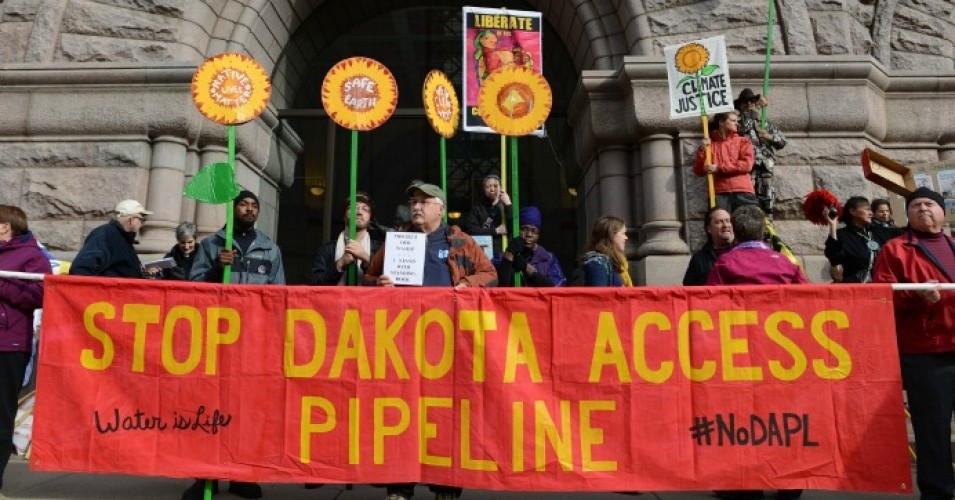 The run began shortly after 8am CST from a drill pad in Timber Lake, South Dakota—where the youth braved a wind chill of -26°F (-32°C)—and will end at the Oceti Sakowin Camp site, the center of heated resistance to the pipeline in 2016.

Standing Rock youth are sharing a live stream of the event.

“In 2016 a group of us youth from the Standing Rock and Cheyenne River Nations had the courage and were brave enough to stand up to the Dakota Access Pipeline (DAPL) that was going to cross our lands, threatening not only our drinking water supply but the land we have called home for generations. Millions of people from all walks of life stood with Standing Rock,” Annalee Rain Yellowhammer, Standing Rock Sioux Youth Council vice president, said in statement last week announcing the run.

“Mr. President Joe Biden,” she said, “you have the opportunity to be brave and take courage; shut down the Dakota Access Pipeline.”

The group is encouraging people to show support by taking actions Tuesday including making “some noise on social media” and calling the White House to pressure Biden to shut down the pipeline, which is operating without a federal permit.

“They are running because of one simple fact,” Dallas Goldtooth of the Indigenous Environmental Network wrote in a Wednesday email to supporters. “DAPL IS AN ILLEGAL PIPELINE.”

That legality is set to come under further legal scrutiny at a hearing Thursday.

Last month, a federal appeals court sided with the Standing Rock Sioux Tribe by upholding a lower court’s ruling that the U.S. Army Corps of Engineers (USACE) violated federal law in granting an easement for DAPL to cross a federal reservoir along the Missouri River.

U.S. District Judge James Boasberg has set a status hearing for Feb. 10 to discuss the impact of [the] opinion by the D.C. Circuit of the U.S. Court of Appeals that upheld Boasberg’s ruling ordering the Corps to conduct a full environmental impact review. Opponents of the pipeline want it shut down immediately.

Boasberg said in his one-sentence order that the Corps needs to show how it “expects to proceed” without a federal permit granting easement for the $3.8 billion, 1,172-mile (1,886 kilometer) pipeline to cross beneath Lake Oahe, a reservoir along the Missouri River, which is maintained by the Corps.

The Standing Rock youth stress that Biden has the power to end the pipeline, writing on Facebook February 4:

On Tuesday, February 9th 2021, we, the youth From the Standing Rock and Cheyenne River Sioux Nations

Are going to run to the Cannonball River

The site of our resistance 4 1/2 years ago The Dakota Access Pipeline is currently operating without a legal federal permit. President Joe Biden wants to be seen as a climate president

But he cannot claim that title until he stops this pipeline

And others like it, like Line 3. We ask the world to join us as we run again

Record yourself running, wherever you are, in solidarity

And make as much noise as you can on social media

To end this injustice

Goldtooth, in his email, echoed that message, writing that “oil is still flowing and the only person who can stop it right now is Joe Biden.”

“In order for us to Build Back Better, we must #BuildBackFossilFree,” he said.

Resistance to the fossil fuel projected was amplified last week when a group of five Democratic lawmakers sent a letter to Biden writing, in part: “By shutting down this illegal pipeline, you can continue to show your administration values the environment and the rights of Indigenous communities more than the profits of outdated fossil fuel industries. This is a critical step towards righting the wrongs of the past and setting our nation on a path of environmental, climate, and social justice.”

“With your leadership, we have a momentous opportunity to protect our water and respect our environmental laws and the rights of Indigenous people,” the letter states. “This is our moment.”