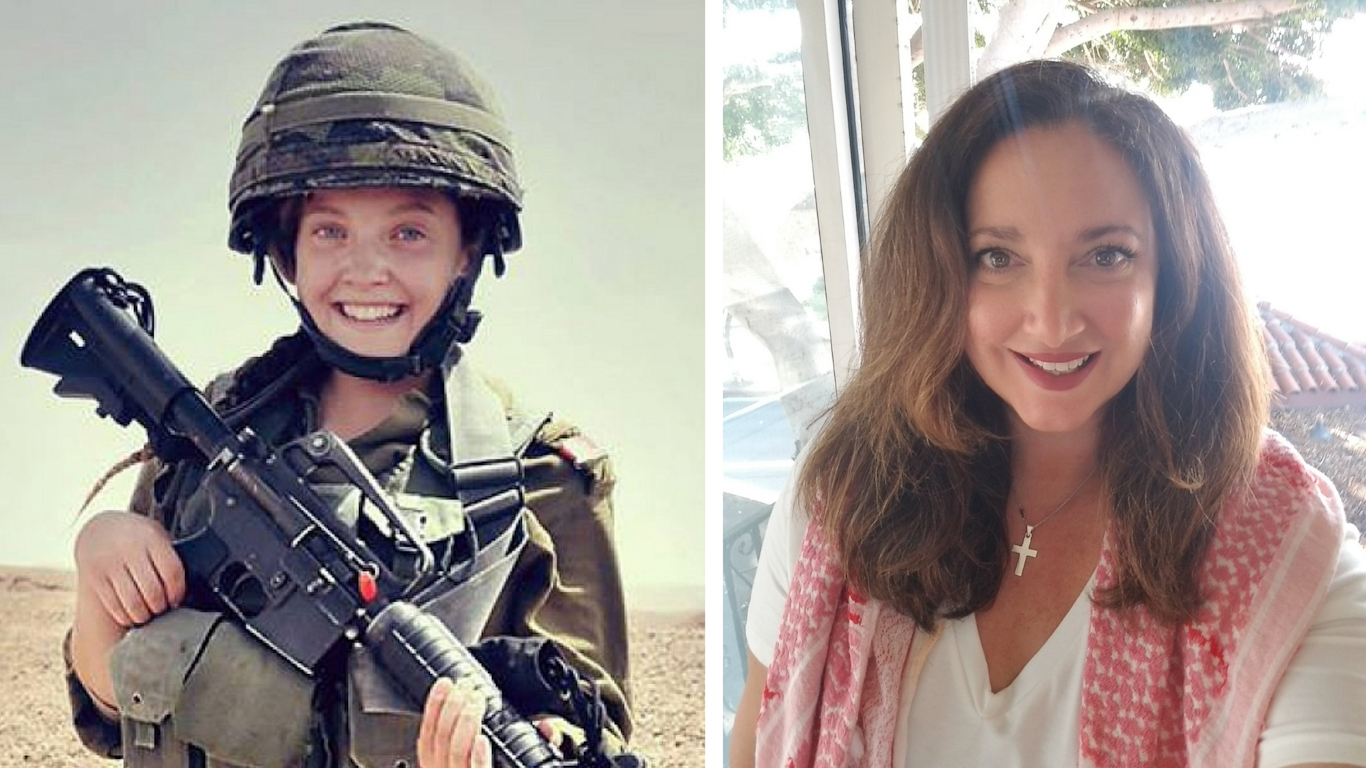 Bizarrely, Rumshiskaya was also attempting to convince the California court to try Nafal under Israeli law. The attempt backfired, however, as Orange County Superior Court Judge Craig Griffin rejected the suit, even ordering Rumshiskaya to pay Nafal’s legal costs under anti-SLAPP laws, effectively deeming it an attempt to intimidate Nafal into silence.

Nafal moved to the U.S. as an eight-year-old and was relatively apolitical until she saw images of the destruction caused by Operation Protective Edge, the 2014 Israeli assault on Gaza that cost the lives of more than two thousand people. Since then, she has gained an online following and joined a number of pro-Palestinian organizations, including New Generation for Palestine. The post that triggered the lawsuit can be seen below. 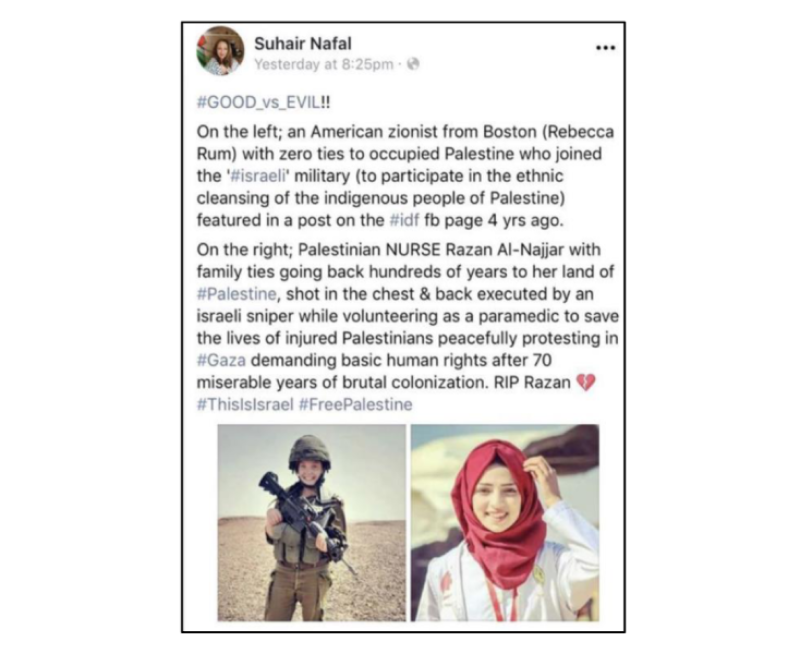 While the post makes no connection between Rumshiskaya and al-Najjar’s murder, other, copycat posts did, explicitly claiming Rumshiskaya was the nurse’s killer. Rumshiskaya’s complaint states she was inundated with hateful and violent messages as a result. But it remains unclear why she sued Nafal and not others who did make demonstrably false accusations.

“Not going to let them silence me”

Rumshiskaya is a Jewish American from Brookline, Massachusetts. In 2012, she decided to emigrate to Israel and join the IDF. Not content with a non-combat role she had been assigned, she transferred to a combat intelligence unit. The IDF used images of her in its promotions, which is how she came to Nafal’s attention. Rumshiskaya left the military in 2015, long before al-Najjar was killed. Her lawsuit describes Nafal as an “extremist” who “viciously defamed” her, and the Great March of Return as a Hamas-sponsored riot filled with terrorists using civilians as human shields. 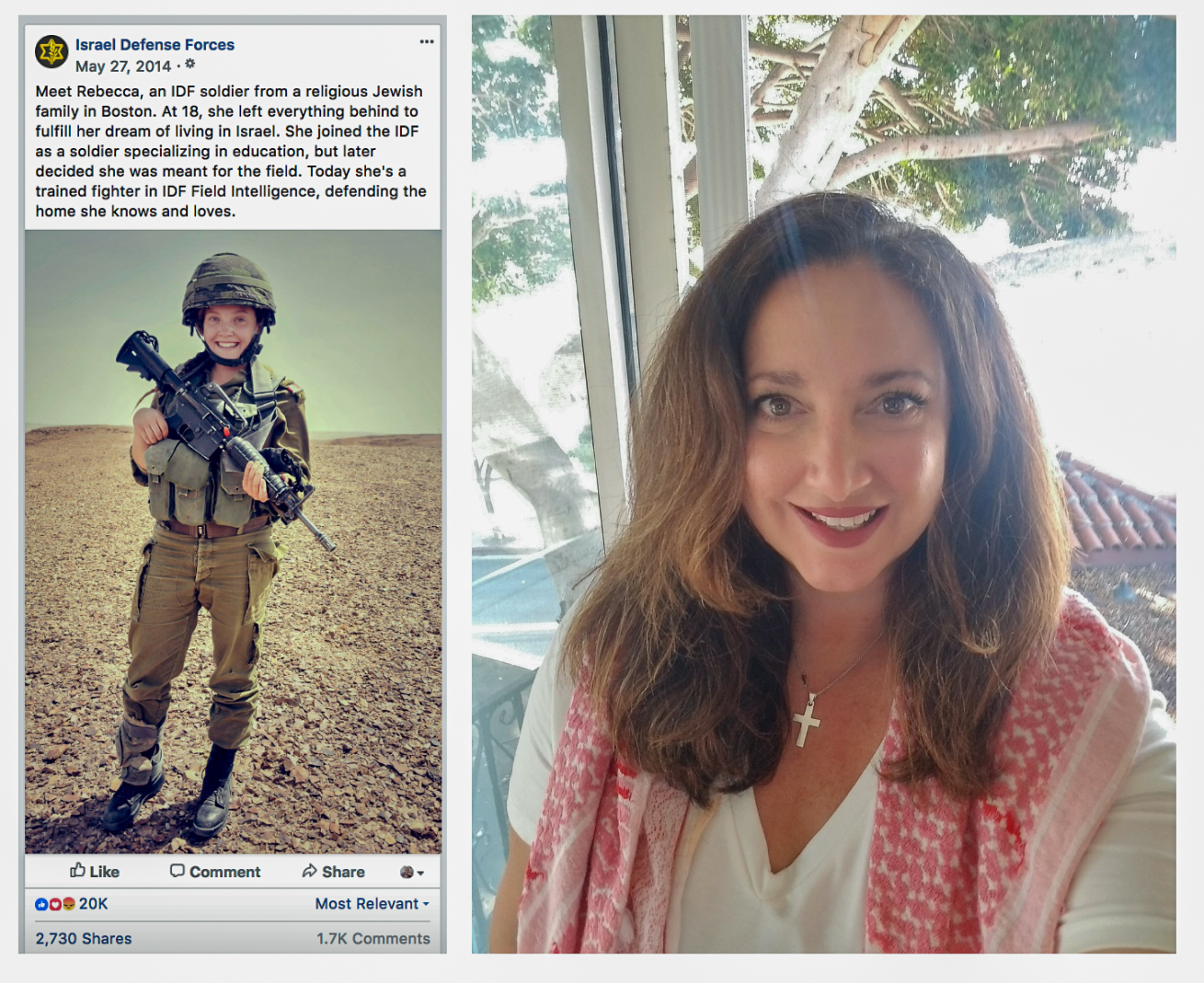 This conflicts with reports from human rights organizations, which describe the events as a demonstration, pinning the blame for the deaths on Israeli forces and noting that 70 of the 183 Palestinians killed were shot in the head. Seventy-eight journalists and medics were also shot. No Israelis were killed. “Nothing was carried out uncontrolled; everything was accurate and measured, and we know where every bullet landed,” the IDF stated. There was no evidence of human shields being used, although the IDF have used Palestinian children as such in the past.

“To be honest, I was in disbelief,” Nafal said, when first learning about the accusations, “I was stunned by their audacity… But truth be told, I sort of saw it coming. I knew the day would come where I was going to be pursued by them, based on my visibility on social media.” Nafal rejects the characterization of her as an extremist, telling MintPress, “If extremist political ideology means advocating on behalf of people who are occupied, oppressed, starved, and killed with impunity by colonialist occupiers who justify their violence based on a claim of their own religious supremacy then yes. I’m a extremist.”

Nafal told MintPress that she was determined not to be intimidated by the news:

“I had no choice but to continue what I was doing. I was not going to let them silence me. I continue to post like I’d always posted. I did not shy away, for one minute. And I will continue to share news of what is happening. And I am going to continue doing what I am doing. If anything, I am going to do more of it.”

Perhaps the strangest thing about the case was that the plaintiff’s team attempted to convince the Orange County court to apply Israeli law to the case between a Bostonian and a Californian. “The pleadings they filed make it clear this was all about Israeli interests, although they used Rebecca as the anchor for the lawsuit,” said Haytham Faraj, Nafal’s attorney.

Faraj told MintPress that any future attempts to silence criticism of Israel have been dealt a serious blow by the ruling, noting the fundamental disconnect between Israeli law and the First Amendment:

“What this judge brilliantly uncovered is that Israeli law is inherently inconsistent with American values. The truth is always a defense to defamation virtually the world over in democracies — except in Israel, where it is not a defense unless it is in the state’s interests… So if they do try to [pursue] other challenges, they will be unsuccessful.”

MintPress spoke via email to Rumshiskaya’s attorney, Michael Weiser, who expressed his disappointment with the decision. Weiser disputes Faraj’s reading of events, stating that the case was “dismissed on procedural grounds and the merits of what happened were never addressed.”

If Nafal had lost the case, she would have been required to pay the plaintiff $6 million in damages, which she does not have. Because of this, all her property and possessions and even future earnings could be taken or garnished. Furthermore, interest in these cases accrues in California at 10% per year, meaning that she would have been destined for a life of poverty. Fortunately for her, Judge Griffin dismissed the case, even ordering Rumshiskaya to pay her defense costs. Faraj saw this case as much larger than just Nafal:

This is a lawsuit that attempted to establish precedent in the U.S. for exercising Israeli law against criticism of Israel and Israeli agents. It is nothing but that. She could have sued Suhair under U.S. law within the few weeks that followed the post when there was the most amount of activity and she was, presumably, most affected by it. But this is not just a lawsuit by Rebecca, this is a lawsuit by an enterprise that seeks to silence anyone who would dare criticize Israel.”

The legal nature of criticism of Israel in the United States is in limbo. “Anti-Zionism is anti-Semitism” outgoing Secretary of State Mike Pompeo flatly stated in January, adding that BDS (Boycott Divestment and Sanctions, the practice of refusing to economically cooperate with Israel until it retreats from the Occupied Territories) is a manifestation of anti-Jewish racism.

Currently, the majority of American states require those receiving public funds (such as state employees) to sign pledges not to practice BDS on pain of termination. A number of Texas employees have lost their jobs after refusing to sign. Last year, a Georgia university also shut down a media literacy conference after journalist Abby Martin refused to sign the pledge. Martin is currently suing the state.

In 2019, the U.S. Department of Education ordered both Duke and the University of North Carolina at Chapel Hill to alter their joint Middle Eastern Studies programs, as it had determined they were presenting Israel in too negative a light. Henry Reichman, chair of the American Association of University Professors’ Committee on Academic Freedom and Tenure described the Trump administration’s interference as a “chillingly inappropriate political intrusion into curricular decisions best made by faculty.”

“BDS is one of the most important non-violent tools of resistance we have. And it is working. And that is precisely why they are investing and rallying around to try to shut it down. It is probably their biggest threat, in my opinion, along with social media. They are being exposed.”

The Biden administration has, so far, shown little break with its predecessor when it comes to Israel and Palestine. The president has decided to keep the U.S. Embassy in Jerusalem, a controversial Trump-era decision that effectively rubber-stamps the occupation. Last week, Vice-President Kamala Harris met with Israeli Prime Minister Benjamin Netanyahu to reaffirm the administration’s “unwavering commitment” to Israeli security. For Nafal, however, change comes from below:

“It is not about the administration. It is going to take the efforts of everybody in the United States and internationally to push the truth. And in time, justice will prevail.”